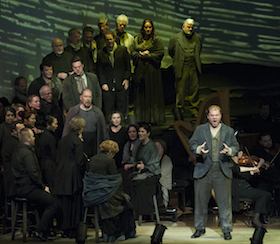 In theory, an embittered, half-crazed child abuser should not garner much sympathy from an opera audience. But when tenor Stuart Skelton, barefoot, in shredded rags, stripped of his illusions, consummated his title role in Peter Grimes by intoning his final words and walking out into the audience to drown himself at sea, his stature had become nothing less than heroic. In parallel fashion, the production itself, stripped of many of the customary opera-house illusions via semi-staging at Davies Symphony Hall Thursday with the San Francisco Symphony and Chorus, allowed Benjamin Britten’s opera to emerge in even greater inherent glory, and to drown its curtain call participants in ovations from rapturous patrons.

What did I get at Davies that I couldn’t have received across the street? (The San Francisco Opera cancelled its planned production of the opera due to budget considerations.) First of all, there was a world-class symphony orchestra and large organ — excellent as the San Francisco Opera orchestra is — and the orchestra was onstage and out of the pit for optimal acoustics. Unlike in many contemporary operas, Peter Grimes’ orchestra has a huge role — tens of minutes of unaccompanied music. Secondly, there was Music Director Michael Tilson Thomas’ great affinity for the score. He was able to thoroughly exploit its dynamic range, though he tended to drag out some of the numbers later in the opera such as Interlude IV. Thirdly, I greatly appreciated the placement of the chorus for the most part in their customary seats behind the orchestra. In staged productions, there are often just too many people milling around, especially in the bar scene. Their relative facelessness made them more of a chorus in the Greek sense. 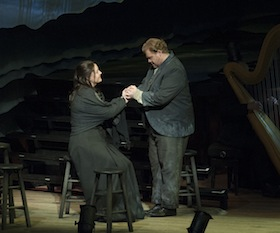 Finally, there was the stimulus to my imagination. Without detailed sets to force me into a particular director’s interpretation (as many of you know, this can be provocative sometimes, but also verge on the ridiculous), I was able make my own mental construct of Britten’s fishing village, guided by sketchy projections on clothlike screens that hung above and below the chorus, and concentrate more on the music rather than the incidentals.

There were a couple of problems with the staging, schematic as it was. A platform was built over some of the front three or so center rows of seats, and walkways were made available behind the orchestra for singers to navigate across or sing from. But the front platform, which could have been so crucial to bringing key moments to the heart of the audience, was woefully neglected. I was especially disappointed by the deeply moving female quartet “From the gutter …” in Act 2 being sung so far backstage instead of on that spot (there were TV monitors all over so the singers could see the conductor). Also, in one of the few places where the set plays an important role in the music, the Act 1 bar scene in the storm, there should have been a real door to open and unleash the tempest sounds from the orchestra, or shut with a slam and abruptly seem to cut them off. Other than these issues, however, the staging worked fine, especially considering the challenge of navigating 14+ soloists who had to navigate around the auditorium. 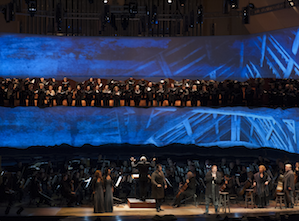 And those soloists: So wonderfully chosen, so superb in both acting and singing! Skelton certainly belongs among the greatest interpreters of his role, emphasizing Peter’s sympathetic side over the brutal. Soprano Elza van den Heever was as fine an Ellen (Peter’s “fiancee”) as one could wish. Eugene Brancoveanu’s huge baritone and winsome personality brought the apothecary Keene’s role to life. Tenor Richard Cox as the firebrand Methodist fisherman was so effective, he could double the membership of any megachurch. Alan Opie’s warm baritone was just right for Balstrode’s circumspect approach to life. Too bad Britten did not give him the best music to sing compared to the other major roles. Ann Murray, Nikki Einfeld, and Abigail Nims did fine work as Auntie and her two nieces. So did the rest of the company. And par for the course, Ragnar Bohlin’s chorus of angry villagers made me joyful at the prospect of being hounded out to sea — with them in my ears.

I cannot think of a better way to honor Britten seven months after the centennial of his birth. I only wish that opera composers today would lavish more attention on the prominence and stand-alone quality of their music, using this masterpiece as a model.