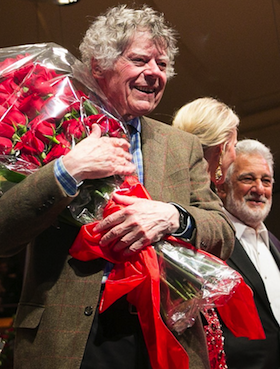 Not one to sit around finishing leftover cake from his birthday (his 80th occurred on Dec. 20) or reading reviews of his music (some of which was showcased by the San Francisco Symphony and Chorus on Jan. 6), Gordon Getty spent the first full week of the New Year preparing new and revisited compositions of his for a “reading” of some of them by members of the San Francisco Opera Orchestra and the Volti Choir.

On Thursday of that week, Getty joined the “readers” in a rehearsal room below Davies Symphony Hall. He made notations on his scores during the performance of the pieces, all of which will appear on new releases on the PentaTone Classics label later this year. During breaks, the composer chatted with conductor Ian Robertson and the instrumentalists and singers, as well as with his own staff and a few drop-ins, including San Francisco Conservatory president David Stull. Through it all, Getty exhibited the same sort of musical exuberance he’d shared with a much larger crowd, upstairs at Davies on the preceding Monday.

The program of what was billed as A Salute and Birthday Party for Gordon Getty, hosted by his son and daughter-in-law Billy and Vanessa, had invested the staid and spacious concert hall with the bubbly sweetness of a generous celebration. The Symphony’s Michael Tilson Thomas presided over a layering of Getty works between pieces by some of Getty’s favorite composers, rousingly heralded by the Cortège de Bacchus, from Delibes’ Sylvia. This was tagged by Tilson Thomas as an acknowledgment of Getty’s involvement with wine-making, one of several interests he’s pursued alongside his music and his managing a multibillion dollar family fortune.

Rather different in tone was the San Francisco Symphony Chorus’s offering of Tallis’s stark but majestic Spem in alium, for which the Chorus, conducted by Ragnar Bohlin, was divided into eight sections along the center and side terraces.

Getty’s influence on the evening’s program suggested a keen interest in different settings of the human voice, apparent also in the variety of form in his own composition.

Getty’s influence on the evening’s program suggested a keen interest in different settings of the human voice, apparent also in the variety of form in his own composition. He’s consistent, though, in seeking out poetry as inspiration, and soprano Lisa Delan effectively showcased his Four Dickinson Songs, with light and lively intonation and an ingenuous theatricality conveying both the era and the affect of the 19th-century New England poet. The composer’s musical lines, in which Delan was prettily paired by Symphony pianist Robin Sutherland, were similarly unaffected and accessible, supporting the verse and the refined but earnest emotion.

Getty openly champions and allegedly channels 19th-century tonal approaches to classical music, and there were bows to Johann Strauss in his orchestral Three Movements from Ancestor Suite. But there were also surprising and delightful hints of 20th-century Russian modernism therein, particularly in the Polka: Polonaise section. These appealing pieces of program music appear in different form in Getty’s Usher House, recently released by PentaTone Classics and due for a production by the San Francisco Opera.

The new piece’s power contrasted with the private delicacy of the composer’s soloist-and-piano outings, and suggested Getty’s mastery of broader strokes, with massed singers and instrumentalists.

On his way back to his seat from Intermission, Getty confided to a reviewer his excitement about the upcoming premiere of his A Prayer for My Daughter, which began the evening’s second half. The new piece enjoyed a splendid reading by the full Symphony and Chorus. Although Prayer made use of devices favored in the Dickinson settings, including alternating arpeggiation and unison, the new piece’s power contrasted with the private delicacy of the composer’s soloist-and-piano outings, and suggested Getty’s mastery of broader strokes, with massed singers and instrumentalists.

Both groups of musicians displayed the composer’s appeal as a colorist, highlighting sections of the chorus and orchestra (with horns and woodwinds particularly noteworthy to this reviewer) to illustrate poet Yeats’ references to sea and stormy sky. Prayer affected an impressive dynamic range, from a gutsy beginning on to a place of parental resolution, if not absolute certitude.

Plácido Domingo appeared not only to join the feting of his old friend Getty, but also to showcase his own multiple talents, which had him mounting the podium at Davies to conduct the Overture to Strauss’ Die Fledermaus, a piece well-suited to his merrily animated approach to that musical function. Another Getty friend, mezzo Frederica von Stade, took a short and charming stroll through Mahler’s "Blick mir nicht in die Lieder," from the Rückert Songs, before Domingo’s return, in the not-yet-completely-familiar role of a baritone, to sing the fatherly, heart-wrenching "Di Provenza il mar, il suol," from Verdi’s La traviata. The grateful audience, which may have found itself unprepared for this depth of emotion in this tessitura in this kind of program, rewarded Domingo with an extended standing ovation.

Both celebrity guests then returned their listeners to party mode with an engaging duet on Lippen schweigen from Lehár’s Merry Widow, which included a mock dispute at the beginning and a briefly danced waltz. After finishing the program with the Allegro con brio from Beethoven’s Seventh, Tilson Thomas and his singers led the audience in a heartfelt offering of Happy Birthday to You, whose composer is uncertain, though Warner/Chappell apparently continues to claim the copyright.

Nobody, though, could claim more happiness in Davies Hall than the object of both the public acclaim and the private approbation of fellow composer John Adams, who’d been seated close by. By the end of the evening, all of this had Gordon Getty beaming like a boy.