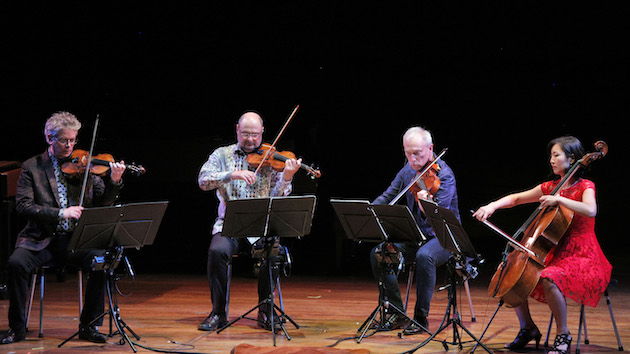 Steve Reich is turning 80 years old on October 3, and the San Francisco Symphony joined several other orchestras and arts organization around the country (and the world) to wish him a happy birthday with a concise and celebratory retrospective on September 11.

As noted by S.F. Symphony artistic director and conductor Michael Tilson Thomas, the date necessarily imbued the occasion with a degree of solemnity, which was sounded out by the Kronos Quartet in their performance of Different Trains, Reich’s Holocaust reflection from 1987. Yet the rhythmic exuberance and harmonic buoyancy of so much of the composer’s output also radiated through the night, as performances of Six Marimbas, Electric Counterpoint, and the most recent Double Sextet demonstrated once more the coherence and uniqueness of his musical style.

Reich’s musical journey, in many ways, had its breakthrough in San Francisco. He had come out west to study with Italian composer Luciano Berio only to discover, with some discomfort, that the elder modernist loathed musical repetition. By contrast, he found in the Bay Area’s bubbling experimental scene a fertile ground for his own sonic exploration.

Reich’s It’s Gonna Rain (1965) was the composer’s first process piece and presented the kernel of the rhythmic phasing techniques he has used to this day. It also featured the voice of Brother Walter, an iconic and charismatic Pentecostal preacher whom Reich recorded on a portable tape machine in San Francisco’s Union Square. It’s Gonna Rain’s deliberate and inescapable evolution of rhythmic degeneration from spoken words into noise (caused by the progressive misalignment of a short audio loop) played over Davies Hall’s loudspeakers before the beginning of the concert, which served both as a tip of the hat to the hardcore fans, and as a reminder that Reich’s music can be as disturbing as it is “groovy.”

The glowing sonority of Six Marimbas (a 1986 arrangement of 1973’s Six Pianos) encapsulated perfectly the contrast between Reich’s austere early years and his more euphonious middle period. Phased melodies produce entrancing interlocking patterns, and sudden harmonic shifts provide a periodic refreshment of the soundscape. Compared to its piano version, Six Marimbas sacrifices a degree of textural clarity (especially in a space as resonant as Davies) in exchange for a luxurious, enveloping timbre — one that invites the listener to truly “zone out” and let the patterns work their psychoacoustic magic.

A programming change resulted in more contrast: Different Trains was moved into the first half to offer a counterweight to Six Marimbas, in place of the more sonically analogous Electric Counterpoint. These two pieces, which are contemporaneous and released as two sides of an Elektra album in 1989, could not differ more in scope and aesthetic. Different Trains parallels the composer’s frequent transcontinental railroad trips (his parents were separated) in the summers of the early 1940s, with the very different train rides that European Jews were forced to take during the Second World War. The music is drawn from patterns of speech, and overlaid with both source recordings (mostly interviews done by Reich himself and featuring three Holocaust survivors, his own governess Virginia, who accompanied him on the trips, and Pullman porter Lawrence Davis) and prerecorded tracks of the string quartet itself. The musicians’ main task is to highlight the relationships between the performed music itself and the source material, as short rhythmic patterns are repeated to reveal their correspondence with fragments of speech. The somber subject matter, conjured semantically by the survivors’ tales, was given a visceral reading by Kronos. The piece was written specifically for the quartet, and they conjured a claustrophobic, harrowing atmosphere in the work’s climactic second movement.

Originally written for jazz guitarist Pat Metheny, Electric Counterpoint also features a live musician accompanied by prerecorded versions of the music, but it dwells in a much brighter (and seemingly carefree) musical world. A complex series of canons and additive melodies for up to 12 parts results in ever-changing tapestries, which were navigated expertly by guitarist Derek Johnson. Some of the procedures as well as the source material employed here point to Reich’s long-time fascination and study of African musical traditions. In this case, themes inspired by a Central African horn canon from the Banda Linda tribe, a group Reich encountered through the work of ethnomusicologist Simha Arom, become the basis for the first movement.

The most recent work on the program, Double Sextet (2006) was performed by members of the S.F. Symphony and guest ensemble (and co-commissioner) eighth blackbird in its sanctioned “live” version — the work also exists in a version for ensemble and prerecorded tape. Scored for pairs of pianos, vibraphones, cellos, violins, clarinets, and flutes, the piece mirrors Electric Counterpoint and Six Marimbas’ fast-slow-fast structure. It also emulates Six Marimbas’ unprepared modulations (outlining, in this case, a fully diminished seventh chord), and the rhythmic irregularity of Different Trains. It was a perfect capstone for the evening. An additional, unannounced treat came when the composer himself joined Tilson Thomas immediately after the intermission for an abridged performance of his most minimal piece, Clapping Music (1972). The moment reminded us to keep the ludic element at the forefront of our lives, no matter our age.

For more about Reich's ongoing creative activity and musical celebrations of his legacy, please read "Steve Reich Is Running Strong." 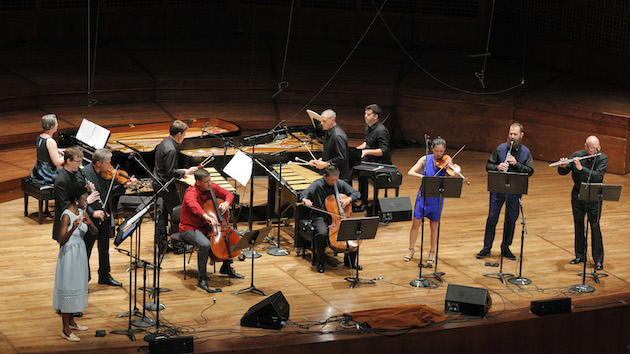