Arnold Palmer, master of the two-handed baton, had this to say about musicianship:

It is not a dreamlike state, but the somehow insulated state, that a great musician achieves in a great performance. He's aware of where he is and what he's doing, but his mind is on the playing of the instrument with an internal sense of rightness — it is not merely mechanical, it is not only spiritual; it is something of both, on a different plane ...

“Relic of Modernism” Best for Trumpet 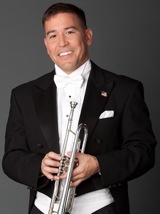 The concert began with a “relic of Modernism,” according to MTT — one as oddly shaped as Palmer’s baton, Cowell’s 1930 Synchrony. Its plane was experimental and kaleidoscopic, a work of progress declaredly derived from its opening material, but not easily apprehended as such. Its abrupt end leaves you with a feeling of structural incompleteness.

But what opening material! A striking yet muted, minute-long trumpet solo by Inouye. It alone was worth the price of admission, the way he played it: This initial material was so inherently interesting that nothing better could be added during the remaining 12 minutes of the work. No wonder it hasn’t been played anywhere in North America in the last 10 years.

Next came Mozart’s Violin Concerto No. 5, K. 219, brilliantly clarified by the angelically smiling, fidgety-footed Shaham. His tone was too full of life to be merely heavenly, yet at the same time was extraordinarily lucid, perfect for A Major Mozart. The result generated very warm applause, 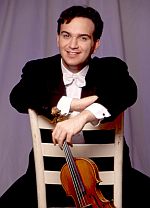 But then came intermission, and a chance to improve the percent approval for the next work even more, since 15 to 20 percent of the audience, presumably not fans of living composers, did not return to its seats. And Adams’ Harmonielehre did indeed please mightily, receive four minutes of cheers and bravos at its conclusion — and even spontaneous applause between movements. Why?

I give the credit to MTT, who outdid himself injecting passion into this music. During one particularly vigorous exhortation in fact, two minutes before the end of the first movement, his baton escaped his grasp, took flight on its own, and sought a new owner among listeners in Row A. (The escapee was returned to its wielder in time for the next movement.)

What MTT did was capitalize on his mastery of Gustav Mahler to highlight and squeeze forth the Romantic leanings in this work, gestures which are unusually prevalent for Adams in the first two movements. This emphasis did much to add yearning to the heartbeat of the drier, yet equally pervasive motoric elements harkening back to Adams’ earlier, more Minimalist style. The result was a first movement that was not just exciting, but genuinely moving.

The Symphony’s late annotator Michael Steinberg makes reference to the second movement and the debt Adams owed to the dismal sonorities of Jean Sibelius’ Symphony No. 4 in depicting spiritual and physical infirmity (the “Anfortas Wound”). I also was reminded of similar sounds in Gustav Holst’s “Saturn, the Bringer of Old Age” movement. MTT did a great job here in assuring the widest dynamic range of sound, making the climax of the movement especially shattering.

Only the third movement to me seems less than completely successful as a composition, though, like the previous movements, extremely well performed. It begins with an ethereal tableau imagined by Adams: the Medieval mystic Dominican Meister Eckhardt “floating through the firmament with a baby on his shoulder. But later Adams says there is “a tremendous harmonic struggle” with “different tonalities vying for dominance.” Because there is little functional harmonization (e.g., modulation), just the warring tonalities, the feeling of stasis generated by the gorgeous opening section does not evolve away. Only the loudness and rhythmic energy increases, weakening somewhat any complete sense of closure when the E-flat tonality just ends up being a little louder than the other at the conclusion.

But make no mistake about it, Harmonielehre is one of Adams’ greatest achievements, and a work the San Francisco Symphony should be especially proud of for commissioning way back in 1984. That MTT and the Symphony musicians went all out to maximize that greatness puts them in a club worthy of Arnie’s Army.