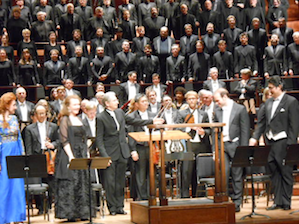 The San Francisco Symphony’s Beethoven Project reached a radiant high point over the weekend, as Music Director Michael Tilson Thomas returned to the composer’s Missa Solemnis. With the conductor, the San Francisco Symphony orchestra and chorus, and four vocal soloists pouring their considerable energies into Beethoven’s monumental late-life work, the festival in Davies Symphony Hall achieved the kind of brilliance and grandeur worthy of its namesake.

Challenging and audacious, Missa Solemnis is a huge mountain for any music organization to climb. Composed to texts of the Latin Mass – the Kyrie, Gloria, Credo, Sanctus and Agnus Dei — the 75-minute score is a work of extremes marked by complex choral writing and sudden shifts in rhythm, harmony and character. It was conceived as a tribute for the 1820 installation of Beethoven’s friend, pupil and patron Archduke Rudolph as archbishop of Ormutz, Moravia; Beethoven, who worked on the score between 1819 and 1823, missed his deadline by a long shot, but expanded the boundaries of the traditional Mass. The result is a fervent plea for peace from a composer who had lived through decades of war, an exploration of exalted spirituality from a man who was still struggling with the limits of faith.

Thomas had last conducted Symphony performances of Missa Solemnis in 2011, and at Saturday’s performance, the second of two, he came back to it with renewed energy. The results were tremendous — poised, dynamic, and cohesive. The conductor evoked the work’s enveloping sense of wonder from the start of the spacious Kyrie, and the sound in Davies Hall bloomed accordingly — the mellow strings and ripe horns, the woodwinds weaving in and out, Ragnar Bohlin’s 120-member chorus singing with pristine tone.

The Gloria was, well, glorious — brisk and urgent, delivered in a blaze of orchestral color and texture. In the “Qui tollis,” the vocal soloists — soprano Laura Claycomb, mezzo-soprano Sasha Cooke, tenor Michael Fabiano, and bass-baritone Shenyang — delivered their “misereres” with affecting poignancy. The chorus articulated the intricacies of the fugue on “In gloria Dei Patris” with jaw-dropping precision.

The Credo unfolded organically, with power and majesty, and Fabiano’s account of the Incarnation, sung with unadorned eloquence, simply pulsed with drama. Thomas savored the dark sonorities of the Sanctus, eliciting glowing, luxuriant sound from the orchestra.

One of Beethoven’s most arresting innovations comes in the Praeludium to the Benedictus, a long-breathed concerto for violin, at first accompanied by two flutes, in a spellbinding musical depiction of the Holy Spirit descending to earth. Playing with sweet, liquid tone, concertmaster Alexander Barantschik made it an enveloping episode. 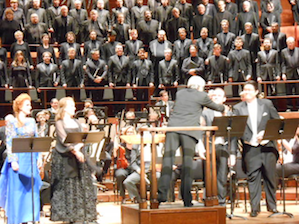 The performance built to an infinitely touching Agnus Dei — martial music that transcends, as Beethoven brings together the orchestra, chorus, and soloists in a final outburst of melting beauty. The composer’s “Dona nobis pacem” — the cry for peace — arrives without firm resolution. It’s here that the sum total of Beethoven’s experience is audible: in the composer’s lifetime, as in our own, nothing is guaranteed. Thomas drew his forces together masterfully, with great sensitivity.

Saturday’s soloists gave rich, fully committed performances. Fabiano was the standout; the tenor’s robust vocalism and dramatic instinct combined in potent contributions. Claycomb projected attractively, her lithe,crystalline soprano audible in even the densest thickets of sound. Cooke’s mezzo is plush and lovely, and Shenyang sang with luster in the opening of the Agnus Dei. Jonathan Dimmock made essential contributions at the Symphony’s Ruffatti organ.

As always, though, the Missa Solemnis rests on the shoulders of the chorus, and Bohlin’s ensemble sounded magnificent throughout the evening. Before intermission, Bohlin conducted the chorus in the Kyrie, Gloria, and Agnus Dei from Palestrina’s “Missa Papae Marcelli.” If the music paled beside the evening’s main event, his singers were exemplary.