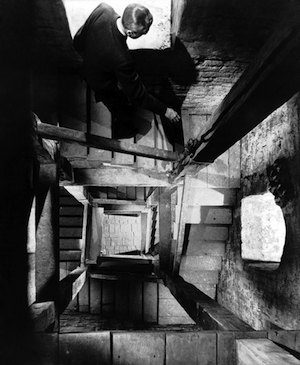 Jimmy Stewart, playing a former detective (Scottie Ferguson) in Alfred Hitchcock’s movie Vertigo, chased his obsession with Kim Novak (Madeleine Elster), all over San Francisco and the surrounding area. Those enamored of that 1958 thriller, and/or with its orchestral score by Bernard Herrmann, needed only to secure a seat at the sold-out Davies Symphony Hall on Friday to indulge their own obsessions.

After the lights were dimmed, the restored film was projected in huge, living color images, below which the San Francisco Symphony, dressed in all black, performed the full score, live in a world premiere, conducted by Joshua Gersen. It was a thrilling experience, even for those like your reviewer who do not count themselves among the obsessed.

Last year, Vertigo ascended to the top of the British Film Institute’s list of the greatest films ever made, based on input from critics, academics, programmers, and distributors. For the first time in a half-century, it displaced Orson Welles’ Citizen Kane (for which Herrmann also provided the music). 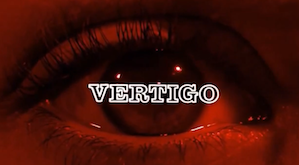 The problems I have with placing either film at the top of my own list lie primarily with the story lines and scripting. Both films are rather obsessed with their own stylization, to the degree that the stories’ plot points are at times disjoined and/or implausible. I’ve seen Vertigo several times, and seeing it at Davies, with superior projection and sound (both live and from the soundtrack), still failed to establish for me the degree or influence of Scottie’s pathology, a mix of the title dizziness and acrophobia which figures in the film’s opening scene of a police pursuit and in his thwarted attempt to follow Madeline up the heights of the fatal bell tower.

But film criticism isn’t my principal assignment here, and I should state that I’m thoroughly convinced that Herrmann’s music does its best to “sell” the movie's scenes, add believability, and to maintain a forward motion and an unavoidable level of tension throughout the rest of the movie. This was effectively manifest at Davies Hall, despite the contemporary audience’s succumbing recurrently to inappropriate laughter, perhaps evoked by the outdated affect of some of the dialogue and melodrama.

The composer’s innovation and mastery of orchestration were manifest from the outset at Davies, accompanying the film’s modernist opening credits with a simultaneous ascending and descending tortured arpeggiated chord for strings, interspersed by insistent blasts from the brass.

It could in fact be that Herrmann’s take on Vertigo has weathered the decades better than Hitchcock’s, and can better stand on its own. (As I understand it, the Vertigo music is sometimes programmed as an orchestral suite.) The composer’s innovation and mastery of orchestration were manifest from the outset at Davies, accompanying the film’s modernist opening credits with a simultaneous ascending and descending tortured arpeggiated chord for strings, interspersed by insistent blasts from the brass.

There’s an elegance, but also an intentional lack of resolution, to the music accompanying Scottie’s pursuit of Madeleine through a sequence of familiar San Francisco locations, including Mission Dolores, where the voicings become particularly sweet, with a bit of organ, but still irresolute. Unwedded to the Viennese Romantic traditions favored by many of his Hollywood predecessors and contemporaries, Herrmann is less interested in memorable melodies than in impelling motifs, typified by the falling strains against which Scottie and Madeleine motor along 17 Mile Drive. This may be why Herrmann at times seems to be channeling the theatrical power of Richard Wagner, particularly in the so-called Scène d’amour, where Scottie, convinced that he’s successfully refashioned Judy as the deceased Madeleine, embraces her.

Herrmann is also a master colorist, with a canny understanding of the psychological potential of the different sections of the orchestra, setting them effectively against each other and allowing individual voices such as celesta, chimes, or double harps to sound out. Though he generally avoids trite conventions on which lesser composers have depended, Herrmann does allow for an alluring habanera to invoke the memory of Madeleine’s (or is it Judy’s?) early Californian ancestor, Carlotta Valdez.

The SFS showcased Herrmann’s art at Davies with flawless virtuosity and appropriately articulated dynamics and pacing, under the confident baton of Gersen.

The SFS showcased Herrmann’s art at Davies with flawless virtuosity and appropriately articulated dynamics and pacing, under the confident baton of Gersen. There were moments, including the scenes at the Mission of San Juan Bautista, where the orchestra in tutti fortissimo bordered on overpowering the spoken dialogue. But it was an indicator of the Symphony’s overall success that some of the most sophisticated of my fellow audience members confided to me afterwards that they’d repeatedly forgotten, during the screening, that they were listening to live musicians.

I’ve been lucky enough to observe a studio scoring session in Los Angeles, which alerted me to the high level of musicianship among both film and tv composers and the world-class musicians they gather to record their scores. Here in San Francisco, we’re lucky to have our own premium orchestra investing our movie-going experience with wonderful warmth and majesty.