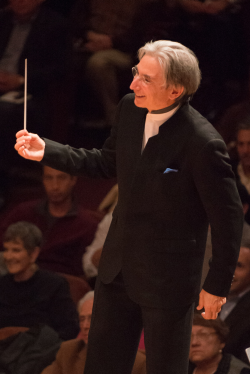 There was a lot of excitement at the San Francisco Symphony Saturday night. There always is, when Michael Tilson Thomas conducts Beethoven. But even by this orchestra’s high standards, this was a thrilling, surprising — and even alarming — night.

Tilson Thomas and the orchestra are midway through their two-week “Beethoven Project,” parts of which are being recorded for future release. Designed to showcase rarities alongside the composer’s better-known works, it’s the kind of event that gives audiences plenty to hear, learn about, and come away feeling shaken, stirred and newly humbled by the genius of Beethoven.

Saturday’s program at Davies Symphony Hall, which included Beethoven’s Symphony No. 4, “Three Equali for Four Trombones,” and “An die ferne Geliebte,” achieved all of the above. But the evening’s runaway hit was John Adams’ Absolute Jest for String Quartet and Orchestra. This was the Symphony’s second time around for Adams’ dazzling 25-minute love letter to Beethoven — Tilson Thomas and the orchestra presented its world premiere in Davies on March 15, 2012, with the St. Lawrence String Quartet as soloists — and this performance re-affirmed its brilliance, and then some.

Adams riffs on Beethoven throughout the score, incorporating themes from the scherzos of the string quartets in C-sharp Minor, Op. 131, and F Major, Op. 135, as well as bits from the Grosse Fuge, the Ninth Symphony, and the Waldstein Sonata. He deconstructs these fragments, weaving them into his own outsized scherzo. The string quartet — Saturday, it was the fabulously ebullient St. Lawrence once again — plays an integral role, driving the piece here, receding there, occasionally emerging in a blaze of almost blinding light. Saturday’s audience heard the score in its revised form: after the 2012 premiere, the composer re-wrote the introduction, adding 400 bars of new music, and if anything, it emerged sounding even more articulate and engaging. But Absolute Jest was already a blast — keen, propulsive, and wildly inventive, as only Adams can be.

The program started with Three Equali for Four Trombones. This was the evening’s rarity — the Symphony had only played it twice before, most recently in 1979 — and it made a lovely curtain-raiser. Composed in Linz in 1812, and likely first performed that year on All Soul’s Day, this trio of funeral works is solemn and expressive, and it received a shapely performance by Timothy Higgins (alto trombone), Mark H. Lawrence and Paul Welcomer (tenor trombones), and John Engelkes (bass trombone).

Michael Fabiano was the soloist for “An die ferne Geliebte.” Beethoven’s 1816 song cycle isn’t quite the same kind of rarity — 20th-century singers from Dietrich Fischer-Dieskau to Fritz Wunderlich performed and recorded it — but it hadn’t appeared on a Symphony program since 1981. Fabiano, making his Symphony debut, was an excellent choice. Opera lovers will remember the tenor in last fall’s San Francisco Opera production of Lucrezia Borgia — as Gennaro, his muscular vocalism and keen dramatic presence nearly stole the show. Accompanied with skill and sensitivity by pianist John Churchwell, Fabiano brought those qualities to Beethoven’s songs, composed to the “distant beloved” on texts by Alois Isidor Jeitteles. Singing with ardent, aristocratic tone, he evoked a world of sensuality in their spring breezes, verdant forests and soft twilights.

After intermission, Tilson Thomas revived Beethoven’s Symphony No. 4 — hardly a rarity, but one that orchestras don’t perform nearly enough. Conductor and orchestra breathed considerable life into the score — until a fire alarm, activated at the end of the third movement, brought the performance to a sudden halt. Amid flashing lights and sirens — which inspired a goofy, impromptu singalong — the orchestra and the audience waited it out, and when the all-clear was announced, the performance resumed. Minus the alarm, the performance was splendid; audiences can hear the final repeat on Thursday.