Only pieces two were on offer: Grieg’s Piano Concerto in A Minor, Op. 16, and Shostakovich’s Symphony No. 8 in C Minor, “Stalingrad,” Op. 65. As that symphony runs a bit over an hour, no encore was forthcoming, though much of the audience would have loved hearing Trpčeski play again.

The effectiveness of Grieg’s sole concerto is undeniable. Rachmaninov, who knew a thing or two about such forms, called it “the perfect concerto.” Yet many people will turn up their noses at the very mention of its title, as if to say, “Oh, that old thing.” In a refreshing performance such as was heard in Davies Symphony Hall on Thursday, it should be enough to convert all doubters. 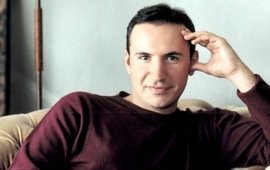 The method used by Trpčeski was simple enough. Rather then cheapen the piece with tawdry, hard-sell tempos and exaggerated dramatics, Trpčeski and his conductor highlighted the gentility in the music. Partly that was a matter of excellent tempo selections. Both fast movements, for instance, have their Allegros softened by qualifications such as “... molto moderato” on the first movement and “... moderato molto a marcato” on the finale. In each case, the artist is being cautioned not to hurry — something that all too many pianists do, but not Trpčeski.

Grieg’s Concerto contains its share of thunderous bravura, yet on the whole this concerto is dominated by lyrical music. More-relaxed tempos, such as those that Trpčeski and Petrenko applied, are essential to bringing forward that virtue. That, and the ability to sustain soft, quiet passages, which is extremely difficult. Being quiet for long periods is hard in all endeavors (especially for cell-phone users).

At Davies, the ensemble work between pianist and conductor was flawless. Of course, the fact that both trained at the St. Petersburg Conservatory more or less ensured uniformity. Then too, they have performed and recorded together, as well as toured as a unit.

Trpčeski possesses a full, virtuosic technique so complete that he can display it without making an issue of it. His crisp, staccato playing twinkled like fireflies, and his smooth legato playing virtually purred. That last quality made for a scrumptious account of the great Adagio. The warmth of sound from both pianist and orchestra was as fine as I’ve ever encountered. I’ll bet they could do terrific Debussy or Ravel.

Battle Cries, Over and Over

Shostakovich had planned to write three symphonies about World War II battles, yet finished only the first two: the Seventh “Leningrad” Symphony, and the Eighth, which for some odd reason is rarely listed with its subtitle, “Stalingrad.” The Eighth stands in five movements but can almost be considered in six, since it opens with quite a long Adagio introduction to its Allegro, which is almost a normal movement in itself.

That’s followed by an Allegretto, a martial Allegro, a barely breathing Largo, and another Allegretto. 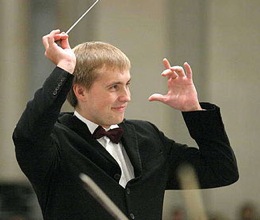 The dour “Stalingrad” Symphony is long, problematic, and heavy on the bombast. Being about a hideous battle, that’s to be expected, I suppose. To me, though, it sounds heavily padded. There are far too many repeated phrases that go on and on ad nauseam, and when they’re coupled with the bombast, a listener can understand its relative neglect in the world’s affections. Nor is the work structurally sound. (Even Solti’s recording failed to pull it together.)

Petrenko, making his SFS debut, came closer to achieving success with this work than I’ve heard from others on the podium. For one so young — he was born in 1976 — he has conducted major orchestras in Russia, London, Berlin, Paris, Frankfurt, Rome, the Hague, Budapest, and Tokyo. On this continent, engagements beckon in Boston, Los Angeles, and Atlanta.

He’s also done opera for the St. Petersburg Opera, Netherlands Reisopera, the Hamburg State, the Paris Opera, and at Glyndebourne. Since 2006, he’s been conductor of the Royal Liverpool Philharmonic, with which he’s made award-winning recordings.

He wields, to use musicians’ slang, a nice stick. His baton technique is fluid, clean, and unexaggerated, though he did get a little carried away when urging on the orchestra during the frenzied passages of the Shostakovich. He cues well but in proportion, not distracting the players with every single little possibility. Best of all, he has a keen sense of form as well as tempo. I neither saw nor heard a major problem in his musicality.

I hope to experience Petrenko here again, and often. Only, next time maybe he’ll bring a better major work.