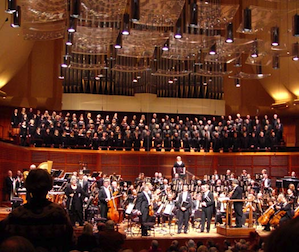 Music speaks when words fail, it is said, so what to use to describe a sublime musical experience?

The response in Davies Symphony Hall — a minute of unprompted silence at concert's end before a long, heartfelt standing ovation — points the way, but unfortunately not applicable to written communication such as this. Perhaps a substantial blank space?

Of the dozen live performances I have heard on three continents of Britten's magnificent War Requiem, Saturday night's San Francisco Symphony presentation was not only among the "best," but also something apart from all previous experience, including even a very special evening in Santa Rosa, which surpassed numerous others in metropolitan venues, especially the one in San Francisco 11 years ago.

Besides almost uniform excellence in performance, Semyon Bychkov's direction of an orchestra at its very best and Ragnar Bohlin's brilliant SFS Chorus gave an utterly moving War Requiem without a smidgen of sentimentality. That's an exceptional accomplishment when dealing with this emotionally overwrought elegy over the senseless slaughter (16 million deaths and 20 million wounded) of World War I. 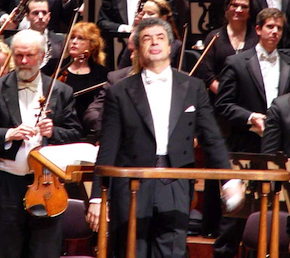 The extraordinary finale relieved the work's tragic impact, bringing a tearful serenity, catharsis. Here, with more power than at any other time in the performance, all fused, came together, overwhelmed.

Kevin Fox's Pacific Boychoir sang gloriously behind an open door above stage left, the voices gaining an otherworldly distance, the youngsters not faced with the need to stay in view for 90 minutes without twitching a muscle or two — always a greater challenge than singing. A wise, effective arrangement.

All evening long, Gilchrist and Williams sang with crystalline diction and deep musical-emotional sensitivity. One-time Wagnerian diva Christine Brewer, who has performed the difficult soprano solo in the Requiem numerous times, still has some of the power, but strain is overwhelming the former beauty of the voice. 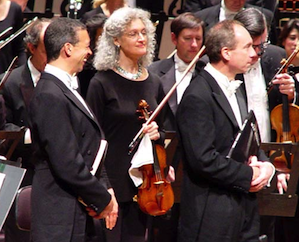 Bohlin's SFS Chorus went from one high point to another: their quiet, moving "Kyrie eleison" (Lord have mercy) yielded to the men's powerful "Dies irae," the women's pulsating "Quantus tremor " (What trembling); then the affecting "Recordare Jesu pie" (Recall, merciful Jesus); and the orgiastic, Orff-like "Confutatis maledictis" (When the damned are confounded).

Repetition of the "Dies irae" was huge, then the syllables of "Quantus tremor" uttered as bullets; the crescendo and climax of "Sanctus, sanctus" (Holy, holy) penetrating the big hall. Then, in the "Agnus Dei" (Lamb of God), the chorus produced an attenuated sound that was near-inaudible (on purpose), resembling a far-away drone. Similarly, a cappella endings of the "Requiem aeternam," "Dies Irae" and the last movement were whisper-quiet, very beautiful.

On the overcrowded stage — in an unusual configuration of a chamber orchestra where the first violins usually are, and sections divided — there were many appealing-impressive solos (woodwinds and brass shone all the way through), but Bychkov's greatest achievement was to move the music forward steadily in perfect balance.

In the ad-hoc "chamber orchestra," concertmaster Alexander Barantschik, associate principal cellist Peter Vyrick, principal clarinetist Carey Bell — along with the others — put their all into the performance. The brass, scattered around the stage, came through unfailingly.

And finally, kudos to the audience. Yes, there were coughs and unwelcome sounds, but relatively few, and — to explain the reference above to the "unprompted silence" at the end — Bychkov trusted the audience to do the right thing without holding up his arms to save and savor the silence, and more than 2,000 people came through together and without exception.

(Look for the broadcast of the War Requiem on KDFC-FM in the next couple of weeks.)