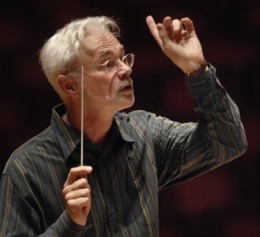 A new composition needs not just to be performed. Success comes when it is performed more often than once or twice. Works by John Adams generally get performed many times. This month the San Francisco Symphony is adding to his total by playing two classic Adams works that have been heard here before. This week it was the turn of El Niño, and I heard Thursday's performance at Davies Symphony Hall. The composer conducted.

I could add, irreverently, that the mark of a successful holiday is that it inspires a lot of successful new compositions. Seriously, people seem to have a spiritual or aesthetic need for Christmas oratorios, and Handel's Messiah is not enough. A few weeks ago I reviewed a performance of Vaughan Williams' Hodie, a work of the mid-20th century. Adams' El Niño, which received its first American performances here in January 2001, a month after it premiered in Paris, is an oratorio for the turn of the new century.

Like Hodie, El Niño is highly characteristic of and personal to its composer — and, like Hodie as well, it echoes, even challenges, Messiah at times. The elaborate tremolos in Adams' "Shake the Heavens," so reminiscent of Handel's setting of the same words, and even more of his "For He is like a refiner's fire," are the obvious example. The orchestration is in Adams' usual pulsating post-minimalist style, which listeners either like or don't. I am one who does; fortunately for those who don't, there's little pure orchestral music in this work. For whatever reason, possibly because the orchestra was split in halves with a platform for the singers in the middle, the orchestral sound was more pointed and raucous than on Kent Nagano's recording, and evoked the Michael Nyman Band. 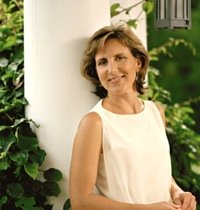 Some of the vocal parts, especially for chorus, are in fragmented, chopped-up words, matching the orchestration. Much, though, is in smooth chromatic lines that float above the instruments.

Soprano Dawn Upshaw and the trio of countertenors, Daniel Bubeck, Brian Cummings, and Steven Rickards — the three sing mostly together and as a group form a prominent soloist — all sang in the first performances of this work, 10 years ago, and the remaining soloists, mezzo-soprano Michelle DeYoung and bass-baritone Jonathan Lemalu, have also both sung El Niño before. (Jessica Rivera was scheduled to sing the soprano role in Friday's performance.)

Upshaw is, of course, this generation's leading new music soprano. Her gift for line and characterization was gloriously evident throughout the work, especially in the powerful "Memorial de Tlatelolco," Rosario Castellanos' poem on the Mexican police riots of 1968, inserted by Adams to reflect on Herod's Massacre of the Innocents. DeYoung has a low, thick, powerful voice with a heavy vibrato, more bullish than that of the late Lorraine Hunt Lieberson who created the mezzo role, and markedly disinclined to meander during her long solo, "La Anunciación." 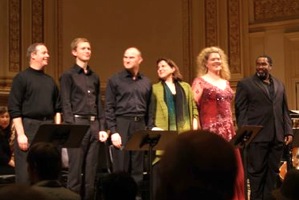 Lemalu's strong New Zealand accent was more evident in the postconcert talk than during the performance. He has an interesting voice: rough, crusty, more light and flexible than its depth would suggest. Like DeYoung, he's a fairly straight-ahead singer, who coped well with the thankless task of portraying vehemently the malign Herod and the often clueless Joseph. Lastly, the three countertenors have deepened their voices since the premiere a decade ago, making them less ethereally weird than in the recording made then. They were nevertheless a clear, powerful ensemble, particularly as a three-in-one angel Gabriel delivering the good news to Mary.

The San Francisco Symphony Chorus, standing up in the terrace, simply refused to be drowned out by the orchestra in front of and below them. They were superb throughout, firm and emphatic. A good word also goes to the San Francisco Girls Chorus for their brief appearance at the very end, strong and not wispy.

The staging, directed by Kevin Newbury with sets by Daniel Hubp, was plain. The midstage platform had a wooden table and chairs for props. The lighting, by Kirk Bookman, was subdued. Illuminated backdrops of blue in part one and green and white in part two set the visual tone. Adams, conducting from near the corner of the platform, was inconspicuous from the audience. The hall was kept dark to focus attention on the stage, not on reading the program book, and the words were projected on supertitles anyway. 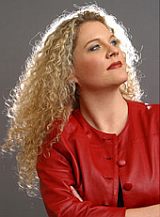 Costumes, by Paul Carey, were simple. Upshaw was in sweater and jeans. DeYoung and Lemalu wore colorful, unostentatious robes suitable for Biblical pageants. The countertenors were in white from neck to toe, the main chorus in black, the girls' chorus in outfits similar to Upshaw's. Stage movements were limited. DeYoung dropped to her knees during "La Anunciación," but was not required to writhe on the floor while singing, as Hunt Lieberson did in the premiere. Viewers of the DVD of the original production will also be pleased to know there were no dancers butting in, and no distracting videos: Peter Sellars, begone.

The libretto, compiled by Adams, with Sellars' assistance, from the Bible, apocryphal gospels, medieval sources, and Latin American poetry, tells a personal, character-oriented story from the Annunciation of Mary through Jesus' apocryphal infant miracles. The overall thrust of this performance was not narrative in effect. Perhaps due to Adams being an energetic rather than an imposing conductor, it chugged along consistently, in the spirit of the pulsating accompaniment, emphasizing the moment-by-moment pleasures of the music instead of a dramatic arc.

These pleasures were considerable. Like all of Adams' work, this is a composition that could not have been written without the history of 20th-century music behind it. It's come through the rigors of that century's music and out the other side: attractive without being conventionally tunefully catchy, and accessible without being even remotely retrograde. It's warm Christmas music that was, rightfully, warmly received.