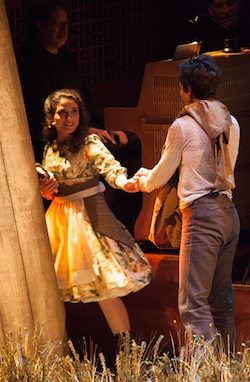 In a bold and successful move, Michael Tilson Thomas and the San Francisco Symphony have condensed Henrik Ibsen's 1876 Peer Gynt into an outstanding musical-dramatic multimedia production.

Following a string of semistaged hits — Flying Dutchman, Barbary Coast, and The Thomashefskys among them — Peer Gynt might have been the greatest challenge, presenting in less than two hours a five-hour, virtually unperformable, bizarre fantasy/nightmare, written for a huge cast, with 40 scenes alternating in time and space.

Ibsen, who wrote the work in rhyming verse, originally did not intend it for the stage. Dramaturgically impossible, the play is chock full of ideas, philosophical and psychological gems, such as the consideration of what is "enough" — should man be enough for himself or is there something more? — and the consequences of living by the maxim of "go around," avoiding issues and commitment.

MTT/SFS not only dealt with the theatrical challenge on a sliver of the concert stage (a daunting task in itself), but enhanced the drama with the work of three composers: much of the well-known Grieg incidental music, six excerpts from Alfred Schnittke's ballet suite, and the premiere of Robin Holloway's Ocean Voyage, part of a large, yet-unperformed work on the theme of Ibsen's play. 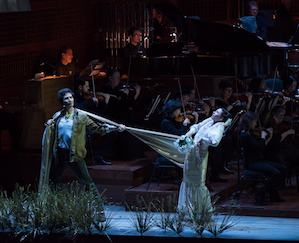 How to get to the heart of the play? If it has one, it's similar to that of Gynt himself, as revealed in the scene with the onion (not included in the SFS presentation). As Gynt peels an onion, he compares his many selves to the layers: the cheat, liar, survivor, gold-digger, betrayer. He says:

There's a most surprising lot of layers!
Are we never coming to the kernel?
There isn't one! To the innermost bit
It's nothing but layers, smaller and smaller.

When the layers are gone, nothing is left — not in the onion, not in Gynt, and perhaps not in the play. And yet they all, including the SFS production, are saved by romantic, sentimental, redeeming love as abandoned, wronged, ever-faithful Solveig cradles the unworthy anti-hero, and Ragnar Bohlin's SFS Chorus sings gloriously Grieg's Whitsun Hymn.

It's very moving, especially if you don't think much about it; a scene more of Les Mis' manipulative theatricality than one that conveys the true catharsis of many great finales in music and literature. 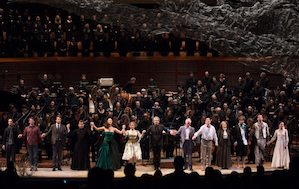 With exceptional work from the orchestra, silk-smooth passages from the strings, MTT maintained flawless balance throughout, and the Grieg and Schnittke excerpts were ravishing. Holloway's composition — used in place of the entire Act 4 sea voyage — is robust and gripping, but it was played in excess, running about twice as long as it should have. (SFS should have heeded Ibsen's warning about "too little, too much, not enough.")

The Holloway piece is followed by an equally long text-only portion, the second half of the concert in unfortunate contrast with the finely balanced music-theater structure of the hour-long first part. 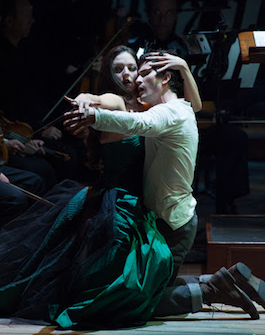 Actor Ben Huber in the title role would have been perfect if overamplification didn't distort some of the text; his excellent diction mostly overcame the needless obstacle. Huber's stage direction, using all possible spaces, must also be credited for the all-around good diction, so vital in this presentation. For the remaining performances, volume should be taken down several notches, so no longer will a single voice boom over the sound of the entire orchestra.

As the only singing actor in the cast, Joélle Harvey was sensational in every way; her performance of "Solveig's Song" and the "Cradle Song" were thrilling.

Among actors, all performing well, Rose Portillo's Mother, and Peabody Southwell's statuesque, steamy Troll Princess were outstanding. Gynt's romantic adventure in the Troll Kingdom was displayed front and center in a scene preconcert lecturer Laura Stanfield Prichard warned about, suggesting to parents they tell children to close their eyes. I managed to look, and was much more upset by the booming, distorting overamplification of voices.

Four actors, including Huber himself in one instance, mispronounced the character's name during the performance, saying "peer" instead of "per." Speakers of Norwegian and literature majors must have had a good chuckle.