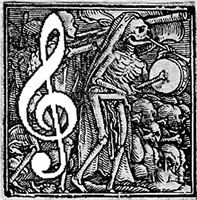 “Ravishing Rachmaninov” was certainly an attractive official title for Wednesday’s San Francisco Symphony concert. But, marketing aside, it really was all about the dead: the memories of the many accompanied at ceremonies by Samuel Barber’s Adagio for Strings, the victims of the Spanish civil war memorialized by Benjamin Britten’s Violin concerto, and the struggles with the Dies Irae and the loss of Tsarist Russia suffusing Rachmaninov’s last orchestral work, Symphonic Dances. Presiding over these services was the expressive yet detail-oriented guest conductor Stéphane Denève.

Barber’s familiar adagio, voted the saddest classical music piece by BBC listeners — played at the deaths of most presidents starting with FDR, and featured in 12 films (including Platoon, where people often don’t even hear it, pervasive in the score as it is) — tests the ability of the string section to develop maximum intensity at its climax. Denève started out the right way by waiting for the utmost silence in the auditorium before beginning at the faintest pianissimo. Of course, as soon as he started, someone coughed. But persisting, Denève managed the curve of the music well. The climax seemed a little less intense than many performances I’ve heard.

Next, in her San Francisco Symphony debut, came violinist Isabelle Faust for the Britten. Her performance and technique were as striking as her bright red, serape-like blouse that evoked the spirit of Iberia. Her powerful double stops had my jaw dropping in amazement, and the rest of her technique did thorough justice to Britten’s rhythmic and often spiny “Requiem for the lives lost.” The only element missing from her interpretation was her failure to take full advantage of the few moments of tenderness in the music. The concerto is powerful stuff, with an unconventional yet inexorable passacaglia placing the soil on the graves of Republican heroes in the last movement. Faust is a remarkable force of nature. I’d love to see her return in a traditional Zakopane costume to do Szymanowski’s Second concerto. 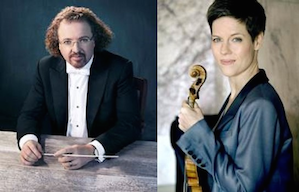 After intermission, Denève addressed what might be considered, along with Shostakovich’s 15th symphony and Elgar’s The Music Makers, a composer’s testament to life and art. The curve of both a day and a life is suggested by the three movements’ original titles “Noon,” “Twilight,” and “Midnight.” The first features one of Rachmaninov’s greatest long-limbed melodies, a C-Sharp Minor tune on alto saxophone redolent with past nastalgia. The second, in its dreamy, ghostly waltz, might represent life in the present, while the third, utilizing a theme developed from the composer’s earlier religious music, could be taken to represent a last-judgment grappling with death (the Dies Irae) and salvation.

This last work of Rachmaninov shows him at top form as an orchestrator and offers orchestra members as many opportunities to shine as there are golden domes now in the composer’s homeland. The Symphony players excelled in nearly all of them (the saxaphone soloist was a little harsh in a couple of spots). For his part, Denève took the music slightly on the slow side and was able, with judicious dynamic control and rhythmic flexibilty, to shed light on many niceties of orchestration. Only in the last movement did the slower approach detract. It is in this movement that Rachmaninov overextends some lesser-grade filler passages. Getting past them with dispatch enables more attention on the real beauties of the finale. Among them is the fortissimo tutti of the Dies Irae, which Denève handled in supreme manner.

While not the very last utterance of the Dances, Death’s was the loudest, a Totentanz that reminded everyone, along with the themes of the earlier concert selections, how precious is our limited appearance on the footboards of life.