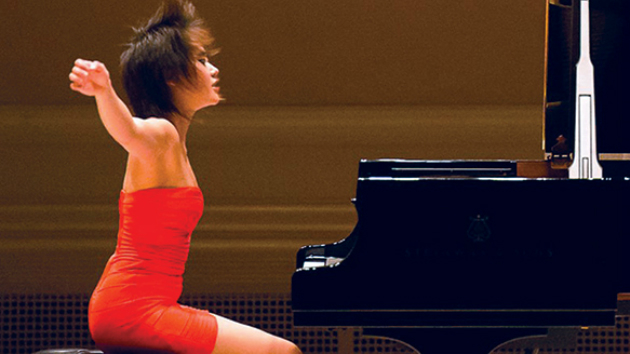 Yuja Wang turned Davies Hall into her own deluxe dice cup Sunday night, shook it hard, and let the numbers fall where they would. It will surprise no one who has ever heard this stunningly gifted pianist that she cleaned up and left everyone at the bar gaping at her game. But on this particular night, the always combustive Wang had more surprises than usual in store.

The first came before a note had been played, with her offstage announcement that the order of pieces printed in the program would not be followed. That was an understatement, with most of the composers originally slated for the second half of the bill moved forward to the first and others regrouped. The inspiration of casting off with Ravel’s Une barque sur l’océan (A boat on the ocean), from Miroirs, was confirmed in the transparent liquidity, the surges and retreats, and dramatic tidal pull Wang conveyed through every measure. 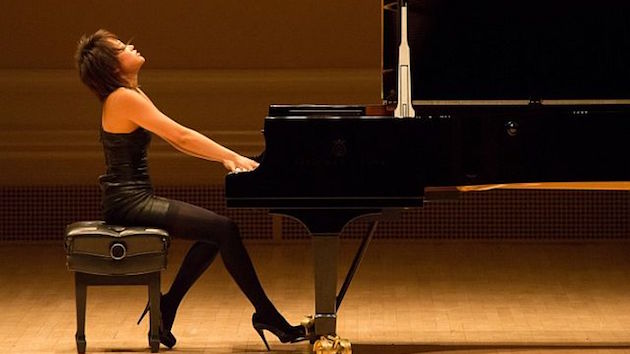 Technique both dazzles and disappears in this artist’s hands. The mists of mingled chords and sudden lucidity in the separation of the left- and right-hand subjects served a clear-eyed purpose. Wang took the audience out into the deep of Ravel’s ocean-going journey with phrasing now lulling, now insistent, now shimmering. The dynamic shifts were supple and fresh. It was a marvel of immersive but always discriminating pianism.

One of two Scriabin sonatas (No. 4) came next, opening in a musing haze that gave way to rhythmic outbursts, pulsing chords, and a near maniacal climax. Federico Mompou’s poignant and pellucid miniature Secreto, from that Catalan composer’s Impresiones intimas (Intimate expressions), calmed the storm with its quietly ascendant open intervals in the bass and a tender melodic meander floating above.

A closer juxtaposition came in the burbling, pristinely ornamented C-major Andante by Baldassare Galuppi followed by Bach’s expansive Toccata in C Minor. Wang, best if perhaps reductively known for her 20th-century fireworks, proved her Baroque bona fides and then some in the Bach. Exquisitely voiced, the Toccata unrolled in a seamless stream of absorbing episodes, fast and grandly slow, fugal and rooted in eloquent counterpoint. The rhythms pulsed and breathed with a sense of forward momentum and inevitability. It was as if Wang had entered the mind of Bach and read every intention, inhabited every ripple and fold of his genius.

The recital had reached its lofty midpoint. Discoveries both musical and mechanical were still to come.

After opening the second half of the reconfigured program with a trio of Chopin Mazurkas, Wang, who had changed from the hip-hugging, pale-yellow gown she wore before intermission to another floor-length stunner in spangly silver, retreated from the stage for an uncomfortably long interval. Word finally came over the PA system that the performer had requested some adjustments to the Steinway. Out came a technician with his tools to recalibrate.

Then, as if to get them entered into the record correctly, Wang replayed the Mazurkas. On both first and second go, the Chopin dances were not a high point of the evening. While there were plenty of suave and sensitive passages, a certain harshness, an over-selling of contrasts crept in. The Brahms Intermezzos, somber bordering on mournful, made a muted but effectively lingering impression.

A pensive, inquisitive reading of Berg’s Sonata Op. 1 came off as an unlikely but instructive spiritual cousin to the Brahms. Scriabin’s Sonata No. 5 was full of sound and fury, signifying plenty.

When Wang indicated encores would be in store, a ripple of anticipation passed through the large Davies Hall crowd. The pianist answered back with a ripple of her own, in the arpeggiated treadle of the Schubert/Liszt “Gretchen at the Spinning Wheel.” Two finger-bending spectaculars followed that gorgeously shaped, handsome proportioned table-setter. In powering through the Bizet/Horowitz Carmen Variations and Prokofiev’s Toccata, with its obsessive flurry of repeated notes and hammered chords, Wang gave the thrill-seekers a flashy sendoff.

The more sustaining takeaway, for this listener at least, had already been inscribed, in the performer’s moody Brahms, her mercurial Ravel, and that sublimely magisterial Bach Toccata.