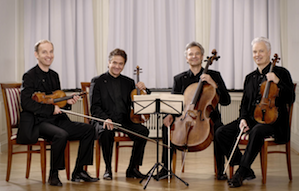 The work is in seven movements, disparate in length and in mood. Here it was played with hardly any breaks, as if it were a single gigantic movement, one of a fairly constant temper. It was serious and brow-furrowing — everything that fits the popular image of late Beethoven. There were some moments of solemn humor, yet these were more to be heard in the slow Andante fourth movement than in the scherzo, which comes fifth, or in the finale. Those are the movements that are supposed to be light and witty. Here, the finale in particular was jagged and tough, in the mode of the Grosse Fuge.

Perhaps this shouldn’t be too surprising from a German quartet, given the German reputation for artistic solemnity. (Three of the Auryn Quartet players are German; violist Stewart Eaton, though English, also lives in Germany.)

Not all is quite that grim in the Quartet’s musical world, though. Theirs was an all-Beethoven concert, the fourth of six that the SJCMS is holding over a three-year period to cover all of that composer’s quartets. The Auryn was originally scheduled to play all six, though an illness last year forced the ceding of the first two concerts in the series to the Escher Quartet. The Auryn is already scheduled to reappear next February to complete the series. Sunday’s concert, typically for an entry in a Beethoven cycle, offered an early and a middle quartet, along with the late-period Op. 131.

The Auryn Quartet, however, doesn’t believe in the traditional tripartite division of Beethoven’s music — or at least it doesn’t play as if it does. Op. 18, No. 2, in G, the least weighty of all Beethoven quartets, was here lively yet serious rather than lighthearted. It passed from courtly in the exposition of the first movement to vehement in the development.

Op. 18, No. 2, in G, the least weighty of all Beethoven quartets, was here lively yet serious rather than lighthearted.

What kept it from being grim was a joyousness in the music-making, visible — as well as audible — in this work in cellist Andreas Arndt’s head nods and smiles. He was clearly enjoying himself, as was the audience. Except in solos, which burst out with often-startling aggressiveness (Eaton, too, is an aggressive soloist), Arndt kept his cello inconspicuous, though it was vital at maintaining the even and consistently maintained pulse of the music, which is the Auryn Quartet’s most impressive quality.

The “Harp” Quartet in E-flat, Op. 74, is also usually treated as a relatively light and ethereal quartet. The Auryn put into it all the vehemence expected of a middle-period Beethoven work. It carried, however, more diversity than its companions. The scherzo began with a slashing opening, gradually cooling down in energy. This merged into a mostly sedate fourth movement with a quiet ending.

Maintaining the even and consistently maintained pulse of the music is the Auryn Quartet’s most impressive quality.

Some of the more interesting sounds of the concert came in this work. A diversity of plucking styles enlivened the pizzicato passage in the first movement that gives the piece its name. In a violin duet in the slow movement, first violinist Matthias Lingenfelder had a darker tone than the light sound of second violinist Jens Oppermann. This was most unusual. Elsewhere, the two violinists played more typically for their parts. Lingenfelder generally kept to a strong, mildly sweet tone most suitable for his leading role.

The general seriousness of the Auryn Quartet was also reflected in its choice of an encore. Instead of playing a lively barnburner, the players serenaded their audience with the quiet, lyrical Andante cantabile from Haydn’s “Lark” Quartet in D, Op. 64, No. 5.