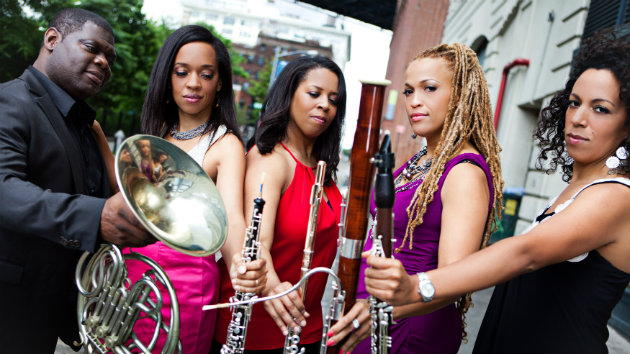 The Imani Winds, a quintet from New York City, brought a bright and brash program to its San Jose Chamber Music Society concert at the Trianon Theatre on Friday, Nov. 15. It also brought along the renowned pianist Jon Nakamatsu to help out.

Nakamatsu made his contribution in Mozart’s Quintet for Piano and Winds, K. 452. The ensemble with piano added is still only a quintet because Mozart notoriously disliked the flute and left it out. The presence of oboe, clarinet, French horn, and bassoon still left plenty of air blowing through pipes, combining with the piano for a sound quality rare in pre-20th-century chamber music.

Mozart considered this quintet to be one of his finest compositions and greatest challenges as a composer. He considered writing for a wind ensemble of single instruments to be a more difficult proposition than for pairs of winds or for strings. Strings are all larger or smaller versions of essentially the same instrument, but different wind instruments are all strikingly distinct in construction, in timbre, in the types of lines they’re designed to play.

Mozart met the challenge of putting these different instruments together by keeping tuttis to a minimum. The winds trade off imitative passages, while the piano plays most of the continuous lines and holds the work together.

With such writing, building a fluidly melodic, ideally Mozartean performance can be a demanding test: These performers passed it. Behind Nakamatsu’s graceful pianism – further spotlighted afterwards in a rhapsodic solo performance of two Schubert impromptus – the winds built an attractive structure with the feel of Mozart’s Gran Partita Serenade, a work built on matching pairs of winds. After 18 years together, these performers know how to work as a unit.

Behind Nakamatsu’s graceful pianism, the winds built an attractive structure with the feel of Mozart’s Gran Partita Serenade.Carl Nielsen took a different approach in his Wind Quintet, Op. 43, of 1922. He mixed neoclassical restraint and formal symmetry with an abandonment of Mozartean tonal balance. He figured that since the wind instruments all sound like individuals, he should let them rip. There are perfectly blended five-part chorales in this work, yet most of it – particularly in the variations of the last movement – showcases solos, or pairs or threes of instruments striking off each other or even audibly arguing. It was charming and even a little wild.

The wildness increased in the assorted works that made up the rest of the program. In Imani flutist Valerie Coleman’s Red Clay and Mississippi Delta, Astor Piazzolla’s Fuga y Misterio, and a pair of klezmer dances arranged by Gene Kavadio, plenty of wild solos for Mariam Adam’s strong and silky clarinet were matched by equally supple passages for Coleman’s flute and Toyin Spellman-Diaz’ oboe.

Meanwhile, Jeff Scott – anything but a smooth or glossy French hornist – was blasting clarion calls around the tiny auditorium, while Monica Ellis punched giant holes in the bass line with her bassoon. Even more than their colleagues, they reveled in the freedom and energy of these informal pieces. When they played staccato notes as a pair, the sound resembled a trumpet. Put all together, the five instruments emitted lunges and squeals and whoops with joyful glee.

The proof of this attitude came in the program’s most audacious work, a 20-minute cut-down edition of Rimsky-Korsakov’s Scheherazade, arranged for the Imani Winds by Jonathan Russell (who has also produced a similar version of Stravinsky’s Le sacre du printemps). It’s an imaginative arrangement, passing Rimsky’s solo violin line around the ensemble and not just giving it to the obvious flute.

The performance was as unfettered as the arrangement. Freed from the formal necessity of staying together in a large orchestra and the lushness of its sound, the wind players dropped any sense of exotic suavity from the music and replaced it with guts and gumption. This was Scheherazade knocking the Sultan sideways with the vividness of her storytelling, and that’s how the Imani Winds struck the audience.