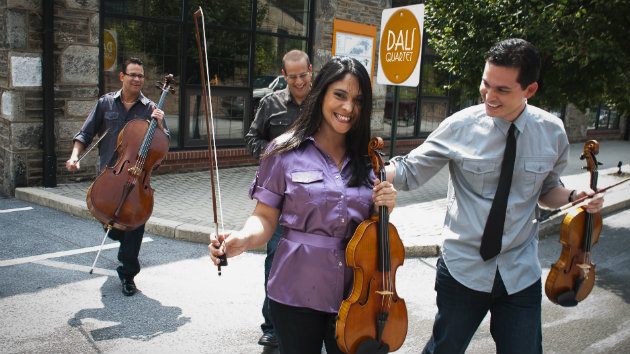 The San Jose Chamber Music Society gave a mostly Latin American concert by mostly Latin American musicians to begin its season on Sunday, Oct. 25. The Trianon Theatre was host to the Dalí Quartet, resident in Philadelphia and comprised of two Venezuelan players, one Puerto Rican, and one French. They were joined in some pieces by Ricardo Morales, principal clarinetist for the Philadelphia Orchestra and the brother of the quartet’s Puerto Rican cellist, Jesús.

The highlight of the concert was the quintessentially Latin American part, a sequence of five short, slinky dance pieces by composers perhaps not well-known up north. Each piece was livelier and more uninhibited than the last, as the quartet sunk deeper and with obviously greater pleasure into its dance-band persona, with instruments turned on their sides and strummed like guitars and ratchet percussion imitated by bowing below the bridge. Second violinist Carlos Rubio had a particular knack for getting the perfect harsh sound out of the ends of his strings.  With Preludio y Merengue by the contemporary Cuban Paquito D’Rivera, for which Ricardo Morales joined the quartet, the playing started getting really unabashed.

The snappy, shifting rhythms of Angelica by Efraín Amaya, a contemporary Venezuelan composer, came first. This was to my taste the finest composition of the group. The set continued with El día que me quieras, an arrangement of a sultry song by the Argentine tango master Carlos Gardel, then on to the elegant and graceful 1930s Cuban Danzón Almendra by Abelardito Valdes. With Preludio y Merengue by the contemporary Cuban Paquito D’Rivera, for which Ricardo Morales joined the quartet, the playing started getting really unabashed. It peaked with the encore, a brief version of La cumparsita by Gerardo Matos Rodríguez of Uruguay. This piece is much better-known than its title: If a listener knows only one tango melody, this will be the one.

Between the Amaya and Gardel works, the quartet played the String Quartet No. 1 by the great Brazilian composer Heitor Villa-Lobos. This title might imply a detour into serious academism, but that’s not what Villa-Lobos is offering. In its revised version from 1946, late enough in the composer’s career to belie its early numbering, the quartet is a suite of six brief dance movements, alternately slow and fast. Each has its own character, and in this performance they came off as variously sweet and warm, jaunty and metallic, soulful, airy, humid, and earnestly Bachian. Villa-Lobos was devoted to Bach, so that resemblance should not be a surprise, though it’s a little incongruous in a movement titled “Saltando como um Saci,” which is variously translated as “Jumping like an imp” or “like a jumping bean.”

Villa-Lobos is conscientious about spreading his solos around, giving plenty of melodic leads to the deep, rich viola of Adriana Linares and the crisp, vigorous cello of Jesús Morales.

The Dalí Quartet showed more of its earnest side in the European half of the program. La oración del torero, written in 1925 by the Spanish composer Joaquín Turina, is a reflective piece that carries some bursting into rhythm, but was played here in a dark, muted style emphasizing the composer’s French training. First violinist Guillaume Combet gave striking variation of expression in his solos.

The quartet’s principal pairing with Ricardo Morales was for Mozart’s Quintet for Clarinet and Strings in A Major, K. 581. This was played in a delicate manner by the strings, with a high, slightly shrill sound, building subtle tension in pauses between the phrases. The awesome natural flexibility of Ricardo Morales’ clarinet, running through scales without the slightest break, outshone the string players’ fluidity here by a considerable margin, great though their talents are. They sounded much more at home in Latin America.