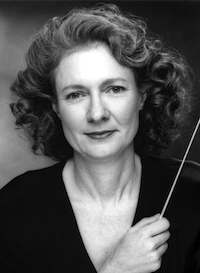 Until I arrived at the San José Chamber Orchestra’s Sunday concert at Le Petit Trianon, I had not realized how intense a tribute to the late Lou Harrison the program was to be, nor how deep were the connections to nearby San José State University, where Harrison taught. Besides a work of Harrison’s own, the concert featured memorial elegies to him by two composers who were Harrison’s associates at the university, plus an additional piece that has no direct connection to Harrison that I am aware of, which nevertheless fitted seamlessly into the same ethos. Many of the performers, also — conductor Barbara Day Turner and piano soloist Gwendolyn Mok among them — have taught or studied in the university’s music department, which co-sponsored the concert.

Harrison (1917-2003) is perhaps the quintessential Northern California composer. His style of contemplative meditation that doesn’t entirely conceal a hard, even caustic backbone; his technical obsession with scales, temperament, and intonation; and his trans-Pacific interest in mixing Western classical music with East Asian traditions, especially the Javanese gamelan, are all characteristic of our local compositional culture. He was prominent in making them so. He lived in these parts, latterly in Aptos, for much of his life.

Harrison’s catalog of compositions can be bafflingly complex. He wrote several works with titles similar to that of Sunday’s offering, Suite for Violin with String Orchestra. This one turns out to be the Suite for Violin and American Gamelan, composed in 1974 in collaboration with Richard Dee — a San José State faculty colleague and a scholar of Asian music — as transcribed by Harrison’s student Kerry Lewis in 1977 for the more easily available string orchestra, the American gamelan being a specific set of instruments that Harrison designed.

In either form, the suite is a long, rambling work of seven movements, some slow and melodic, others rough dances, all named for and evoking venerable Western or Eastern musical forms, from the dithyramb to the chaconne. One movement is for orchestra alone. The rest of the time, soloist Cynthia Baehr, SJCO’s regular concertmaster (off that duty for this concert) played almost constantly, carrying nearly the entire flow of the music. She played tirelessly in a dry, heavy tone, with extended double-stops and drones, appropriately for the casually wandering, often modal, ancient-sounding melodic line.

In a few places the orchestral violins and violas joined in with Baehr. Mostly the orchestra served for rhythm, punctuation, and held chords. Despite the title, this was not just default strings. Besides a prominent part for harp, often used to add a crisp attack to string chords, a piano and a celesta lurked percussively deep in the background. Especially at the end, where the keyboards spiced up large grand chords, the sonic resemblance to at least the spirit of the gamelan was pervasive. Bow tapping and knuckle rapping on the sides of the cellos and basses, heroically rendered by players fearless of their instruments, also kept the gamelan style going.

Lewis has not disappeared since making this transcription. As a composer on his own, he was on the program for an Elegy for Lou Harrison, commissioned by the SJCO in 2005 and returned by popular demand as one of the winners of the orchestra’s “encore contest.” Written in a deliberate echo of Harrison’s style, it began in a slightly dissonant anguish of grief — more astringent than anything in the Suite for Violin, though not as harsh as Harrison could get — and passed through a slow melodic section before concluding with a gently primitive modal dance, all entirely as Harrison would have done it himself.

This was a concert, then, where all the works reinforced each other ... the result was enriching rather than repetitive.

EKTA II by Brent Heisinger, another faculty colleague of Harrison’s, was commissioned by the orchestra and received its first performance here. It’s something of a piano concerto, and something just as much of a percussion concerto, requiring four performers to handle its battery mostly of mallet instruments — blocks, chimes, tapped cymbals, and the tam-tam whose rumble softly began the work among them. The guest players were a quartet of local percussion all-stars: Anthony J. Cirone, Galen Lemmon, Patricia Niemi, and Mark Veregge, of whom all but Niemi have been at San José State.

Heisinger, too, is in the Harrison tradition, though he makes more of a blended fruit smoothie out of his intercontinental influences. In this case, Western classical is mixed with Chinese — and, in the homage to Harrison that closes the work, a bit of gamelan. (The first EKTA, also an SJCO commission several years ago, used musical material from India.) Like Harrison’s suite, it’s a succession of movements of alternating relaxed and lively temperament, in this case blended together without pause. Its focus jumped abruptly from the strings, energetically introducing melodic and rhythmic material, to the piano, then to the percussion, and back again. Both piano and percussion received major unaccompanied solos that, according to the program notes, included improvised material. Whether playing as directed by Heisinger or improvising on her own, Mok’s solos gently blended late-Romantic virtuosity with the smooth harmonies and relaxed attitude of Windham Hill-style jazz.

The concert opened with the brief Pizzicato by Vivian Fung for the string orchestra. The strings were not just plucked, as the title suggests, but snapped, swatted, and snapped off the fingerboard. Tapping and knocking on the bodies of the instruments tied the piece to the Harrison-Dee suite, offsetting a penchant for syncopation, intricate unexpected triplets, and cross-rhythms reflecting Fung’s own choppier and more glittery style.

This was a concert, then, where all the works reinforced each other and sounded rather alike. With the richness and depth that Harrison and all his colleagues brought to their work, the comparative rarity of this type of music at regular symphony concerts, and the crisp dedication that Turner and her musicians brought to all the contributions, the result was enriching rather than repetitive.