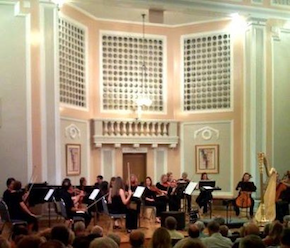 The San José Chamber Orchestra, conducted by Barbara Day Turner, lured a near-capacity audience to Le Petit Trianon in downtown San José for a season-opening concert on Sunday, even though the composers featured were not world-famous names, showing that big headliners are not needed for a popular or successful concert.

Local audiences may know Kerry Lewis and Christopher Pratorius, residents of the area (in Santa Clara and Santa Cruz, respectively), whose works have shown up on local music programs before. And Polish patriots should recognize the name of Grazyna Bacewicz, the mid-20th-century figure often ranked as Poland’s greatest female composer.

All the works on the program were written in a variants of a semi-consonant modern style. None were mind-bogglingly exciting, nor heart-stoppingly beautiful, yet all were ingratiating works of substance. All three works were concertos of a kind, and the two by the living composers were receiving their first performances.

Pratorius’ Claroscuro en flor was the most conventionally structured of the three, with plenty of unaccompanied passages for the soloist, and dialogues with the orchestra, shaped into the traditional three movements.

The solo instrument, however, was a harp — something a bit unusual, though not unprecedented. Anna Maria Mendieta was the harpist. She was fluent and invigorating. Pratorius, himself a guitarist, had her play some guitar-like plucking sounds, along with a lot of needling away at the highest strings of the instrument, some striking bell-like sounds, and some fingernail strumming that sounded less like a guitar and more like an autoharp.

The work as a whole was primarily modal, without taking particularly after any earlier modal composers to my ear. The orchestration, full and occasionally witty, tended towards the shrill as well, and the string players found maintaining intonation more challenging than they did in the other works in the concert.

There was a distinct flavor of American nationalist heartiness, to which Lewis is heir via Harrison from Harrison’s teachers, combined with the entirely fluent non-native Spanish.

Lewis’ La vida es arte is a concerto of a different stripe. It’s in four movements, none of them very slow, all of them running together. Although Pratorius was the composer of Latin American ancestry on this program, Lewis is the one who wrote a Latin American flavored concerto. The effect was as if Lou Harrison, Lewis’ teacher, had looked towards the south instead of across the Pacific for his non-indigenous musical inspirations. There was a distinct flavor of American nationalist heartiness, to which Lewis is heir via Harrison from Harrison’s teachers, combined with the entirely fluent non-native Spanish.

This concerto is for flute, and Teresa Orozco was there as soloist to play many a phrase that darted in and out among the other instruments, with a great deal of pinpoint virtuosity and without much in the way of special sound effects. The soloist did not dominate this concerto as in the other. It was more an obbligato part, or just that of an orchestral participant. Indeed, in many passages the flute was merely the most prominent of five winds offering fragments of solo phrases in turn.

The strings were prominent and played rhythmic figures well, and near-constant percussion also strongly flavored the whole. The result was intriguing to listen to, and it held together impressively well.

The strings, of course, were prominent and played rhythmic figures well, and near-constant percussion also strongly flavored the whole. The result was intriguing to listen to, and it held together impressively well.

The offering by Bacewicz, her Concerto for Strings, dates from 1948. This is a little late for the heyday of a “neoclassical” piece evoking a Baroque concerto grosso, and Bacewicz writes in a somewhat more modernistic style than is typical for neoclassicism. This work puts the sections of the string orchestra in vigorous conversation, with plenty of solo passages for the section principals, violinist Cynthia Baehr, violist Emily Onderdonk, and cellist Michelle Kwon. The idiom resembles what would be offered in similar works by composers like Britten: lots of biting dissonance within a basically tonal context and a securely Baroque academic structure.

Though based in part on folk material, it’s rather tuneless, yet, like both of the other works, it remained friendly and ingratiating.

An encore by the popular Argentine composer Astor Piazzolla offered a chance for both soloists to return to the stage to take a brief bow. This little piece, an arrangement of a tango titled Introducción al Angel, was actually the most pleasurable and assured composition of the evening.