The male and female voices of the Sanford Dole Ensemble chorus, 24 strong, had already made a distinct impression in a Palm Sunday concert at St. Gregory of Nyssa Episcopal Church. Over a groundswell of somber strings in the first section of James MacMillan’s 1993 Seven Last Words From the Cross, the men burst forth with an urgent “Rex Israel.”

Moments later, the women cut through the clamor with a becalmed chant, all the more incisive for its sweetness: “The life that I held dear I delivered into the hands of the unrighteous.” The drama of the crucifixion was emerging in musically palpable ways. 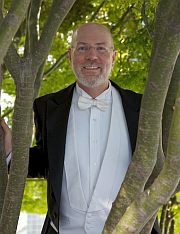 But it wasn’t until the third section of the piece, which juxtaposes Christ’s declaration from St. Luke (“Verily, I say unto thee, today thou shalt be with me in Paradise”) with the Good Friday Versicle Ecce Lignum Crucis (Behold the wood of the cross), that the group’s full resources were tapped. That’s when a sequence of handsomely integrated duets enacted the revelation of the cross. Basses Joshua Henderson and John Bischoff rumbled with grave austerity. Tenors Kevin Gibbs and Mark Mueller deftly offered their more cursive phrases, as the cross came into view. In a lovely intertwining, altos Lynda Higson and Heidi Waterman made the revelation of the cross complete. Through it all, violin soloist Joseph Edelberg stitched a plangently singing melody.

While that may have been the peak of the Dole Ensemble’s “Last Words: Modern Music of Remembrance” program, the two-hour concert certainly occasioned other causes for reflection and rejoicing. A well-chosen list of compositions, which included Arvo Pärt’s meditative Berliner Messe (1991, revised in 2002) and Tarik O’Regan’s taut yet expansive Triptych (2004-05), made a clear and convincing case for the amplitude of contemporary sacred music.

Pärt’s Mass, with its long lines and open intervals, enhanced the sense of soaring space in St. Gregory’s octagonal dome. O’Regan’s work, which combines texts from such diverse sources as the Bible, William Blake, Muhammad Rajab Al-Bayoumi, John Milton, Rumi’s 13th-century Persian masterpiece Masnavi I Ma’navi, and others, encouraged listeners to think in cosmically connective terms. What better setting for that than this singular church in San Francisco’s Potrero Hill district, where visitors can pick out, among the wall-filling paintings of giant dancing saints, Blake himself, and Rumi, plus Teresa of Avila, Ella Fitzgerald, Thomas Merton, Lady Godiva, and Eleanor Roosevelt?

Words to Believe By

MacMillan, a Scotsman whose resume includes commissioned concertos for cellist Mstislav Rostropovich and percussionist Evelyn Glennie, as well as a St. John Passion, provided the main attraction of the afternoon. The composer spares nothing to energize the text. Mighty choral blocks of sound are poised above low instrumental groaning in “Woman, Behold thy Son!” The fifth Word, “I thirst,” is set to a parched single note. Stravinskylike pulses desperately animate “It is finished.” The piece closes, daringly (and misguidedly), with a withering phrase for solo violin.

With the eponymous Dole on the podium, the musicians repeatedly rose to the challenges of this demanding piece. Quiet lamentations and sturdy exclamations alike were decisively voiced. The string orchestra had some noble and stirring passages. But there were also miscues. Some entrances were either muffed or slightly askew. The string sound grew patchy; intonation wavered at times. Yet the line of tension, the spiritual arc of the piece, was admirably, stirringly maintained. Dole and his musicians made a listener’s first encounter with this vivid piece absorbing.

With its broad, clear contours, Pärt’s Mass afforded a welcome change of temperament after intermission. Despite a long and detailed text, especially in the Credo, the settings’ details seemed less important than the larger musical shapes. The Gloria unfolded over a fragmented ostinato. In a yearning Veni Sancte Spiritus, the strings offered more sustained support. The Credo’s affirmation, by turns halting and assertive, was a persuasively human depiction of how belief waxes and wanes. The chorus sang solidly throughout.

The cunningly constructed Triptych proved to be an ideal finisher, at once intense and buoyant. The opening “Threnody” favored deftly interlocking lines over mournfulness. “As We Remember Them,” pulling away from and then longing for a tonic center, featured soprano Helene Zindarsian’s appealing voice. And then the mystic Rumi issued the most memorable words, with the chorus’ full conviction: “Why then should I be afraid?” they bravely sang. “I shall die once again to rise an angel blest.”