The Mozart Requiem includes four intermittent vocal soloists, but the real star is the choir, which is featured in almost every movement. That stardom shone bright at the Santa Rosa Symphony’s memorable Requiem performance on Monday night, Dec. 9. The soloists were good, but the choir — Sonoma State University Symphonic Chorus — was superb. Located within the orchestra instead of in the choir loft, the choristers were fully integrated into the sonic texture, aided in no small part by their excellent diction and well-controlled dynamics.

Instead of the standard Sussmayer version of Mozart’s unfinished masterpiece, maestro Francesco Lecce-Chong chose a contemporary version by musicologist Robert Levin. The differences are mostly subtle, but Levin adds a fully embellished “Amen” fugue at the end of the “Lacrimosa” section and tinkers with the “Sanctus.” The tinkering works, but the new fugue sounds more Baroque than Mozartean.

Those quibbles aside, the performance was nearly transcendent, displaying Mozart’s genius and humanity at its most profound. Conducting without a score, Lecce-Chong displayed complete command of every measure, eliciting a crisp sound from the orchestra and expressive singing from the choir. The articulation from both players and singers was knife-edged, with every note and syllable distinct. The tempos were brisk and steady.

Standout moments included the “Dies Irae,” which took off like a rocket. The choir’s eyes were glued to Lecce-Chong rather than buried in their scores, and they reacted swiftly to his graceful cues. The subsequent “Tuba Mirum” moved at a similarly brisk pace and featured strong solos from bass Philip Skinner and trombonist Amy Bowers. The vocal quartet in the “Recordare” was fine, but the top three singers’ limits became evident over the course of the movement. Soprano Shawnette Sulker had too much vibrato and seemed preoccupied with her score; alto Laura Krumm had good tone but was drowned out; tenor Benjamin Brecher had a sweet sound, but his voice was often constricted. As in the “Tuba Mirum,” bass Philip Skinner proved the most consistent.

Lecce-Chong took a long pause at the end of the new “Amen” section, perhaps to gather his forces for the majestic “Domine Jesu” and “Hostias,” which really cooked. Everyone on stage was swept up by the conductor’s relentless energy, as each gorgeous phrase flowed into the next. The momentum carried into the “Sanctus,” whose “Hosanna in excelsis” lines were downright rollicking. In the “Agnus Dei,” the choir showed off its precise articulation, enunciating “qui tollis peccata mundi” with clarion fervor. The final words of the Requiem — “et lux perpetua luceat eis” (let everlasting light shine upon them) — lived up to their double meaning, referring not only to the light of heaven, but also to Mozart’s eternal genius. 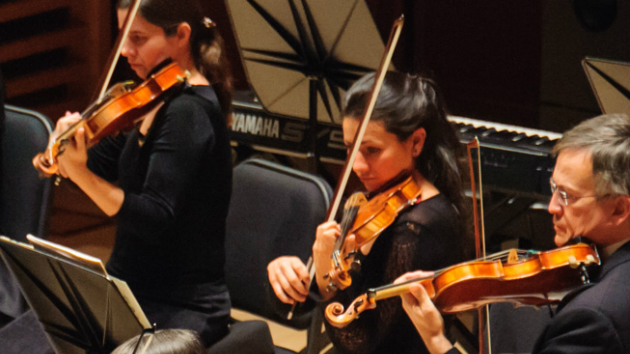 Genius of another kind inhabited the first half of the concert, which opened with a sparkling performance of Haydn’s Symphony No. 39. Lecce-Chong conducted the reduced ensemble (strings, four horns, two oboes, and bassoon) while standing before an elevated fortepiano, on which he interpolated occasional unscored continuo parts. The fortepiano was mostly inaudible, but it did rise to the occasion when the strings played pianissimo.

Haydn’s symphony is a real gem, as deserving of respect as his later efforts. The orchestra opens very quietly, with pregnant, jokey rests between phrases. Despite the quietude, the ensemble bristled with energy that carried over into the later, louder sections. The Andante second movement was spare, elegant and courtly, with bows in perfect sync. A unified, reverberant sound from the strings dominated the Minuet and continued in the dramatic Allegro di molto finale, where the players spun off a series of exemplary runs at a furious pace.

Furious pacing was nowhere in evidence in the next work, Records from a Vanishing City, by contemporary composer Jessie Montgomery. In his introduction, Lecce-Chong said the piece “creates a sense of place” by recreating the “white noise” the composer heard while growing up in the lower east side of Manhattan. Lecce-Chong’s description turned out to be accurate, but unfortunately the piece never went beyond atmospherics.

Montgomery is clearly skilled at orchestration, and the density of her sound is remarkable. Nonetheless, her basic modus operandi is to place solos atop a constantly shifting cloud of sound. The results were often beautiful, but the piece never went anywhere, and development was hard to detect.