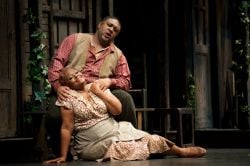 Porgy and Bess is surely an opera, beyond a musical, when all the performing stars are aligned. The Seattle Opera production, heard Friday (closed on Saturday), had almost all the opera elements, a powerful cast, strong production and direction, but not a musically energized conductor. Four women led the way. Their vocalism, their depth of feeling, and the resultant dramatic intensity separated this Porgy as opera from the musical.

The conductor, John DeMain, just didn’t get it or have it. He didn’t work with the music, he played it, presiding over a fine, well-rehearsed orchestra as it cruised through the score. Sure, he managed the coordination with the stage and led the singers well. But that’s hardly enough. The clarity and crispness of the Gershwin rhythms weren’t there; the score was flaccid, no bite. Certainly there was no extra urging to the climaxes. And with a score of such general familiarity, interpretive engagement is essential. Take, as an example, the aria that’s perhaps the most poignant in the work, Serena’s “My Man’s Gone Now.” It’s powered by a crushing stress on the second beats, but DeMain just didn’t produce that, didn’t hear it.

Mary Elizabeth Williams stood as the community’s moral conscience and leader.The singer did, the statuesque Mary Elizabeth Williams, who commanded her scenes with a potent, full, excellent voice to match her presence. She fired the drama at the funeral for Serena’s husband Robbins (the strong and forceful Michael Austin); one ululation in particular was hair-raising. She stood as the community’s moral conscience and leader, such as during the picnic and hurricane scenes, all of that more so than any Serena I’ve heard as far back as the splendid Ruby Elzy in the first production, 1935. 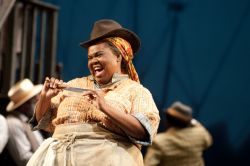 Lisa Daltirus, a grand spinto soprano, was as incandescent as the role of Bess must be. She would switch expression and color in the voice instantly, setting the volatility of Bess. The director, Chris Alexander, developed this, as in her tremulous responses to Sportin’ Life whenever he thrust packets of cocaine at her. Daltirus’ build did impair her movement, which was often awkward, as during Crown’s overcoming Bess at the close of Act 2. The duet before it, though, was stirring. Michael Redding sang in a firm, imposing baritone and cut a virile figure of the fatally violent and evil Crown.

Gordon Hawkins was a good Porgy, but not more. He was fairly static and his modest range of expression surprised in view of the might in his leonine baritone and the memories of his strong Alberich in the San Francisco Opera’s Ring. Whether it was the director’s or Hawkins’ decision, his standing upright, dependent on a single crutch and dragging one leg, went against the tradition of Porgy’s having to push himself along on a wheeled platform (originally a goat cart). A blunder. Porgy must be really a “cripple” as a beggar — physically vulnerable, not simply handicapped.

No Role a Small One 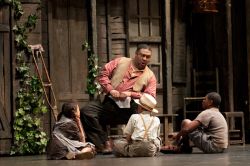 There were no minor roles in this cast; the comprimarios were that good. The Maria was outstanding: Gwendolyn Brown, as the Big Mama of Catfish Row, funny as she threw the importuning Sportin’ Life around the stage. Jermaine Smith built that personage on the slinky moves of John W. Bubbles and Cab Calloway with much snakiness of his own. He did an original number on “It Ain’t Necessarily So,” very effective. The “Summertime” at the opening of the opera was beautifully sung by the young and very attractive Angel Blue, singing Clara.

Trained by Beth Kirchhoff, the chorus had an excellent big sound and ensemble, singing splendidly except for soft articulation, which shorted the attacks in dramatic pieces like “Gone, gone, gone.” But that was consistent with DeMain’s soft beat. The choreography was attractive and, except for some dispensable, distracting gymnastic turns, kept light and true to the style and, I would think, the culture.

The set was pleasing, traditional, showing Catfish Row with dwellings in two-storied buildings on each side, gates across the middle, Porgy’s house down stage right. An unimportant episode involving two lawyers at the beginning of Act 2 was omitted, but otherwise the production was true to the original. More important, the singers made it true to real opera.