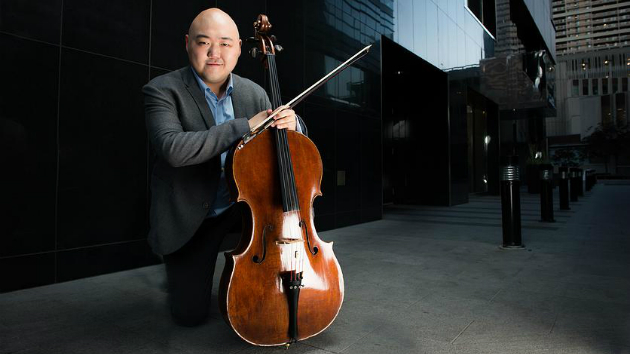 Thursday’s Silicon Valley Musical Festival program with cellist Arnold Choi, the second of a series of four, stood out because of its repertoire. This year’s festival schedule is arranged like a jigsaw puzzle: one solo violin recital, one for solo cello, one for flute and harpsichord, and finally a group concert by an assemblage of all four performers plus an oboist.

All the programs are being held at a new venue, The GlassHouse in downtown San Jose. This turns out to be the recently renovated lobby atrium of a glass-walled, Bauhaus-style office building on Market Street. The acoustics are cavernous and echoing, though the area is small enough that this didn’t become a problem for the hearers. The glass walls are soundproof against the ordinary traffic of the busy intersection outside, just not thick enough to keep out motorcycle roars or emergency vehicle sirens.

Choi played three unaccompanied works on his 1696 Stradivarius cello. One of them, of course, had to be by J.S. Bach. Choi approached the Suite No. 3 in C Major with grandeur and rolling multiple stops. His tone was deep and well-grounded, his fingering solid rather than flashy. His phrasing was based on the harmonic flow of the composition with an emphasis on cadences. As Bach’s melodies in this work are products of his harmony, this brought the melodic beauty of the work strongly to the fore, which made for a pleasing as well as affecting performance. Each of the six movements was distinct in its rhythm and pacing, from slow to courtly to dance-like.

Unusually but appropriately, this was paired with a work for unaccompanied cello by Max Reger —  his Suite in G Major, Op. 131c, No. 1. Reger’s music used to turn up on LPs frequently, but he’s rarely heard in concert. A German composer of the generation of Schoenberg, Reger looked backwards and liked to evoke 18th-century music in a heavier, late-Romantic style. The work sits less easily on the fingers than does Bach, or at least it sat less easily on Choi’s fingers. Some of the playing seemed uncomfortable or slightly off.

Reger’s Suite is a remarkable pastiche. It’s in three Baroque-titled movements – a prelude, adagio, and fugue – and parts could almost be mistaken for a work 200 years older. Other parts use harmonies and technical styles not of Bach’s time. The work sits less easily on the fingers than does Bach, or at least it sat less easily on Choi’s fingers. Some of the playing seemed uncomfortable or slightly off. Generally, though, it was interesting and fairly earnest.

Reger was followed by the Sonata for Solo Cello by George Crumb. This 1955 work came early in the career of this noted experimentalist American composer. It’s more conventionally modernist than his later work, consisting largely of impassioned chromatic phrases, though the light, tentative, emotionally hesitant touch of the pizzicato sections in the opening gave a hint of his developing style. It also gave a hint of the Baroque, curiously enough, as did movement titles of Fantasia and Toccata.

The fourth work on the program paired Choi with flutist Ray Furuta, the festival’s founder and artistic director, in music by Heitor Villa-Lobos. Though Villa-Lobos worshipped Bach, his Assobio a jato (The Jet Whistle) is not a particularly Bachian composition. The title comes from a series of hissing glissandos the flutist plays quickly at the very end. In this performance, the strong and attractive melodic approach of both players stood out. Choi’s most outstanding playing, however, came in his energetically chugging accompaniment to Furuta.

I suspect that the GlassHouse’s acoustics are best suited to solo concerts like this, or for mixes of strongly contrasting instruments, like cello and flute. Still, it’ll be interesting to try out different kinds of programs here and listen to how well they work.