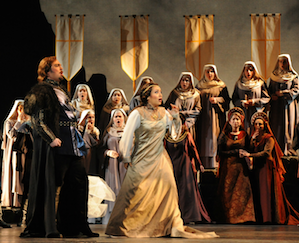 Sometimes in opera, intermission is everybody’s best friend. Opera San José’s new production of Il trovatore is an intriguing case in point. At Saturday’s opening, the production simmered along through most of the first half. But it wasn’t until after intermission that the performance really caught fire.

Fire, of course, is a central motif in Verdi’s thrilling and vengeful 1853 melodrama set during the 15th-century Spanish civil war. Everything in the story can be traced back to the flames — and the moment when the Gypsy woman Azucena mistook her own baby for her enemy’s and threw it into the fire. Azucena also saw her mother consigned to the flames, supposedly for bewitching the younger brother of the Count di Luna. Sworn to avenge her mother’s death, Azucena went on to raise the title character, the troubadour Manrico, as her own. Manrico is the actual brother of the younger Luna — the son of the old count — although neither man knows this. And they both love the young and beautiful Leonora, which makes them sworn enemies.

That’s just the back story. What happens thereafter takes the opera to its logical, bloody conclusion. Adapted from the play El trovador by Antonio Garcia Gutierrez, it’s the stuff of great Verdian drama. But what really matters in Trovatore is the singing, and in the first of two alternating casts, the singers were reasonably strong. Still, at least before intermission, things were hit and miss. No one seemed fully committed; Music Director David Rohrbach had trouble coordinating between the stage and the pit, and director Brad Dalton’s staging didn’t always represent the best in inspired dramaturgy. 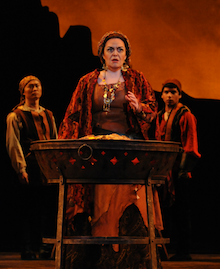 There were flashes of heat in the first half — as Leonora, Cecilia Violetta Lopez impressed with her first aria, “Tacea la notte placida,” her well-placed soprano sounding poised and velvety, with secure high notes all the way to the top of her range. She didn’t sound quite as free in the cabaletta, “Di tale amor,” but the voice was still attractive.

After intermission, the singers returned on solid footing. Birkland, shading her voice into an instrument of dark, focused fury, made her scene in the Gypsy camp riveting. Boyer and Lopez, sounding ardent and tender, blended well in their scene in Castellor, and Boyer went on to give a fine account of the great tenor aria “Di quella pira.” Suddenly, this was a Trovatore of apt intensity. Lopez made “D’amor sull’ali rosee” a shapely, radiant episode, Birkland infused “Ai nostri monti” with tenderness, and Altman rose to the occasion in the opera’s murderous finale. 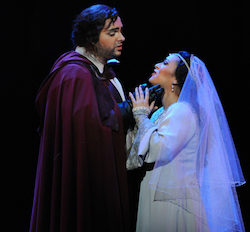 Among the supporting cast, Silas Elash was a robust Ferrando and Michael Jankosky was an articulate Ruiz. Tori Grayum was an appealing Ines. The chorus sang with zeal as gypsies, nuns and soldiers. (In performances on Feb. 16, 19, and 24, principal roles will be sung by Melody King (Leonora), James Callon (Manrico), Evan Brummel (Luna) and Rebecca Krouner (Azucena).

The production is serviceable, with Steven C. Kemp’s sets featuring heavy stone walls, cavernous interiors, and heads on spikes. David Lee Cuthbert’s lighting bathes the proceedings in gloom. Elizabeth Poindexter dresses the men in leather and the women in flowing gowns, and Dalton ’s staging includes a brief torture scene. All well and good, but the Act 1 fire resembles a glowing bassinet. And Dalton overdramatizes the Act 2 finale; doesn’t Verdi suggest that Manrico be led offstage to the execution?

If Rohrbach’s conducting occasionally lacked Italianate flair — a greater sense of urgency would have been welcome — he was always sympathetic to the singers, and the music eventually achieved a dynamic flow. As the first Verdi performance of the company’s 30th anniversary season — and one of the Bay Area’s first tributes to the Verdi centennial — this Trovatore wasn’t one for the ages. But it had its share of rewards.