"Lo, the winter is past ... and the time of the singing of birds is come," says the Song of Songs in the Bible. And lo, the singing of Schola Cantorum San Francisco came to St. Mark's Episcopal Church in Berkeley Saturday night, and yea, verily, the singing was good.
The title of the program was "Come, My Beloved," and the texts were mostly biblical, ranging freely from human love to love between humans and God. One striking aspect of early music, from medieval through Renaissance and Baroque, is that little or no distinction in musical style may be observed between religious and what would now be called secular texts. The same could be said about biblical style and substance. And when you see that half the biblical texts in the program are from the Song of Songs, you know you are in for a treat. 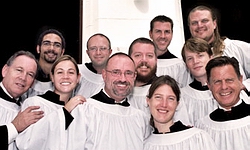 Schola Cantorum combines a perfect blend of voices with ideal musical ensemble. The voices are strong and attractive, and individuals are able to come to the fore for solos and meld right back into a communal sound. The works on the first half of the program were from the Renaissance, except for the opening Ubi Caritas by the 20th-century Maurice Duruflé. The singing started with the 9th-century Latin chant, blossoming into harmony among the men, adding the women's soprano voices, and folding back into the men's voices. The text made the keynote statement of the concert: "Where love and charity are found, God himself is there ... Let us love the living God, and let us love one another ..."

The Renaissance songs, all set to biblical texts (from the Psalms as well as Solomon's Song of Songs), were by Palestrina, Victoria, Lasso, Cipriano de Rore, and Giovanni Maria Nanino. Although they began to sound as if they were all in the same key, each had its own organization and distribution of voices, some more contrapuntal and some less so. Nanino's Diffusa Est Gratia (Grace is poured out), in particular, displayed a distinctive style and took the sopranos higher than the others. Some pieces were in four-part harmony, others in more parts.

The 13 singers are able to take different parts at various times. The altos are male, giving strength to the inner harmony, and the four sopranos sing with a pure tone that blends well with the other parts' sound.
20th-Century Beauties
The second half of the program was devoted to works by 20th-century composers, some of whom are still living into the 21st century. Four texts were from the Song of Songs, and two were attributed to St. Francis of Assisi. Most were sung in English. The composers for full chorus were Gerald Near, Randall Giles, Edward C. Bairstow, William Walton, Healey Willan, Ned Rorem, and Daniel E. Gawthrop.

Choral texture varied from piece to piece. The Giles work moved alternately between chant and homophonic choral singing. The Bairstow and Walton works alternated tenor solos with choral passages, and layered the part singing, by adding and subtracting various parts. Tenor Sam Smith made a beautiful contribution to these pieces.

Conductor John Renke, the founding music director, is leaving the chorus to go to a new position in Honolulu. Midway through the second half, the chorus divided into two, singing one piece for the men, another for the women, both without a conductor, as if anticipating Renke's absence. The nine men sang Poulenc's Seigneur, je vous en prie (Lord, I beseech you) with impressive ensemble, demonstrating that Renke has taken the group to such a high level of competence that there is considerable hope of their attracting an excellent candidate to replace him.

The four women, all supposedly sopranos, revealed an amazing capacity to sing in the range of a Sweet Adelines quartet: one on top, two in the middle, and one down in the basement. They sang a setting of Nigra Sum (I am black, but comely) by the chorus' composer-in-residence (and singing member) Cole Thomason-Redus. The song is a splendid achievement — the most dissonant of all the new works, and the most beautiful piece of dissonance I can remember hearing. It was surely helped by a stunning performance.

The chorus' intonation was so good that I began to wonder why it even bothered to use a pitch pipe to sound the opening key. And I discovered after the concert that the pitch piper for the women's quartet sounded the wrong note, one whole step too low — a potential problem for the soprano singing baritone. She survived that mishap, and the intonation, according to the composer, was impeccable. Fortunately, none of the women is afflicted with perfect pitch, so transposing was easy.

The final number on the program, Gawthrop's Sing Me to Heaven, consisted of a lovely paean to singing and to love. The text, a poem by Jane Griner, made a fitting end to the concert: "And my soul finds primal eloquence, and wraps me in song ... Sing me a love song, sing me to Heaven."