Mahler's 1910 Eighth Symphony, called by some (but surely not by high-minded musicologists) "Symphony of a Thousand," is among the most massive works in all of music. It requires eight heavy-duty soloists and, in the current San Francisco Symphony production, it uses three choruses of some 250 singers, and two orchestras, totaling more than 100 instrumentalists.
The Eighth is really tough on soloists, making most Strauss operas (conductor: "I can still hear the singers!") a child's play. On the other hand, if the singers outdo the enormous orchestra and huge chorus, Mahler suffers. 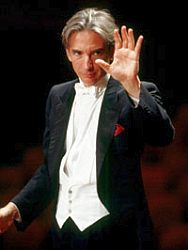 Last Wednesday, as Michael Tilson Thomas led a grand and (inevitably) grandiose performance at Davies Symphony Hall, that contest was a draw, and everybody — including the audience — went home happy. One small exception: This fervent disciple of Laura Claycomb waited an hour and a half for the invisible soprano — somewhere up in the balcony, unseen by me — to sing Mater Gloriosa's two lines. Komm! Hebe dich zu höhern Sphären (Come! Rise to higher spheres). Indeed, Komm, Komm, let her sing more! 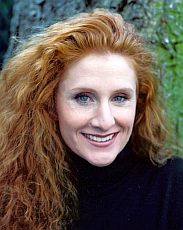 And let me clear up the "grandiose" reference above: It doesn't sound nice, and it wasn't meant to be. An avid Mahler fan, I am not all that fond of this elephantine exercise in aural gigantism, with an occasionally convoluted text, though obviously I appreciate its beautiful portions, especially the finale, 15 minutes of heavenly music about Angels, Blessed Children, Younger Angels, More Perfect Angels, and so on, ascending to heaven.

As usual at performances of No. 8, I was not much involved emotionally, but this time I was impressed mightily by the performance, especially that fabulous balance mentioned above. MTT marshalled his troops so well that soloists, orchestra, the SFS Chorus, Kevin Fox's Pacific Boychoir, and Susan McMane's San Francisco Girls Chorus each shone individually and together. 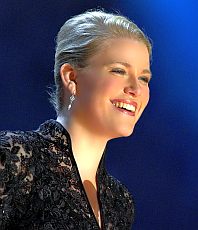 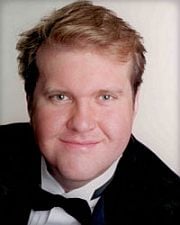 In both parts, including the near-cacophonic opening, and the complex, pious score for the final scene from Goethe's Faust, MTT maintained a firm balance, no matter what the volume.

In all, the most important presence was the unseen (until the curtain calls, that is) SFS Chorus Director Ragnar Bohlin in his first "really big production." Although we have heard his work during the year since he took over the chorus from Vance George, this was the great test — and he passed with all the colors of the rainbow.

The chorus' unity, diction, projection, and presence were all impeccable, at times startlingly so. With all that big sound and vying with the orchestra, the SFS Chorus nevertheless came through with a crystalline rendering of the German text — an impressive accomplishment in itself. The combination of precision and a sense of freedom in the phrasing spoke of a major-league chorus working hard, but without showing effort.

In the orchestra — with the hardest-working second violins seated stage left, switching positions with the usual places for cellos and basses — every section fired on all cylinders. Strings, woodwinds, and brass were vying for excellence and very much playing on the same team.

I had some misgivings at the beginning — "Veni, creator spiritus" was more loud than powerful, the ecstasy of faith just a bit too measured, and "Fons vivus, ignis, caritas" (Living fountain, fire, love" was too matter-of-fact. But after the excitement of the individual solos, followed by a white-heat finale, even this lukewarm Eighth listener gladly joined the standing ovation.

There was something else unusual about this program: four performances and not a ticket to be had. With that marketing coup, each evening has turned into a Symphony of Three Thousand. As to those who couldn't get in, the Symphony will issue a recording of the concert, part of its complete Mahler Project.