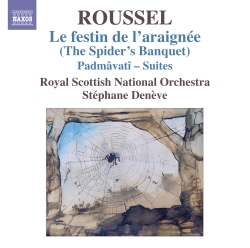 When you enjoy the work of a particular composer, it can be most gratifying to find another one who presses the same buttons of appreciation. If you delight in the music of Maurice Ravel, especially his lush and hothouse works like Daphnis et Chloé, or the more exotic scene-painting of Claude Debussy, then allow me to recommend two early stage works by Ravel’s close contemporary Albert Roussel: Le Festin de l’araignée and Padmâvatî. This CD from Naxos is the first of two Roussel albums under review here.

While he’s not as famous as Ravel or Debussy, Roussel was an excellent craftsman and an imaginative composer who holds a prominent place in any survey of modern French music. Some external circumstances may have contributed to his lower profile. He was a late starter who didn’t begin studying music seriously until he was 25; as a consequence, his acknowledged oeuvre didn’t begin until he was about 30. And, after his Impressionist beginnings, he changed his style significantly in later years, which may have blurred his image, though several such shifts never hurt Stravinsky.

Le Festin de l’araignée (The spider’s banquet, or The spider’s feast) is a ballet written in 1912 depicting the titular spider and its various insect prey. On this recording, the Royal Scottish National Orchestra, conducted by its music director, Stéphane Denève, performs the complete half-hour ballet, rather than the 15-minute suite more commonly heard. The garden setting is depicted with lush, picturesque scenery in rich Impressionist harmony. Scene-setting alternates with dances or marches depicting the insects. The ants bustle on with good humor, the butterfly flutters in a manner reminiscent of Respighi’s Birds, and the mayfly dances in a lively triple time that’s the only traditionally balletic moment in the piece. A slightly lurid moment arrives as the spider devours the butterfly, and there’s harmonically ornate, dark funeral music for the mayfly.

While he’s not as famous as Ravel or Debussy, Roussel was an excellent craftsman and an imaginative composer. Tracking is tightly connected to the individual scenes — there are 12 tracks for this one work alone — allowing the listener to follow the scenario with fair confidence. The music, apart from a couple of brief breaks, is continuous.

The scoring is always colorful and individual, with prominent parts for the winds and harp. The strings get a chance to vanish off the top of a high rising figure, and emit a few other ghostly effects, as well. Overall, the sound of this ballet is a combination of a great deal of Ravel’s sensuous Daphnis et Chloé — which was completed the same year — and, thanks to the prominent oboe part, more than a touch of his Tombeau de Couperin in its perky orchestral version. 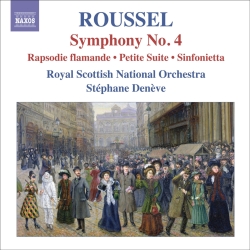 Padmâvatî, not as well-known a work, has a different origin. As presented on this disc, it consists of two brief suites of orchestral music that Roussel assembled from an “opera-ballet” of that title, written during the war years and premiered in 1923. The opera was based on a novel about India, a country Roussel visited before composing it. The resulting slight Eastern tinge to the music gives it a flavor more akin to Debussy than Ravel. The suites, each of which is continuous though divided into movements, wash between slow atmospheric music, richly orchestrated without the intense sensuousness of The Spider’s Banquet, and succinct uprisings of emotional climax. The Royal Scottish National Orchestra performs all this with sober brevity.

That’s not all, though! Denève and his orchestra have issued four additional all-Roussel albums, each featuring one of his four symphonies together with some related orchestral works. I have here the CD with the last of the set, Symphony No. 4, composed in 1934. The other four works on the album also all date from the composer’s final decade, 1927–1937. By the time of these works, Roussel’s style had changed considerably. Like many composers of the 1920s, he’d become a neoclassicist of sorts, in his case with the emphasis on the “of sorts.” For though his later music is concise, and considerably drier and more astringent than his earlier work, it never loses emotional expression, the power of its climaxes, or a sense of subtle beauty.

This is one of Naxos’ most winning pairings of artists and repertoire.Less vehement and more introspective than the better-known Third, his Fourth Symphony mixes dark lyricism with carefree cheerfulness, particularly in the chipper, even joyous finale. The orchestration, though heftier than in the earlier stage works, is recognizably by the same composer, in view of its attractive wind solos and sudden bursts of jagged energy. A Lento introduction and a long slow movement show how far Roussel had come from the Impressionism of his earlier works. The harmonies are rich and complex, even venturing into bitonality, while remaining clean and light in the service of the contemplative melodies.

On the CD, the Symphony is followed by Flemish Rhapsody, employing several Renaissance-era popular tunes. Although the piece is lively enough, it’s clear that the populist idiom of the likes of the English “cowpat” composers is not Roussel’s most comfortable language. The remaining three works, however, show that his true additional orchestral talent after ballets and symphonies was as a miniaturist. The small-scale movements of these works — the austere and precise Sinfonietta for Strings, the blunt and punchy Concerto for Small Orchestra, and especially the light and urbane Petite Suite — are all fluent and charming music by a composer at ease with his medium. They complement the heavier, more solemn tone of the Fourth Symphony and the drama and painterly colors of The Spider’s Banquet. For all his lyricism, Roussel is not a tuneful composer. He is, though, a fine craftsman brimming with worthwhile ideas.

Throughout both recordings, the Royal Scots are consistently on the mark in skill of execution and dedication to the spirit of the music. Whether this remarkable affinity is to be attributed to their French conductor, Stéphane Denève, or to some national strain dating from Scotland’s “Auld Alliance” with France, it’s one of Naxos’ most winning pairings of artists and repertoire.