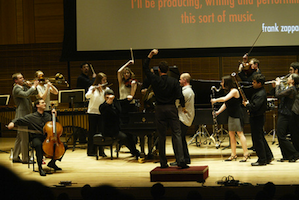 Since hearing Alarm Will Sound’s all–Steve Reich program at Bing Concert Hall at Stanford on Saturday night, I have struggled to describe the experience. Perhaps the most accurate was Trish Bryan’s description. Bryan, the board chair of the American Classical Music Hall of Fame, was in town to honor the composer with a medallion for his contributions to American music. She explained that, as listeners, we understand Reich’s music intellectually, but we experience it sensually.

The concert opened with Clapping Music, featuring Reich himself, along with the entire Alarm Will Sound ensemble, standing in pairs scattered over the stage. Although I have listened to many half-baked attempts to “play” this piece in undergraduate music history courses, hearing this work performed with conviction by excellent musicians was an entirely new experience. The intense, driving rhythms created a sonic background in which different patterns slowly rose out of the piece and emerged full force, before retreating back into the depths.

Clapping Music was followed by the U.S. premiere of Vincent Corver’s arrangement of Reich’s Piano Counterpoint. Rather than featuring the six pianos for which the work was originally composed, this version featured a single pianist collaborating with recorded versions of himself. Here, the superb playing of pianist John Orfe must be highlighted. Indeed, his playing was so precise and the recording so high-quality that there were moments in which I could not tell whether the playing was live or not. Orfe added a dash of theatricality to this piece when he stretched his arms wide and made a point of turning the page in an exaggerated manner as the recording of the other pianos continued on, unabated.

The first half of the concert ended with what was for me the pinnacle of the evening. Composed in five movements, City Life painted vivid depictions of New York City. From construction sites, to a foggy night on the Hudson, this piece captures the capricious moods of that great city. The work featured warm, rich timbres and lyrical flute lines that vaguely smacked of the Law & Order TV theme song. In City Life, the familiar sounds of foghorns, pile drivers, alarms, and snippets of police conversation (played live on revamped keyboards) somehow morphed into unfamiliar, otherworldly noises. Alarm Will Sound managed to make Reich’s soundscape almost romantic, and surely converted any skeptics left in Bing Hall into Reich fanatics.

The second half of the program also consisted of three pieces, including the American premiere of Reich’s Radio Rewrite, which was composed for Alarm Will Sound and the London Sinfonietta, and commissioned by Stanford Live.

The first piece of the second half stems from Reich’s opera The Cave. The cave in question, as Reich identifies it in his turgid program notes, is known as the burial place of Abraham and his descendents, and the only place in the world where Jews and Muslims both worship. In the piece, the jewel-toned voice of soprano Melissa Hughes popped, seemingly effortlessly, into the stratosphere, lifting the rest of the singers with her. During the last portion of the piece, the listener could almost feel the desert heat as Reich’s pulsating music conveyed the hallucinatory experience of both mirage and miracle. The harmonies rubbed up against each other and created a beating sensation somewhat reminiscent of Balinese gamelan.

Of a Kind, on a Licorice Stick

The penultimate piece on the program, New York Counterpoint (1985), was related in many ways to the earlier Piano Counterpoint (1973). It featured 10 recorded clarinet tracks, with the 11th played live against the others by clarinetist Bill Kalinkos. At first, the constant presence of a relentless rhythm filled the hall, but as your ears settled into their new environment, various shapes, colors, and textures began to emerge. I found myself concentrating intently on a single pattern, only to discover seconds later that it had slipped back into the background. This minimalist trademark experience never ceases to fascinate.

The listener could almost feel the desert heat as Reich’s pulsating music conveyed the hallucinatory experience of both mirage and miracle.

While I don’t claim to be a knowledgeable Radiohead fan, by any means, I found myself eagerly anticipating Radio Rewrite. The parallels between Reich’s soundscape and that of Radiohead seem like fertile ground for a new composition. The five-movement piece was seamless and allowed the listener, once again, to get swept away into the mystically hypnotic world of Steve Reich. My only wish was that this piece had been featured earlier in the program. By the time Alarm Will Sound reached this piece, rather like aural palette fatigue, I found myself listening less critically and occasionally zoning out as I stared across the hall at other audience members. Interestingly, they all looked much like me: happily entranced.

Alarm Will Sound brought warmth, vitality, and theatricality to a program focused on the minimalist master Steve Reich. Through their programmatic choices, they managed to create both change and variety in music that doesn’t necessarily value contrast. The varied instrumentation and genre-hopping abilities of a large ensemble served them well. As I left the concert hall, I turned to a fellow concertgoer and said, “I am not sure what I just heard, but I know that I really liked it.” She gazed back at me, her eyes wide, and nodded, as a small smile spread across her face.