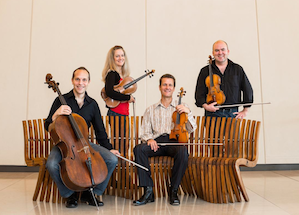 Violinist Geoff Nuttall of the St. Lawrence String Quartet says that celebrating the quartet’s 25th anniversary season is “just really an excuse to do more stuff.” Nuttall and his colleagues did some of that stuff on Sunday afternoon at Stanford’s Bing Concert Hall in a concert presented by Stanford Live. Some of it was just stuffy, and some of it was as delicious as Thanksgiving turkey stuffing.

The ensemble is new as well as old. Former violinist Scott St. John has moved home to Canada and has been replaced by another Canadian violinist, Mark Fewer. He joins Geoff Nuttall, violist Lesley Robertson, and cellist Christopher Costanza, and this was my first opportunity to hear the new grouping. In recent years, Nuttall and St. John were trading off violin parts. For this concert, though, Nuttall played first and Fewer second for the entire program. Fewer’s violin tone is more similar to Nuttall’s high earnestness than St. John’s was; he seemed to fit in just fine.

Sunday’s most delectable stuff was Schubert’s String Quintet in C with David Finckel joining to play second cello. He is retired from the Emerson Quartet — the ensemble that was the St. Lawrence’s coach when it was just starting out. Finckel’s serene presence in the back, plucking away on the pizzicato notes that dominate his part, provided a secure base to the ensemble’s careful presentation of this expansive masterpiece.

After nearly two years of performing in Bing Hall, the St. Lawrence players have mastered a true pianissimo that still manages to project audibly throughout the spacious hall.

Both inner movements of the Schubert have contrasting middle sections, which the ensemble treated as separable and distinct inserts. In the Adagio, the outer sections were hesitant and thoroughly hushed, with Nuttall’s tiny chirps a byword for quietude. After nearly two years of performing in Bing Hall, the St. Lawrence players have mastered a true pianissimo that still manages to project audibly throughout the spacious hall. Within this frame, the violent middle section burst, after a pregnant pause, like a thunderstorm over the landscape.

In the Scherzo, the moods were reversed. The outer Scherzo was lively and rustic, with a bouncing rhythm akin to the elastic snap that kept the opening movement and finale vital and thrusting. Here it was the Trio that was quiet, the music of an overcast and melancholy day. Though the weather outside was warmer than that, the music was so convincing I was almost sure I’d find a change when we emerged from the hall. At the end of the Trio, Fewer led Robertson and Costanza in a strikingly driving version of the stuttering retransition building back up to the Scherzo’s energy.

The concert opened with Haydn’s Quartet in D Minor, Op. 9, No. 4. Haydn’s earliest quartet in a minor key, it’s a definitive expression for this medium of the “Sturm und Drang” style that dominated his symphonies of this period, around 1770. Rather than tearing their hair over it, though, the St. Lawrence players determined to civilize the music. The result was charming and lovely.

Typically for Haydn, the score plays with long expectant silences, which the players supplemented with tiny added pauses between phrases. It kept the dramatic opening movement cool and quaint. The lyrically cantabile Adagio, by contrast, was geared up with a precise piping tone and an energetic drive. Nuttall played his optional ad lib cadenza at the end of the movement with succinct briskness. The trio of the minuet, scored literally for a trio of the two violins, the first playing double-stops throughout, gave Nuttall and Fewer a chance to match their sounds attractively.

To be stuffed in between Haydn and Schubert is an uncomfortable position for a contemporary composer, as Stanford professor Jonathan Berger ruefully acknowledged in introducing his String Quartet No. 6, receiving its first performance in the middle position at this concert. Whether a listener liked it or not, its severe modernism sat uneasily in that company.

Berger seasoned his modernist stuff with a sprinkling of jazz. Especially in the first movement, bent or slid notes, and outbursts of lively rhythms, co-existed with heavily dissonant lines and harmonies. The academic side prevailed over the jazz. Berger titled the work “Swallow” and dedicated it to the memory of his late brother, an avid lover of birds. High strained figures and tight angular flutters might be avian representations, yet, if so, those birds sounded trapped between the panes of a sliding glass door, desperate to get out. If there was anything appealing in this work, it came in the two slow movements (one marked “Lento” and the other “Beckoning, desolate, fragile,” an unusual choice of tempo), each of which consisted of taut, gulping lines, mostly for viola or cello, over thin long-held notes. It was, however, a distant appeal at best.

The St. Lawrence Quartet has more new stuff in store, having commissioned quartets from John Adams and Jaroslaw Kapuscinski to be performed later in the season. What kind of stuffing they’ll provide, listeners will have to wait and hear. There will also be Haydn and Beethoven, who always deliver the right stuff.