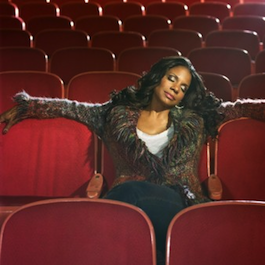 No standard review can adequately describe the Fresno-born phenomenon known as Audra McDonald. Symphonic chanteuse, Broadway star, charming raconteur, and civil rights champion, the operatically equipped star has just proven once again that she has few if any equals on today’s stage.

In the midst of a whirlwind tour that has already taken her to 23 or so cities, McDonald and her trio arrived in Stanford University’s Bing Concert Hall on Friday night for an intermission-less show. The evening could have easily extended longer than 90 or so minutes, had it not been for her commitment to reprise the show in Sonoma State University’s Weill Hall the next day.

McDonald shared the stage with three widely-spaced, musicians, amplified, like the singer — drummer Gene Lewin, music director and pianist Andy Einhorn, and towering bassist Mark Vanderpoel. Together, they led us through songs that spanned 1929-2011, and dovetailed delightfully with protracted glimpses into Audra’s life as child and mother in Fresno and beyond.

Talk and song melded so seamlessly that, without notes, it would be hard to remember what came first. McDonald’s verbal warm-up included apologies to the members of Bing’s in-the-round audience seated behind her “that are going to see my rear all evening.” Thus she greeted a school she last visited in 1983, when her mother received her Ph.D. from Stanford.

From there we went, with ample pauses for patter, to a song from 1959’s Tony Award-winning musical Fiorello; “Stars and the Moon”, a song about relationships from 1996 off-Broadway review Songs of a New World by Jason Robert Brown; another she became reacquainted with when sung by a very cool 88-year-old “street dude” in front of Chipotle’s in Harvard Square; and a fourth, “I Double Dare You,” from 1937, which was used on the soundtrack of Woody Allen’s movie, Radio Days. (There was no program; songs were announced from the stage.)

It was all fabulous. True, seated at the left end of a row directly facing the stage, it was initially disconcerting to discover the sound coming, not from McDonald and company, but rather from speakers hanging higher up on the left. Lord knows how weird the imaging was for people seated on the sides or behind the foursome. And as blessedly clear and non-distorting as the sound system was, it would be foolish to pretend that it conveyed anywhere near the full range of colors in McDonald’s voice and accompaniment, let alone their dynamic compass.

It was especially sad that Vanderpoel’s acoustic and electric basses were either under-amplified or short-changed by the speakers. Not that it mattered in the end, because McDonald’s vocal beauty, energetic delivery, impeccable intonation, and inimitable style, combined with a fast flicker vibrato that could be tamed to straight tone at will, ruled the show.

No Audra McDonald concert is complete without her singing a Stephen Sondheim song, we were told. Here we had two: one from 1988’s Into the Woods that tells the story about post-“Happily Ever After,” and a perfect rendition of the wordy “Ordinary Mothers.” Sitting at the piano, she produced a song by Adam Guettel, which she dedicated to her father, who died in a plane crash.

While making time for funny stories about her daughter, a hilarious song that dissed Baltimore, and applause-earning references to her husband’s star turn in the Broadway revival of Les Miz and her own in The Gershwin’s Porgy and Bess, she let it be known that she prefers songs with messages. Thus, after crediting “one of the greatest singers this country has ever known,” Judy Garland, McDonald noted that after Garland’s funeral on June 22, 1969, a group of her greatest admirers proceeded to a bar in Greenwich Village to relax and reminisce. Then the police arrived to stage another raid on the frequently raided bar. The bar was the Stonewall, and that night marked the start of the Stonewall Rebellion that has forever changed how America and the world view gay men, lesbians, and trans people.

“People ask me why I do so much work for the civil rights of others,” McDonald said (in paraphrase).” I'm able to stand before you because so many people dedicated to civil rights, who came before me made it possible for me to be here. I, in turn, want to support the civil rights of others.” Thus she bid adieu with a deeply felt, anything-but-melodramatic, hope-filled rendition “Over the Rainbow” that this veteran of the Civil Rights and early Gay Liberation Front movements will hold forever in his heart.