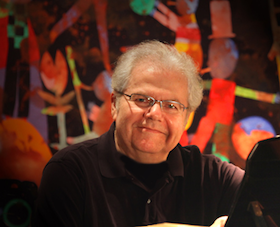 The inaugural season for the new Bing Concert Hall, presented by Stanford Live, began this year on Jan. 11 and continued on Tuesday night with a solo piano recital by Emanuel Ax. Janos Gereben has already described many stunning features of this spectacular new hall for SFCV, and those who have not yet had the opportunity to visit it — which is not as simple as it seems, since most events of this season are sold out — may read his report.

I gazed in wonder at many architectural marvels, both outside and inside the hall itself, but one sight was a bit alarming: The piano was situated on the stage at the ground floor level, surrounded by built-in risers. The risers were turned into additional rows of seats for the listeners. The piano lid was removed.

Now, taking the lid off is almost never a good idea: The lid reflects the sound and acts as an amplifier. The only exception is for a piano duo, with two pianos nesting back to back. In this case, the lid of the piano facing to the right is indeed removed, but the lid of the other piano compensates and projects the sound of both instruments. 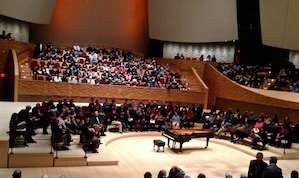 These were my thoughts before Emanuel Ax appeared on stage and sat down at the piano. And immediately I tried to put myself in his shoes. Would I want to perform with people sitting next to my left hand and also staring straight into my face across the piano? I would find it rather distracting and uncomfortable. Of course, many pianists like playing in intimate, drawing-room settings. But those are often informal gatherings of people many of whom the artist may know. Here, however, Ax was surrounded by total strangers, at a formal recital in a sold-out concert hall, under powerful spotlights.

And, speaking of the lights, in addition to the piano they also brightly lit all the backpacks, old jeans, and running shoes around the instrument. If the pianist did not mind the distraction, some listeners in the hall certainly did.

The program that night consisted of two blocks of music: Beethoven in the first half and Chopin in the second. Ax delivered Beethoven’s Sonatas with a surprising, yet compelling, tenderness and sensitivity rather than the much more common stormy truculence. The A-major Sonata Op. 2, No. 2, especially stood out in this respect. The unhurried, relaxed pace of the first movement; the dignified, if somber, air of the slow movement; and the fleet lightness of the last two movements were marked by technical command and poised finesse.

The problem that became evident from the outset, however, was beyond the artist’s control. The unfocused sound of the lidless piano did not project well. Moreover, it was rather fuzzy, so that even Ax’s impeccable clarity of articulation in fast passages came out blurred, as if he pedaled the scales (which he didn’t; I watched his right foot like a hawk).

The two Beethoven Sonatas were separated by Schoenberg’s Six Little Pieces, Op. 19. The composer wrote the first five pieces in one day, on Feb. 19, 1911. The sixth piece was composed a few months later, and it is reputed to be a reflection on Mahler’s funeral, which Schoenberg attended. Ax presented these aphoristically short pieces as mysterious, enchanting, and somewhat Scriabinesque little gems.

The Chopin part of the evening opened with the E-flat Major Nocturne, Op. 55, No. 2, followed by his last Piano Sonata, Op. 58. Paradoxically, Ax’s Chopin sounded more turbulent than his Beethoven — with the exception of the gossamer scherzo and refined slow movement of the Sonata. Another interesting surprise was hearing the first movement of the Sonata according to the French/English first editions rather than to the commonly performed German one. (Chopin taught his students using the French edition; he neither proofread the German edition nor used it with his students.)

Ax played a charming encore … with the same refined musicianship, elegance, and finish as the rest of the program.

Responding to a standing ovation after the Sonata, Ax played a charming encore, Schubert’s Impromptu in A-flat Major, Op. 142, No. 2, with the same refined musicianship, elegance, and finish as the rest of the program.

The effect of his playing could have been even more profound in a more conducive hall setup. There is still work to be done about tuning Bing Hall to the needs of piano recitals, such as the height of the adjustable stage, the placement of the piano, and so forth. And, for the love of God, don’t take off the lid!