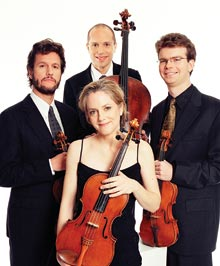 The St. Lawrence Quartet bid farewell to departing violinist Scott St. John, who’s moving back to his native Canada, with a slightly unusual Stanford Live concert at Bing Concert Hall on Sunday. Eschewing its typical Haydn or John Adams, the Quartet presented an all-Czech program: two works by Antonín Dvořák from 1878–1893, and one by Bohuslav Martinů from 1938, simply because that’s the music St. John wanted to go out on.

More normally, for a certain value of St. Lawrence gig, it was not quite a string quartet concert. Only the Martinů, his Fifth Quartet, was for the normal ensemble of two violins, viola, and cello. St. John led this as first violinist, the position he also took for Dvořák’s Quintet in E-flat, Op. 97, for which Jonathan Vinocour, principal violist of the San Francisco Symphony, joined the St. Lawrence players as second violist.

The other Dvořák piece was a little more out of the general run: his Bagatelles, Op. 47, for two violins, cello, and harmonium. The harmonium is a reed organ, powered by foot pedals, that was once common in genteel parlors. Dvořák’s charming suite of five miniatures rarely gets performed, because who has a harmonium these days? Stanford has one, astonishingly enough, and that fact enabled this piece to be put on. Although the instrument is tuned slightly flat, as it turned out, strings accompanying it can easily adjust for that.

At the concert, St. Lawrence’s other violinist, Geoff Nuttall, introduced Stanford University Organist Robert Huw Morgan, who then introduced the harmonium. Morgan had been wheedled into playing the thing, even though he had last seen a harmonium as a boy, in his aunt’s parlor. As an organist, he’s not accustomed to foot-pumping his own bellows or adjusting dynamics with his knees, so this was a new experience for him.

Performances and recordings of the Bagatelles — those that don’t substitute a piano (which doesn’t work because the harmonium part consists largely of held chords) — usually run the harmonium either too loud or too soft. This performance fell into the “too soft” category. From my seat up in Bing’s highest terrace, with excellently balanced yet rather small acoustics, the harmonium was often barely audible, providing just a hint of exotic reedy color behind the charming melodies of Nuttall, St. John, and cellist Christopher Costanza.

The joy of the playing lay in the energy and ensemble rather than in the virtuosity or tone quality of the solos.

The three string players, joined by Vinocour and Lesley Robertson on viola, gave a welcome helping of bounce and drive to the often leisurely, contemplative Dvořák Quintet — especially in the first movement and the scherzo, the latter so thematically reminiscent of the finale of the Bagatelles. Like the Symphony From the New World and the “American” Quartet, the Quintet was written during Dvořák’s Iowa summer vacation of 1893. While it shares their genial air and their four-square phrasing, it’s a more inward, less-hearty work than its companions. This performance mitigated that.

The composer provided many solos for all; the joy, though, of the playing lay in the energy and ensemble rather than in the virtuosity or tone quality of the solos. There were some individual distinctions, such as Nuttall’s tendency to treat sforzandos as swells or even “bent” notes. The music reached sublimity in the accompaniment to a St. John solo in the scherzo’s trio, a warm Dvořák moment to treasure, and a great final gift to the departing violinist.

There was one particularly notable passage featuring Scott St. John to take away as a good memory of his playing.

Then there was the Martinů. His Fifth Quartet is, in the St. Lawrence players’ view, the “perfect” complement to Dvořák, yet listeners may find it less so. It’s modernist in the Bartók mode, full of jagged rhythms and huge dissonant chords for three or four players together, often while one is giving a melodic solo. Inspired by a personal affair of the heart of the composer’s, it has more affinity, both in inspiration and in musical language, to Janáček’s “Intimate Letters” Quartet than to the music of Dvořák, the most straightforwardly cheerful composer in the classical repertoire.

Yet the St. Lawrence did its best to make evident the affinity to Dvořák. The character, if not the harmonic language, of chordal passages accompanying solos is equally characteristic of the Martinů Quartet and the Dvořák Quintet. And the players brought to Martinů even more of the energetic gusto that had made the Quintet so much fun. This rhythmic drive is what made the Quartet go. If not enjoyable in the conventional sense, it was captivating and satisfying. Here, too, there was one particularly notable passage featuring Scott St. John to take away as a good memory of his playing: a series of haunting oscillating double stops in the introduction to the finale.