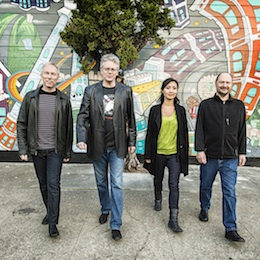 For 40 years, the Kronos Quartet has specialized in the newest of contemporary music. Times change, and styles drift in and out of favor, so the cutting edge needs frequent whetting. For a 40th-anniversary concert at Bing Concert Hall, sponsored by Stanford Live, on Wednesday, the players of the Kronos Quartet — three veterans and their new and fearless cellist, Sunny Yang — took the opportunity to look back at some of the contemporary trends the group has fostered over the years.

Take Philip Glass. Though he’s worked with Kronos in the interim, his String Quartet No. 6, written for Kronos last year and now receiving its first Bay Area performance, is his first numbered quartet since Kronos similarly commissioned No. 5 back in 1991. The No. 6 is in some ways quite unlike Glass’ earlier quartets, and not to my ear very like his recent symphonies, to which he compares it in his program note, either. It is, though, still unmistakably Glass, so I doubt the differences would satisfy those who inevitably carp at his music.

Those inevitable harmonic progressions, and the abruptly shifting rhythms that keep chugging along, that we all know — and some of us love — from the Glass of yore are still there. In the first movement in particular, though, they’re mated with some surprising things: a deliberately uncoordinated distortion almost painful in its impact, a disintegration of phrase and interplay, and a level of dissonance not heard in Glass’ music these 40 years. The remaining two movements of this 20-minute work are calmer but keep returning to the same hard-strung base before coming to peaceful conclusions.

Consequently, the remains of minimalist technique still detectable in Glass’s writing — hardly more evident than in some composers who, though inspired by minimalism, don’t receive that label, so long as their names aren’t Philip Glass — didn’t make this quartet the most “minimalist” work on the program at all.

That honor goes to Aheym (Homeward) by Bryce Dessner, a composer whose bent for writing music that seems minimalist in a classical context quite possibly derives from his rock music background, because in some ways the piece resembled a rock song. It’s a hard, dry work of such energy that first violinist David Harrington described it afterwards as “quartet music that leaves you out of breath when you play it.” Formally, it’s just a succession of compositional techniques, many familiar from the minimalist toolbox — cell structure, phase shifting, hocket ostinato — with passages of ponticello and other bowing practices to add variety to the sound. With all that, I found it as compelling as a good rock song. That it was amplified electronically didn’t hurt the comparison.

The other really lively work on the program was Death to Kosmische by Nicole Lizée, a piece full of electronic bleeps, growls, buzzes, cracklings, and drum beats — some of them, though apparently not all, provided by the performers, who’d put down their instruments to pick up gadgets that looked like anything from an autoharp to a toy robot with a red light at the end of its long neck. The music was so full of these sounds that it was hard to say how much a string quartet contributed to the proceedings. There were a few interesting warblings and howls hiding in there.

The classic modernist offering on the program, the first work Kronos ever rehearsed, was the tiny Six Bagatelles, Op. 9, by Anton Webern, the modernist whom all modernists looked up to for a half-century. This came out in an entirely dry style, like hard little meteors carrying an indecipherable message from beyond the solar system. Though Webern can be beautiful and emotionally coherent, few care to play him that way.

A typical moment came with Harrington and Sherba on violins declaiming harsh monotonic figures on an unresolved harmonic base. Hank Dutt stepped in to provide a harmonic resolution, which then gave way to a yearning chromatic melody from Harrington over soft support from his colleagues.

Besides Glass’ quartet, the concert featured another recent numbered quartet by a senior composer, the Quartet No. 3 by the Ukrainian Valentin Silvestrov. In seven short movements — though not as brief as Webern’s Bagatelles — Silvestrov delivers what also seems like a deep cryptic message from a long way off — though also neither as far nor as cryptic as Webern’s. The piece was slow and carried a tentative air. Not minimalist in style, it nevertheless incorporated a lot of repeating figures, and was actually more harmonically consonant than either the Glass or Dessner works. A typical moment came with Harrington and John Sherba on violins declaiming harsh monotonic figures on an unresolved harmonic base. Violist Hank Dutt stepped in to provide a harmonic resolution, which then gave way to a yearning chromatic melody from Harrington over soft support from his colleagues.

Two arrangements of offbeat works filled out the program, both of them pieces that Harrington heard at some point and, in typical Harrington style, became obsessed by and decided he just had to play them.

One was the Prelude from Wagner’s Tristan und Isolde. This classic is the foundation stone of modern harmonic practice, so it deserves a place of honor in the repertoire. Emotionally, though, it’s entirely a 19th-century work, using a language unlike the drier and more objective style of more typical Kronos repertoire. As a performance of a work that I know, this seemed curiously formal, as if the players were unwilling to give in to the emotion they were so earnestly trying to convey. Aleksandra Vrebalov’s arrangement is for one live and two recorded string quartets. The point at the first tutti when the recorded quartets come crashing in was not the most rewarding moment in my recent concert-going experience.

The other arrangement was of a riveting traditional folk song, Tusen Tankar (A Thousand Thoughts), as performed by a Swedish folk band called Triakel. Scandinavian folk music is a little-known treasure. This slow, haunting song, played by the two violins in mixed melody and counterpoint over a quiet bass in viola and cello, was not only beautiful, it strikingly resembled a passage in the Silvestrov.

The encore was the even more fabulous Last Kind Words, from a recording by the elusive Geeshie Wiley, with Harrington’s violin channeling this 1930s female blues singer over a firm grounded pizzicato from his colleagues, in an arrangement by Jacob Garchik far more to my taste than the original. This convinced me that, if they haven’t done it already, Kronos should play a concert consisting entirely of arrangements of popular and folk songs. I would so be there.