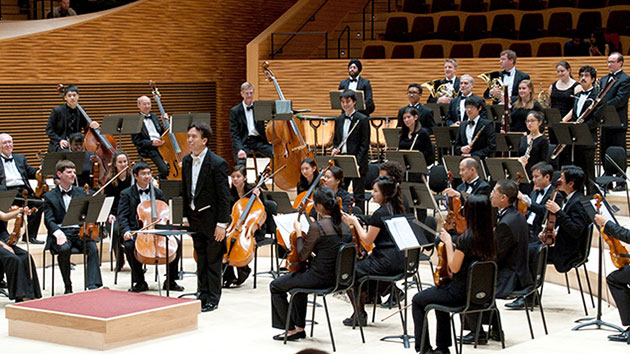 Franz Joseph Haydn (1732-1809) is the least celebrated of the four great Viennese classicists: himself, Mozart, Beethoven, and Schubert. However, he lived the longest and went through the greatest changes in style. He composed over a hundred symphonies, which is more than the other three wrote all put together.

Sunday’s concert ran down the extremes on both accounts. Jindong Cai conducted the Stanford Philharmonia Orchestra in Haydn’s first symphony, No. 1 (1759), and his last, No. 104, from some 36 years later (1795).

In many respects, they’re quite different. No. 1 is much briefest. It has three movements and No. 104 has four, plus a larger orchestra, especially in the winds. No. 1’s first movement is lean and nervous and its slow movement stealthy over a walking beat for bassoon, cello, and harpsichord – a holdover from Baroque continuo. No. 104 is grand and genial, and altogether calmer. No. 1 dips continually into brief passages in the minor, contributing to its darker tone. No. 104 takes a more sectional approach to harmonic structure.

Yet they have many similarities. They’re both in the same key, D Major. They’re recognizably by the same composer – one with a liking for a bustling air and intricate detail. Both symphonies have thoroughly cheerful finales, an accurate reflection of a happy and well-adjusted composer. Both were written for patrons, typical of music before Haydn’s successor, Beethoven, pioneered the idea of the composer as an independent artist. No. 1 was work-for-hire for Haydn’s first regular aristocratic employer, Count Morzin, while No. 104 was written for J. P. Salomon, the impresario who brought Haydn to London to perform this and many other new works.

In this performance, No. 1 fared better. The orchestra drilled through Haydn’s lean and hungry scoring with compelling flow. The slow movement, though long and repetitious, had a vivid dynamic push. No. 104 was more of a block of granite, massive and static. The music felt less oriented toward achieving a goal, and the horns and trumpet blared heavily.

Sunday’s concert concluded with a work of even later date: the Missa in angustiis or “Nelson” Mass in D Minor (1798). Haydn composed this at the command of the new prince of the Esterházy family, his long-time patrons and employers.

There were several reasons for this, all to the credit of the performers. Start with the spirited conducting of Stephen M. Sano, Stanford’s principal choral director. The tiny orchestra – Haydn didn’t have large forces at his disposal for this work – played with tremendous sweetness. The violins in particular made the most graceful interjections. The players consisted largely of the Stanford Chamber Strings, with three members of the St. Lawrence String Quartet serving as section leaders. Only the organ was somewhat buzzingly distracting during the opening sections of the work.

The chorus, the Stanford Chamber Chorale, was also small. Its 31 members were spread all across Bing’s generously-sized stage. They were mixed together, not separated by section, so instead of antiphonal responses, the wide spacing gave a big sound, as if the chorus was larger. The voices made some lovely cascading sounds, with strong textures in the “Sanctus.”

Of the four soloists, mezzo Danielle Reutter-Harrah and tenor David Kurtenbach had the warmest and most intimate voices, though they also had the smallest parts. Baritone Jeffrey Fields, a late substitute due to an illness, was calmly majestic in the “Qui tollis,” although some of the lower notes in the bass part were beyond his range.

Soprano Christine Brandes, who had the largest solo part, was of a different order. Her voice was dark and stern, much harder than that of Reutter-Harrah. She sang more operatically, with more open emotional intensity and with frequent elision of potentially difficult phonemes. I’ve heard Brandes sing even more commandingly than this in larger halls than Bing, so doubtlessly she was adjusting her voice for the circumstances. Nevertheless she did not entirely fit in with her colleagues in shared passages.

Tuesday’s little soirée was advertised as if it were a genuine 1790s reception in London, with a period-style handbill for a program. Volunteers read introductions to the music in the personae of various patrons. The music was all chamber works from Haydn’s London period. Some was vocal, including folksong settings brightly sung by Kimberly Johnson.

The big work was Salomon’s arrangement for piano trio – with some extras – of the “Surprise” Symphony, identified on the program, as it would have been at the time, as a “Celebrated Overture.”

As usual with piano-and-strings music then, the piano carried the burden of the work, with the strings mostly for added counterpoint. With Anthony Martin’s violin louder than George Barth’s period-style fortepiano, this got turned upside down. Stephen Harrison of the Ives Quartet played cello.

One extra was the addition of a flauto traverso, played by Greer Ellison, to the finale. Another was having the big “surprise” chord from the slow movement reinforced by a whack on a bass drum in the back of the room. Unexpected wit often crops up in Haydn.