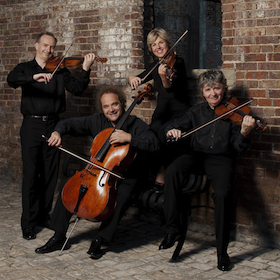 The Takács Quartet came to Bing Concert Hall last weekend to play for Stanford Live all six string quartets by Béla Bartók (1881-1945). It took them two programs to do it, on Saturday evening and Sunday afternoon.

There is no established canon in modern music more intimidating, gnarly, and downright difficult — for players and listeners alike — than the Bartók Quartets. Just one of them is a tough enough dish on a chamber program. To hear all six in one weekend is a true high-fiber diet. At each concert, there was a sizable number of audience members who decided that two Bartók quartets was enough for one day, and who left at intermission before hearing the third.

The established precept in music appreciation is that Bartók’s quartet cycle is organized in an arch structure, like the movements of the Fourth and Fifth Quartets: a relatively accessible late-Romantic work first, a comparatively simple mature work last, and progressively more difficult expressionist works in between, with the cryptic, single-movement Third at the apex.

I do not find them so. Though each quartet has its own language, or at least its own selection of elements from Bartók’s language, I hear them as all existing on a near-equal plane of intellectual and emotional challenge. What makes them sound different from each other, or in different performances, lies entirely in how they are played.

What makes the Takács Quartet an outstanding Bartók ensemble is not only its total commitment to this music, its determination to put the toughest and most uncompromising face on Bartók’s writing, winning the audience over by sheer energy and grit. It’s also the Takács players’ ability to perform as a single entity, breathing and responding to each other as one.

Bartók’s quartets are full of unison multiple-stopped slashing chords, of complex rhythmic motifs for two players together, and of numerous other clever quartet tricks, including a favorite of his, simultaneous glissandi in which two of the players are going up while the other two go down. A set of musicians who can master the art of perfectly coordinating all these tasks is going to give a vivid Bartók.

What makes the Takács Quartet an outstanding Bartók ensemble is not only its total commitment to this music, its determination to put the toughest and most uncompromising face on Bartók’s writing, winning the audience over by sheer energy and grit.

That’s what the Takács Quartet does. Every pairing between them merges into a single entity, though the heart of the ensemble may be the pairing of the middle voices, Károly Schranz on second violin and Geraldine Walther on viola. With cellist András Fejér rumbling beneath, when first violinist Edward Dusinberre brings his distinctly shining sound on top, the grouping is complete. Together they bring coruscating intensity to all the metallic, spooky, bouncy, grinding, or whooshing sounds that Bartók calls for. Fine as the individual solos were, especially Walther’s — in the opening of the Sixth Quartet, her phrasing turned and faded most affectingly — I always awaited the return of the full eight-handed mad machine and whatever strange sounds it would come up with next.

Throughout the concerts, I could hear premonitions of later composers inspired by Bartók – not just the fleeting cries of his Hungarian successor, György Ligeti, but also important string quartets by composers of the following generation: the buzzing and whirring of Giacinto Scelsi and the lonely floating motives and even the wit of Dmitri Shostakovich. In every case, though, Bartók is the rawer, tougher, more primal composer.

Only in the First Quartet did the Takács look backwards — not to German romanticism so much as to Debussy and even to a hint of English pastoralism. In both the First and the Third Quartets, the Takács even managed to make the music occasionally sound fun, though, to be sure, it was hardly always fun. If any of the works suffered from this approach, it was the Fifth Quartet. No more ingratiating than its companions, the Fifth whipped by, offering nothing to latch on to and no humor, save for the one famous “barrel-organ” passage in the finale, which in any case was gone in a moment.

The Sixth Quartet has a reputation as the saddest of the cycle — each of its movements is marked “Mesto” — though in this performance it was lively, even witty in the Burletta third movement, and more soulful than sad, especially in the slow finale, which was more lyrical and consonant than anything else the entire weekend. There was even a moment I could swear I heard a Mozartean chord progression. The Second Quartet took the place of the darkest and most sober work in the set, with hollow folk motifs in the fast second movement, and quiet, affecting solos and contrasting sweet-and-sour chords in the slow finale.

The Fourth Quartet is my favorite of the six, and it showed its quality here with delightful and strange sounds from the distinctly Scelsian first and second movements, through the long cello solo and the birdlike squeaks from viola in the third, slow movement, to the heavy dance of the fifth movement finale. The most awesome single movement all weekend, though, had to be the fourth movement, the second scherzo. This all-pizzicato movement was as strong as the bowing elsewhere in the quartet, cute and bouncy, with lots of strings snapping against the fingerboard — another special Bartók effect. He’s got a million of them.