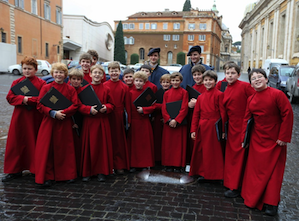 A curious paradox seemed to occur Wednesday at Memorial Church on the Stanford University campus. While the voices and musicality of the Choir of New College Oxford suggested excellence, the program chosen by Director Edward Higginbottom fell flat. In a program of Britten, Bach, and Purcell, the voices of the boy sopranos and their older compatriots in the alto, tenor, and bass sections blended seamlessly and carried such immense clarity and effortlessness as to almost convince me that the concert was an undeniable success. However, while I expected to be transported by this choir — which was founded in the 14th century, giving it enough time to get its act together — programmatic problems left me feeling decidedly earthbound.

At the start of the concert, Stephen M. Sano, director of the Stanford Chamber Chorale (also featured at the concert), announced that Higginbottom had tied the program together using key and text relationships, and requested that the audience was not to applaud until the end of each half of the program. Although this unification roused my intellectual curiosity, the more-dominant theme of the evening was confusion.

This befuddlement began with Higginbottom’s assumption that an audience of American concertgoers would be able to follow a program of primarily sacred music without distinct divisions between pieces. On the surface, the diversity of harmonic language among the three featured composers would be enough to differentiate the pieces from one another. Oddly, though, this was not the case.

The moderate tempos of these works, in combination with the key relationships designed specifically to unite them, seemed to leave the audience perplexed. Without applause to demarcate the end of one work from the beginning of another, the audience became lost, and I witnessed multiple members of the crowd whispering, pointing at their program booklets, and throwing up their hands in bewilderment.

It was dismaying to understand only the final words of each stanza … at times I could not even tell the language being sung.

Perhaps the most obvious moment of confusion occurred in the middle of the first half. After pleasing renditions of Britten’s Hymn to St. Cecilia and Purcell’s Funeral Sentences, Bach’s Toccata in C (BWV 564) sounded out over the church from organist Benjamin Bloor. As the choir filed off stage and proceeded to the organ loft for the latter portion of the first half, the audience clearly believed that the toccata was, in fact, the Choir of New College’s intermission exit music. Raucous and excited applause burst from the front row and rolled backward through the crowd for half a minute. I must say, I found this mighty awkward. While it’s certainly possible to lay the blame at the feet of the concertgoers, it seemed to me that it the true fault arguably rested with a director who did not understand his audience.

My Kingdom for a Printed Text

Another puzzling issue was text. In the beautifully written program notes, the author highlights the similarity between Purcell and Britten’s text-setting techniques. Each composer, the author notes, “seizes upon each phrase, imbuing it with the strongest possible musical coloration.” Considering this emphasis, I found it frustrating that not a single text was provided. Britten’s Rejoice in the Lamb and his Hymn to St. Cecilia both feature wonderful poetry, and it was dismaying to understand only the final words of each stanza. Furthermore, I was surprised that, as a choral singer myself, at times I could not even tell the language being sung. This lack of clarity seemed to result from the resonance of the church as well as the absolutely impeccable line held by the choir at the expense of diction. Had the texts been provided in the program, I am certain that the audience’s confusion would have been greatly diminished.

The sound of the choir was sublime and there were moments of absolutely heart-wrenching beauty.

Despite these issues, it’s important to note that the sound of the choir was sublime and that there were moments of absolutely heart-wrenching beauty. During Haydn’s Beati omnes, the breath caught in my chest as the voices pealed off one another. Higginbottom has the ability to present the texture of a work with such precision that he manages to provide the audience with an almost visual sense of the piece.

However, at the end of the concert, the sparkling treble voices were eclipsed by the audience’s confusion. The puzzlement could have easily been amended by allowing applause and providing texts. Unfortunately, the Choir of New College chose a different route.