Stanford Lively Arts occasionally offers a program way over towards the dark end of music’s emotional spectrum, far more daring than anything other local concert promoters put on. Wednesday’s concert by the Calder Quartet, with pianist Gloria Cheng, was one of these. Only a small audience turned out at Dinkelspiel Auditorium for two hours of unmatched gloom and agony. Sounds horrible, right? Actually it was tremendously cathartic. I left the concert feeling that there was something to live for after all, and that art had shown the way. 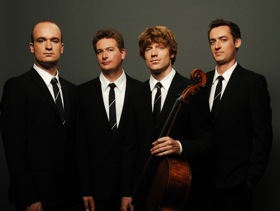 Start with the Calder foursome playing Shostakovich’s Quartet No. 8, alternately described as his self-penned obituary or his suicide note. It’s in five connected movements. This came across as a single, flowing entity, despite dramatic differences in the style given to each movement, a combination of shifting differences within basic coherence appropriate from a performing group named for the artist who invented the mobile sculpture. The opening and closing movements, based particularly heavily on the composer’s personal DSCH motif that permeates the quartet, were quiet, almost blank-faced, with eerie chromatic scales particularly from Eric Byers’ cello. Played this way, they formed a prelude and coda to frame the other movements. Of these, the fast and vicious second was harsh and squawking, with an episode of wailing klezmer, led by Benjamin Jacobson’s first violin. The quizzical scherzo of the third movement was a combination of the harsh and the distantly crusty, with stinging pizzicato notes from Andrew Bulbrook’s second violin, hollow accented notes from Jonathan Moerschel’s viola, and piercing held notes from Byers’ cello. The very slow fourth movement was the heart of the piece, a grinding tragedy. The sudden fortissimo motif that begins the movement literally made members of the audience jump in their seats. Byers earnestly reached for the high notes in his lyrical melody.

The more brutal side of the Shostakovich was preparation and warning for Christopher Rouse’s Quartet No. 3, written for the Calder Quartet two years ago and receiving its first Bay Area performance. Rouse wishes to pack an orchestra’s worth of potential dissonance into his chamber music. His quartet has only a few solo passages, mostly canons being passed around. It’s written largely for the four instruments playing together: drones, massively eruptive tremolos, and lots of falling glissandos. Even most of the rhythmically irregular roiling chaotic passages have the instruments acting together. There are some surprisingly consonant intervals between individual players from time to time, but the context is one of the most painful dissonance. The repeated falling passages resemble that now-antiquated sound, an amplified phonograph needle scraping across the grooves of an LP, or sometimes, when they squawk to an awkward stop, a dentist’s drill.

For all its noise, this work is not nonsensical. Rouse has something substantive to say in this idiom, and he says it all in about 10 minutes. Unfortunately, the piece lasts for 20 minutes. 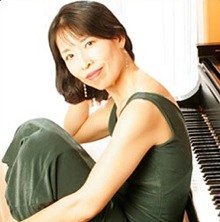 n between these competing visions of hell, Gloria Cheng came on to perform two contrasting items from Shostakovich’s Preludes and Fugues, Op. 87. The Prelude and Fugue No. 7 in A Major is light and sweet, while No. 15 in D-flat Major is heavy and irregular. That contrast was downplayed in the performance. Cheng has such a clear, delicate, and pearl-like pianistic style — every fugal entrance in No. 7 was clearly marked — that there was no way she could make a mess even out of the tumbling overlaps of No. 15’s fugue. If the Calder Quartet likes to get down and dirty with modern music, Cheng is going to make it as clean as possible.

This contrast in styles made the players well-equipped to return after intermission and play the Piano Quintet of Alfred Schnittke, one of the most remarkable works by this great composer from late 20th century Russia. Almost throughout its length, Schnittke’s Quintet is a blend of two contrasting styles: a slow, buzzing dissonance in the strings — quite a relief after Rouse, actually — and a gentle consonant base, varied by almost minimalist repeating notes as background, in the piano. That’s a combination perfectly suited for the styles of the present players. Ranging from vaguely lowering to rough to lyrical, with phrases shaped like gentle breaths, the strings buzzed their way over piano phrases of quiet lyricism or simple rhythmic drive. Nothing went too fast or heavily.

Something of a joint requiem for the composer’s mother and for Shostakovich, the Quintet has some striking resemblances to Shostakovich’s work, particularly his own Piano Quintet for its resigned, almost quizzical air. Like Shostakovich, too, Schnittke uses a musical letter motif, BACH (J.S. Bach was one of Schnittke’s great inspirations), which forms the initial theme of the off-kilter waltz of the second movement.

The final movement was particularly perfect. Over a passacaglia in the piano — a light, simple melody repeated over and over — the strings tried various emotions — wry, energetic, and sweet — before returning at the end to the creepy with which they’d begun. And the piano part, as it had done several times earlier in this stealthy work, died away in the distance, as Cheng pressed down keys without making a sound.

The resemblance to the conclusion of Shostakovich’s Quintet, a shrugging of the composer’s shoulders with a cryptic smile, was particularly marked here. Bulbrook in introducing the work to the audience suggested that this would be an optimistic ending. It was the most cheerful, at any rate, that we were going to get. And in the context, it worked as one.