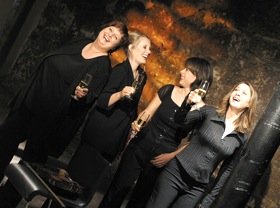 The Vertavo String Quartet, four women from Norway, peered hesitantly around a curtain and stuck a tentative toe into the frigid waters of Stanford’s Dinkelspiel Auditorium.

Not literally. That’s merely what a lot of the music-making at their Stanford Lively Arts recital on Wednesday sounded like. This was a concert of the small pleasures, like finding a single poppy growing in a grassy field in the Stanford hills.

The choice of repertoire had a lot to do with creating that tentative feeling. The concert opened with a gracious Andante and a Minuet by Haydn, the two completed movements from his unfinished final string quartet, published as his Op. 103. This proceeded in a hushed, exploratory manner, as if the composer was expected to keel over at any second, bringing the music to a halt in the middle of a movement.

It was followed by four movements from Janáček’s On an Overgrown Path. This set of short piano pieces are all tiny quiet musings on life. Arranged for string quartet by an uncredited hand, they come across like gentle selections from Dvořák’s Cypresses, albeit with a slightly schizoid character, as Janáček is prone to short bursts of violent energy outdoing Dvořák’s. That was a minimal element, though. Softly, even to the verge of inaudibility, the music treaded its way.

The big work on the program was Beethoven’s Quartet in B-flat, Op. 130, in a different form than the way I heard it on Sunday by the Miró Quartet. After the work’s first performance in 1826, Beethoven was told by everyone he knew that the Grosse Fuge, with which it then ended, was too long and difficult. So he took out the fugue, of which he’d been so proud, and had it published separately, replacing it in Op. 130 with a new and gentler Allegro finale, the last composition he ever wrote. It was an odd capitulation for the irascible composer, who’d spent 30 years defying the heavens and declaring himself beholden to no patron, to give in so meekly to others’ incomprehension of his music. So most performers today, including the Miró Quartet, restore the original version.

Not the Vertavo Quartet. This ensemble holds that Beethoven’s second thoughts were his best, that the Grosse Fuge unbalances the work. So we heard the undramatic replacement finale, played in a quick, cheerful manner that cast its aura retroactively back over the whole work. For Vertavo, the fast movements of Op. 130 are light and small-scale, not heavy or dramatic. The opening movement was tentative throughout, in the manner of the evening’s Haydn and Janáček, never more so than in the development section, and the shifts from Adagio to Allegro came across as if the players were falling into the faster tempo, rather than having it burst out from them. The Danza Tedesca was splendidly seasick in motion, more through an intimation of Beethoven’s irregular dynamic markings than a strict realization of them. The two slower movements put some of the missing weight back into the music. The Vertavo players took the courtly Andante as slowly and sorrowfully as they did the Adagio molto Cavatina, achieving some genuine pathos here and there in both movements.

Beethoven’s other fast movement, his Presto, had a quaint, creaky air to it that seemed to reflect the remaining work on the program, the real highlight of the evening. This was Leyendas: An Andean Walkabout, written ten years ago by the local composer Gabriela Lena Frank. This suite of six movements is Frank’s attempt to imitate the sound of Andean singing, and Andean instruments like panpipes and bamboo flutes, through the medium of the string quartet, and she pulls no punches in doing so. This is not the Muzak version of Peruvian music. Almost the entire work, it seems, is written to be played with light bowing on the bridge of the instrument, producing dry, metallic, spectral sounds, high wailings, and rapid tapping patterns that disintegrate and die away. Strummed pizzicato chords and tappings of the bow on the strings abounded. Long-held notes and ghostly melodies in the quietest possible volume at the very highest tip of the violin’s range sounded spooky and distant. So, despite jagged rhythms and sudden outbursts, the work bore the same air of introspective tentativity as the other works on the program.

This strange and compelling work was riveting in performance. Under Øyvor Volle as a strong first violinist, it showed the Vertavo Quartet at its best. Volle also led the Haydn and Janáček, and exchanged places with Berit Cardas for the Beethoven. Cardas is a less commanding violinist than Volle, and did not take charge of Op. 130 as much as would be ideal. Volle, indeed, took up some of the slack, particularly in the Cavatina, which is something of a dialogue between the first violin and the other three instruments as a group. They’re more than an accompaniment, particularly in this performance. Violist Henninge Landaas was impressively dry and rough in a sliding passage in the Frank; a similar tone color was less of a good sign elsewhere. Cellist Bjørg Værnes Lewis is perhaps the best performer overall; her cello was always solid and tuneful.

The evening opened with a performance by the Bent Spoon Dance Company, a Stanford student modern dance troupe. Subsets of 10 earnest, serious-faced student dancers performed their own choreography, falling to the stage, twisting about, and rising again in patterns of twos and threes, in a visually sensitive match to recordings of alternative-rock and folk-pop songs.