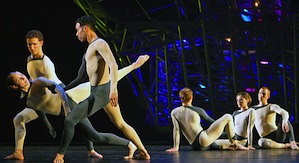 Back in 1984, the Merce Cunningham Dance Company premiered a work called Pictures at the City Center in New York. What struck me that night was its familial quality, unmistakable despite Cunningham’s uncompromising style and system. Here you had music that had nothing to do with the dancing, whose order had been determined by chance methods, deliberately militaing against an emotional arc. And yet, in the clusters of dancers, in the trusting and caring ways they handled each other as well as the choreography itself, and the cool yet intimate lighting, there arose a sense of story. In fact, trying to remember the title, I mistakenly searched for Family Pictures.

All of which is a way of saying that Merce Cunningham’s final work, Nearly 90 (Squared) is a lot like that, and it makes for an apt and moving farewell to the company Cunningham created. That’s not readily achievable given the the harsh score composed by John Paul Jones and Takehisa Kosugi (“I didn’t know a cat could be vacuumed for that long,” a friend commented Tuesday at the end of the piece) or the expectations of avant-gardism, or even plotless dance (“There are no mothers-in-law in ballet,” Balanchine is said to have said). It speaks to the undeniable closeness of the company, its devotion to Cunningham’s spirit and work, the ability of each dancer to express the choreography to its fullest extent, and the unimpeachable humanity of dance (like all art, only more so). 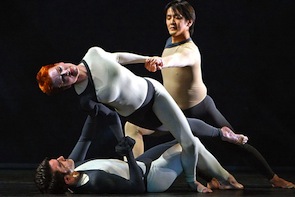 The piece, more than 80 minutes long (nearly 90, Cunningham’s age at his death on July 26, 2009), was presented Tuesday night at Stanford University’s Memorial Auditorium as the troupe’s final Bay Area appearance before disbanding, per its founder’s decree, at year’s end. (Full disclosure: I wrote a feature for the show’s program book before signing on with SFCV.)

Nearly 90 (Squared) was created in 2009 as a built-to-tour version of that year’s earlier Nearly 90, with modified music, amazing lighting in place of an unlovable, unwieldy set, and new costumes. It’s for 13 dancers, but its wonderfully varied journey most frequently showcases little ensembles, duos or more often trios, plus a few larger groups in engrossingly fluid fashion. The dancers arrive, leave, return, interact, and recombine with split-second timing, and they seem tireless. Two trios might share the stage, or a trio might get buzzed by one darting dancer, like an inquisitive bee. Sometimes a soloist or a duo appears. Sometimes, the groups unite in one move; for instance, all the dancers bring their hands before them and bow their heads, and given the occasion it seems mournful. But more often, what’s on view is bright, challenging and engaging.

Say you’re a dancer. How many ways are there to balance on one foot while your arms are going elsewhere, your body angled away from center? Many, and — if someone’s got your back or, maybe, your arm, or one steadying hand on your collarbone — many more. If you’re in arabesque, someone’s there to help you turn. When you jump, where are you off to? How will you return? Or will you? Maybe you’ll move into a line and melt into the wings. Or maybe you’ll trot, or lunge. Maybe you’ll somehow end up on your partner’s shoulders, watching another couple. Your next jumps as a foursome, perhaps, might be unbelievably springy, impossible variations on ballet’s assemblés. Or there might be streams of little two-footed turns.

Two women cross their hands and move upward as if describing birds in flight. A wild-looking man picks up another man like he’s a plank. Nearly Ninety Squared? Would that make nearly 90 million different steps and astonishments? And then there are moments of stillness, angles of repose. Andrea Weber takes on the magnificence of a goddess — one with superhumanly steady balance.