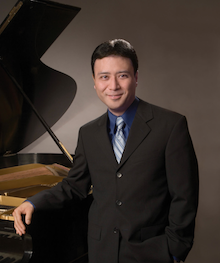 Ever since he emerged from the chrysalis of teaching German at a Catholic high school in Mountain View and became the butterfly who won the Van Cliburn competition 16 years ago, pianist Jon Nakamatsu has been a local favorite in the South Bay. For an active touring performer, he plays a good deal locally. “It’s great to be at home,” he told the audience at his recital Sunday at the California Theatre in San José, presented by the Steinway Society of the Bay Area.

Most of Nakamatsu’s local appearances that I hear are concertos, often with small-scale local ensembles. This recital was an interesting opportunity to hear how he would shape and express music without the restrictions of an accompanying orchestra.

Half the program consisted of Robert Schumann’s suite Carnaval. It was the other half of the program, however, with music by Schubert and Chopin, that more clearly evoked Schumann’s dual personalities. In Nakamatsu’s playing of two Impromptus from Schubert’s Op. 90, the Andante No. 3 in G flat had the persona of Schumann’s introspective and imaginary figure Eusebius, while the Allegro No. 2 in E flat expressed that of the public, impetuous Florestan. Nakamatsu played No. 3 with a gentle touch and an even stress, conveying the music’s emotion with a boatload of rubato, far more than he applied to any other work on the program. No. 2 was more of a bouncy roller coaster ride. Unsurprisingly in this context, he concluded No. 2 by accelerating into a stretto, while No. 3 slowly drifted to a quiet halt.

This recital was an interesting opportunity to hear how he would shape and express music without the restrictions of an accompanying orchestra.

Chopin’s Piano Sonata No. 3, Op. 58, is the real classical-form sonata among his mature compositions; the perhaps better-known No. 2 is more of a suite of separate pieces. Chopin having given serious thought to sonata form, it’s fitting that Nakamatsu gave similarly deep consideration to how he might express that structure, and again his use of contrasts evoked a meeting of Eusebius and Florestan.

The opening Allegro began with utmost clarity and formality, with particular evenness to the motto falling figure. This was extroverted enough to be Florestanish, especially when contrasted with the gentle Eusebian caressing that Nakamatsu applied to the quintessentially Chopinesque second and closing themes. In the brief Scherzo, a similarly and unusually marked gentleness to the trio section created a kindred contrast.

The Largo was, almost inevitably, entirely Eusebian: one enormous batch of lyricism that seemed to stretch across an entire landscape. It just wasn’t as caressing as the dulcet sections of the first movement.

Chopin’s finale, after a vividly rising introduction, carried on with a notably tentative, hushed rendition of the opening theme, becoming stronger on its subsequent appearances, drawing energy from the livelier intervening contrasting sections, and concluding almost maestoso in its grandeur before a faster burst took over in the coda. Florestan would have been pleased.

Overall shifts of mood over the course of each piece are what kept them interesting.

Schumann’s Carnaval teems with sudden jumpy moments on a short, immediate level and abrupt contrasts on a larger one. Nakamatsu’s approach was to smooth out those jerks and jumps and to substitute for the abrupt changes between the constituent pieces a large-scale evolution of inflection within them. To a large degree, he elided over the breaks between pieces, the only exception being a cessation at the end of “A.S.C.H.-S.C.H.A.” so sudden as to generate audience laughter. The sudden emphases in “Pierrot” and “Arlequin,” which many pianists jump on with vehement glee, were hushed down by Nakamatsu. He took a broader perspective. Overall shifts of mood over the course of each piece are what kept them interesting. A similar approach could be heard in a relaxation of the drive in the middle section of “Reconnaissance,” and in “Pantalon et Colombine,” which gradually kept getting faster until it suddenly puttered down at the end.

Nakamatsu is known to be generous with his encores at recitals. We got two of them (he’s been known to perform three), both by Chopin, and both again expressing his principle of contrast. The Polonaise in A Flat, Op. 53, ran in the direction that the Schumann had run away from. It became a suite of tiny contrasting pieces run together, from an almost comically folksy opening rendition of the main theme to one interlude evoking a train rumbling away in the distance at night. The Fantaisie-Impromptu, Op. 66, needs no performer’s elaboration to present itself as an anthology of whizzing virtuosity and the most charming of melodies.