The current Festival del Sole in the Napa Valley took a stellar leap forward Saturday evening with both the talent it featured and the place in which that talent was showcased. The ever-impressive countertenor David Daniels, the dazzling young soprano Danielle de Niese, and the redoubtable Philharmonia Baroque Orchestra with Nicholas McGegan were the talent, while the imposing new Castello di Amorosa. a winery-cum-castle set amid the hills and vineyards of the upper Napa Valley near Calistoga, was the monumental site. It was a concert to be savored and long remembered. 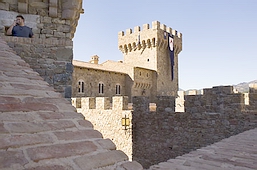 The focus of the program was selections from Handel's 1725 opera, Giulio Cesare, with Daniels as the invading emperor in Egypt. Daniels, now in the 15th year of his career, seems at the peak of his considerable vocal powers, his soprano-high voice still arresting and luminous. The opening aria describing Caesar hunting his enemies (like a huntsman after prey, "Va tacito e nascosto") was exhilarating in its delivery and detail, each repeat of the verse given a slightly different emphasis. One of the beauties of singing with the Philharmonia Baroque Orchestra is being accompanied by period instruments, and R.J. Kelley's playing of his valveless hunting horn, designed in 1720, gave Handel's musical metaphor both authenticity and charm.

Daniels later deepened his character with a wrathful delivery of "Empio, diró, tu sei" (I say you are a villain), as McGegan directed the opening string figures with considerable slash and bite. Daniels' passagework was dazzling, his dark, descending melisma quick and incisive, his ascending runs thrilling, and his prepared trills elegantly placed and imperious.

In contrast was Caesar's lament over his near-defeat, "Aure, deh, per pietà." Calling upon the Egyptian breezes to give him comfort. Daniels began with an incredibly prolonged messa di voce, the voice softly placed, swelling in volume, and then diminishing, all in one elegant sigh, the effect stunning and dramatic. And being the complete artist that he is, Daniels gave each of the many repeats of dolor a slightly different mournful stress.
Hail the Queen
But what would an imperial Caesar be without an impetuous Cleopatra? That was the essence of Danielle de Niese's vigorous characterization of this teasing Queen of the Nile. Cleopatra's opening advice to her despairing brother over her seizure of the throne, "Non disperar" (Do not despair), was charming and witty, as de Niese easily tossed off the considerable runs and trills, separating each note in razor-sharp staccatos.

Where Daniels is an interior singer, bringing his audience to him in an understated, controlled manner, de Niese in contrast is an emphatic, physical force. She uses her considerable beauty, large eyes, and flashing smile to win over her listeners. She is also a singer of considerable achievement, bringing pity and pathos to her "Piangeró la sorte mia" (I shall weep for my fate) when Caesar takes her prisoner, and delivering its long-limbed legato with great feeling and dignity. She was well-accompanied by the haunting sounds of Stephen Schultz' 1745-designed flute.

But Cleopatra is nothing if not quixotic, and de Niese gave her young queen an effortless delivery of "Da tempeste il legno infranto," advising Caesar that despite his political tempests ("When broken by storms, ships can come into safe harbor"), they could rule together. This is another of Handel's musical metaphors, and de Niese took full advantage of the aria's tempestuous repeats, executing its gales of ascending and descending scales with breathtaking mastery, as McGegan remained in powerful control of the stormy accompaniment.

What the attentive audience longed for, of course, was for these two artists and their colorful characters to sing together. And they were not disappointed when Daniels and de Niese combined their voices, his high and hers lower, for their endearing "Caro/Bella," both sharing incredibly timed prepared trills.

The finale was met with such cheers that the couple returned for "Il t'abbraccio" from Handel's Rodelinda and the final duet from Monteverdi's Il Coronazione di Poppea, both delivered in high style.

What added to the occasion was the audience seated at sunset in the courtyard of this 120,000-square-foot, recently built medieval castle, complete with turrets and towers. (Eclectic wineries are not new to the Napa Valley, for nearby Sterling Vineyards is built in the style of a Greek monastery, Clos Pegase like the red palace of Knossos, and Darioush a Babylonian fantasy.) But this endeavor that took $30 million and 14 years to complete, with its fine natural acoustics, will become, it was announced, one of the festival's major sites. It certainly gave a celebratory feel to this highly charged event.