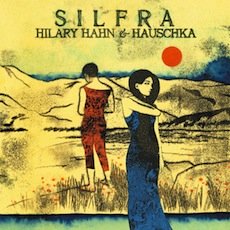 As celebrated and compelling as Hilary Hahn’s delivery of the classical violin repertoire has been, she’s ever eager to decorate her laurels with exotic flora. For this outing, an atypical detour for Deutsche Grammophon, Hahn teamed up with German prepared piano master Volker Bertelmann, who goes by the moniker Hauschka, at the Greenhouse Studios in Reykjavik, Iceland.

Attempting to follow them, I found myself seeking guidance from outside the album’s dozen curious tracks, which I found tough going in places. So I read the liner notes prepared by the pair of musicians, and I sought among the YouTube videos through which Hahn is accustomed to providing additional insights into her musical world. I even did some abridged research on the environment of Iceland and on historical Icelandic folk music and instrumentation.

Although Hahn’s and Hauschka’s comments make no reference to folk music, they do cite the setting of their project as significant, referring to Iceland as “an environment in which artists are encouraged to follow their creative instincts.” Silfra, named for the geological meeting place near Reykjavik of the Eurasian and North American tectonic plates, does evoke a tangible iciness and a presence both lonely and majestic. But all those liner notes and videos left me with the impression that maybe I would have to have been there, blown by icy winds and volcanic ash, and present for the self-declared magnetic interplay between the musicians, to begin to get what was inspiring them, and why they did with it what they did.

Unlike Hahn’s ongoing Encores project, this material is not compositional, and it’s up to you to assess the value of the improvisation as innovative, pretentious, childlike, awkward, inspired, constrictive, or any or all of the above. Some of Hauschka’s dressing out of his piano with hardware, duct tape, marbles, rubber balls, and the like seems superfluous and gimmicky, some of it acoustically interesting. His and Hahn’s melodic palates are generally narrow, and their tendency towards repeated percussive patterns suggests post-modern minimalism. On a few tracks, like Krakow, Draw a Map, and Ashes, the pair seems to remember a more traditional dialogue, but to not go very far with it. The overall arc of most pieces is elusive, and often unresolved, if spontaneous.

Both players’ technical skill is apparent. Hauschka’s attack is strong and confident, and he is well-matched by Hahn’s emotionally credible physicality. Elsewhere, the violinist crystallizes lovely high tones in melodic passages evocative, whether or not intentionally, of the spare melancholy of Icelandic and Scandinavian folk tunes. Credit Icelandic engineer, producer, and composer Valgeir Sigurõsson for meeting the project’s recording challenges, which included Hahn’s positioning her muted violin next to a window (on Sink). You sense that this all was a rewarding expedition for the restless Hahn, but not all of us will see what she saw.