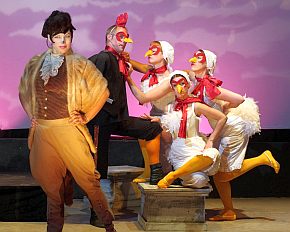 The program opened with L'Histoire du Soldat (The soldier's tale), Stravinsky's and Swiss writer Charles-Ferdinand Ramuz' retelling of the Faust legend. The work tells the story of a soldier who, on leave from the front, encounters the devil, who convinces the soldier to trade in his beloved violin for a magical book. The soldier agrees and, using the book, earns great wealth. The fortune, though, causes only torment. The soldier eventually wins back his fiddle from the devil and, with it, a beautiful princess. As soon as the soldier attempts to return home with his bride, though, the devil regains power over him. This twist leads to the moral, laid out in the Great Chorale: "You must not seek to add to what you have," for "No one can have it all."

The Oakland Opera production replaces Ramuz' French libretto with a new English-language one by British playwright Rebecca Lenkewicz, whose version updates Histoire to the present. The soldier, an American GI by the name of Joe, is en route back to his hometown from the Iraqi battlefield, and the devil first appears to Joe not as an old man, but rather a smarmy street hustler.
Update in Iraq
A press release on the Opera's Web site describes Lenkewicz' Iraq War setting as offering a "fresh look at the deserting soldier and his easy way out of what appears to be a senseless war." In pursuing this modern update, though, the producers slightly change the moral. Early in the production, we see Joe strapped to a chair, blindfolded, and held against his will in a scene strongly reminiscent of a hostage tape broadcast on CNN. Throughout, Joe is depicted as being more a victim of raw physical force than of the devil's cunning and his own greed, as in Ramuz' original.

The three principals — Ben Jones as Joe the soldier, Matthias Bossi as the devil, and, most notably, local spoken-word artist Kirya Traber as the narrator — were all excellent. On the whole, the ensemble turned in a good reading of Stravinsky's difficult score. Graeme Jennings was wonderful in his performance of the violin solos.

Yet the evening's real treat was the second-half performance of Renard, Stravinsky's barnyard burlesque for singers, small orchestra, and stage performers. Originally entitled Baika pro lisu, petukha, kota da barana (Fable about the fox, rooster, cat, and ram — the latter changed to "goat" for later foreign translations), the piece draws on folk texts by Afanas'yev, which Stravinsky arranged into the libretto. 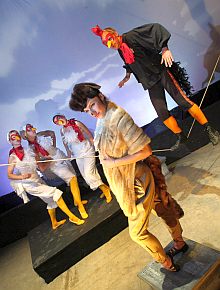 Just some of the barnyard acrobatics in Renard

As he did with Histoire, Stravinsky composed Renard during his wartime exile in Switzerland, on commission from the Princess de Polignac. He completed the score in 1916. Even more than Histoire, Stravinsky's Renard captures his artistic aspirations during this Swiss period, namely his quest for what his biographer Stephen Walsh terms an "idealized folk modernism."
Bring On the Acrobats
To capture this folkloric style, Renard calls for cimbalom (dulcimer) — replicated on the open strings of the piano by the Oakland Opera's pianist Skye Atman — to evoke the sounds of the traditional Russian gusli. Stravinsky's preface to the score states that Renard is "to be played by [a troupe of] clowns, dancers, or acrobats."

The Oakland Opera's production perfectly captures this carnivalesque exuberance. During the introductory march, the full troupe of acrobats and dancers came springing down the center aisle of the Metro Operahouse, somersaulting onto the stage in flashes of color and light. Dressed as the barnyard animals of Stravinsky's score, the performers charmed the audience with a wide variety of acrobatic feats, from knife juggling to tightrope walking, all beautifully choreographed. 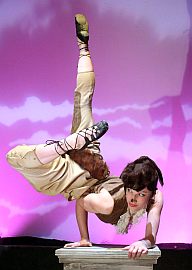 Breonna Noack as the Lady Fox

David Hunt did an excellent job as the Rooster, as did Erin Schrader and Jodi Power as the Cat and Goat, respectively. The highlight for me, though, was Breonna Noack's performance as the Lady Fox. In one particularly memorable sequence, Noack mesmerized the audience with a gorgeous aerial dance performed on a ribbon of red cloth draped from the ceiling. 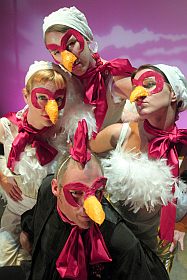 The Oakland Opera is a local gem, and its production of Renard alone makes the concert very much worth seeing. Histoire and Renard run at the Oakland Metro Operahouse through November 2.