The primary strength of some string quartets lies in transparency, in making what they play sound as though it could only go this way. Others insist on making you aware that theirs is a point of view, that there is a medium as well as a message. It is an approach to quartet playing that has, of course, the potential to become uniquely irritating: A quartet with no identifiable point of view can't grate on you half so annoyingly as one that has a strong point of view you actively dislike and that won't let you forget it for a microsecond. 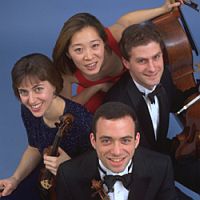 But if you can stand having your preconceptions violently rearranged, there’s nothing quite like hearing music you know well tackled by an ensemble bent on comprehensively rethinking everything. That the Princeton University-based Brentano String Quartet is one of that kind, we know from past Bay Area visits. Wednesday's recital at Herbst Theatre (the ensemble's San Francisco Performances debut) found the Brentanos once again bringing their particular brand of introverted intensity to bear on music both old and new.

Among the works the quartet has brought on this current tour (though not to Wednesday's recital) are transcriptions of Monteverdi madrigals by first violinist Mark Steinberg. The very idea suggests the direction in which the players' thought is tending now: toward something like a vocal-consort sound, with every line, all the time, bearing meaning. Certainly something like that sound-ideal hovered behind the performances of the two older works on Wednesday's program.

Mendelssohn's F-Minor Quartet was his last substantial composition, written after the crushing news of his sister Fanny's death, and only months before his own. It is anguished music — grim in the manner of Beethoven's quartet in the same key, but without that work's ruthless concision. Where Beethoven pares down, Mendelssohn breaks out. Some stretches seem like outpourings of raw rage. It's the only mature Mendelssohn composition I know in which something gets the better of his instinctive sense of proportion.

Much of the piece bristles with sharp, spitting bowstrokes, and that's the sound that tends to dominate good performances. (I mean by "good performances" those that take the work's maddened grief seriously — I've heard a few that attempted, grotesquely, to treat the fury almost as a species of Mendelssohnian scherzando.) The danger is that the atmosphere of hysteria that is always at the surface of the work can come to overwhelm everything else in it, so that the piece devolves into an unrelieved half-hour of crazed hectoring.

By no means did the Brentano Quartet slight the work's violent energy, but for most of the performance it emphasized the music's darkness rather than its bitterness. The blistering sixteenth notes of the first movement were under tight control, seething yet not slashing. The hemiola-laced Scherzo was likewise held in a firm grip, the more menacing for its taut purposefulness.

Still, it was clear that for the Brentanos the core of the piece was to be found elsewhere. The Scherzo's gaunt trio, with violist Misha Amory and cellist Nina Maria Lee moving in sepulchral octaves beneath the subdued keening of the violins, was bleak and yet strong as I have never heard it. And the slow movement was a seamless skein of sorrowing melody — rich, dark-toned, sustained with anguished concentration.

The effect was one of an overwhelming emotion controlled — barely — at an immense cost. And when the control finally snapped, toward the end of the finale, you knew it, too; Steinberg's ever-more-frantic first violin line went, irretrievably, from "still on top of it" to "outright unhinged."
Full-throated Playing
If the Brentanos dug out a vein of dark lyricism in the Mendelssohn, in Beethoven's Op. 127 no digging was needed. In their hands, Beethoven's most single-mindedly lyrical quartet seemed almost as extreme an experiment, in its way, as the variegated cosmos of Op. 131 or the severe logic of the Grosse Fuge. Every voice sang ceaselessly; the counterpoint of the first movement was alive everywhere, no voice predominating, all joins dovetailed.

The colors were rich, glowing, but subdued. Steinberg set the tone, avoiding the upper strings and the E string in particular. (The first movement's Allegro theme was begun way up on the D string, the last movement's on the G string.) Apart from the Scherzo's unruly trio, where second violinist Serena Canin came brashly into her own, everything was sumptuously dark-hued.

The quartet did its utmost, too, to minimize breaks in the music's continuity, subsuming short phrases into longer and yet longer ones. In the finale the players pushed this process perhaps further than it could safely go. Steinberg lingered on the theme's unexpected A-natural in a way that disguised the phrase's square construction, and the succession of little four-bar units that makes up much of the movement was funneled together into a seamless stream. It was marvelous playing, but I'm not sure it didn't miss the point.

In the second-movement variations, though, that same sustained continuity was put to breathtaking use. And the finale was crowned by a coda that seemed to belong to another world — dreamlike, blissfully remote, shot through with rare, fluting colors.
Spicy Quixotic Pieces
In between the Mendelssohn and the Beethoven came Gabriela Lena Frank's 2007 Quijotadas, commissioned for the Brentanos by Music Accord Inc. (a consortium of presenters of which San Francisco Performances is a member) and receiving its first performances on this tour. (We lucked out, as it happens: A couple of days earlier, up in Oregon, the Brentanos had to pull the piece from a program due to Misha Amory's having injured his hand. It must have been a slight injury, because he sounded his old, magnificent self at Herbst.)

Frank, who was present Wednesday night, is a Bay Area native, but this was my first experience of her music. It won't be my last: Quijotadas was entirely delightful.

Its five brief movements take their inspiration from Cervantes' tale of Don Quixote, suggesting though not (I think) drawing literally on Spanish folk music. They are colorful, sharply drawn vignettes, rhythmically pungent and spiced with stinging little dissonances. The first, for the two violins alone, has the melodic confidence and the metrical quirkiness of one of the Bartók duos. Later come bravura moments for the cello (Lee sailed through movement III's double-stopped intricacies) and the viola (in IV, a wandering rhapsody against an eerie tone-cluster-laden backdrop). V ends with another bright-edged violin tune.

Frank's textures were engaging, frequently recalling Bartók, though full of characterful conceits of her own. A passage in movement IV stood out for me, when the widely separated first violin and cello mirror each other with a bizarrely snaking legato line that comes to take over the rest of the texture between them. Other striking details are the funky pizzicato beginning of movement II and the nagging violin lines in minor seconds that occasionally tease the piece's protagonist.

In all this the Brentanos played with a crisp force that had been deliberately underemphasized in the rest of the program. Especially impressive was the unanimity and the confident rhythmic swagger of the bowing; when the players chose to pare down their vibrato, as they did frequently, the sound was almost that of a fiddle band.