Although regional opera companies fulfill an important role in the American musical landscape, too often their limited resources and ambition cause them to cut corners and deliver cheap, amateurish productions. This is especially true of companies that try to mount reduced versions of monumental grand operas. Tosca with a student string quintet, a chorus without tenors, an 80-year-old Tosca who also founded the company, an audience of fawning voice teachers in 1980s attired in pastel pantsuits — none of these is Tosca, at least not the opera that Puccini wrote. 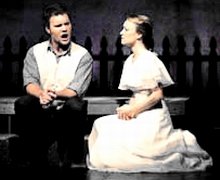 That’s why Trinity Lyric Opera’s production of Aaron Copland’s The Tender Land in Castro Valley on July 14 was such a heartening development. In short, they nailed it. Every aspect of the production, the second offering of this young company, was professional. Trinity chose a piece suitable to its limited resources, paid a 34-piece orchestra of A- and B-list professional freelancers, and enforced rigorous standards in all aspects of its production.

Chief credit goes to Alan Thayer, the producer and driving (and presumably also financial) force behind TLO, and to John Kendall Bailey, an enterprising young conductor who is also a talented vocal bass. Bailey’s work as a singer undoubtedly allowed him to attract a stronger cast of his singer comrades than the company’s budget would otherwise allow. None of the principal singers (Valentina Osinski, Marnie Breckenridge, Brian Leerhuber, Wesley Rogers, and Kirk Eichelberger) would have been out of place in any large-budget opera house in this country.

Most impressive was true bass Kirk Eichelberger, portraying Grandpa Moss. He possesses a truly magnificent instrument and fit the role to a T; his career should go far. Also notable was baritone Brian Leerhuber’s acting. He tackled the role of Top, a hobo stock character given crude and cheap jokes by librettist Horace Everett Leerhuber. I was less impressed with tenor Wesley Rogers, who struggled with his upper notes and did not possess the heft that Copland’s score demands. I have heard Rogers perform wonderfully with the American Bach Soloists in an entirely different genre, so I prefer to fault Copland’s often-gratuitous tenor writing.
Corn as High as a Tenor’s Eye
The Tender Land itself can perhaps be described as Oklahoma! for snobs. Such a work demands traditional production values, and TLO’s sets, costumes, and staging could have been recycled from that almost contemporaneous musical theater work. One of the ironies in American musical history is that much of what we hear as “Western” music was developed from the compositional techniques of a gay Jew from Brooklyn. 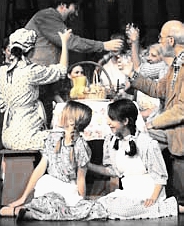 Scene from The Tender Land

Copland was an excellent craftsman, and his operatic writing plays to this strength better than his more-familiar symphonic works do. I found the libretto more cornball and full of cruel colloquialisms. Kudos to the singers and conductor for smoothing out the diction. I did not cringe at a single American r.

TLO’s program listed a significant grant from the Alameda County Arts Commission. After one similarly well-performed opera last year (Vaughan Williams’ Pilgrim’s Progress), the commission had seen enough to take a chance on an ambitious but capable organization. What a sad comparison is San Francisco, where the director of the Grants for the Arts/San Francisco Hotel Tax Fund (which provides up to 15 percent of the budgets of most San Francisco-based arts groups over long time spans) has told me it will not fund groups unless they’ve applied for more than five consecutive years (after becoming eligible by offering two seasons of programming), and rarely do so even then. Such a situation only prevents San Francisco audiences from hearing more work by ambitious young artists.

The Tender Land was the first event of any significance at the new performing arts center in Castro Valley, TLO having moved from the overpriced Dean Lesher Center in Walnut Creek. Architecturally, the 516-seat theater, which is located on the grounds of the local high school, is undistinguished, though it does not look cheap. The intimate space has a wide stage but little fly space, so it should prove ideal for dance companies. Unlike the pits in many new halls, its pit is not too deep.

Although this hall is a welcome addition to the Bay Area art scene, I question its location. It is a good 20-minute hike along a street with no streetlights and intermittent sidewalks from the Castro Valley BART station, and far away from a commercial district. There was not even a pedestrian entrance. I am sure county planners and civic leaders could have found a more accessible location across the street from the BART station or downtown (if Castro Valley has a downtown).

Trinity Lyric Opera is planning its next season. It has already evidenced a commitment to artistic integrity. I look forward to seeing what delights it has in store.