San Francisco Opera has described this as “A Season of Glamour,” and that boast was certainly fulfilled with the company's new and exuberant production of Puccini’s La Rondine. It was long overdue, the last having been in the War Memorial Opera House House in 1934, with Lucrezia Bori and Dino Borgioli in the leading roles and S.F. Opera founder Gaetano Merola conducting.

In the new production, seen this past Wednesday, the Romanian soprano Angela Gheorghiu made her much publicized SFO debut. Gheorghiu is a fascinating artist: Your eye never leaves her. As the heroine, Magda, she is frequently in motion, rarely in repose, slithering and snaking, posturing and pouting. Gheorghiu's rendering of “Chi il bel sogno di Doretta” (Doretta's song), surely one of Puccini’s most popular melodies, was nothing if not a star turn, played directly to the audience.
A Change of Heart
But then near the end of Act 2, Gheorghiu suggests that what she has given thus far has been a pose: That the eponymous rondine (or swallow), a kept woman who often flies from one rich man’s nest to another, has suddenly met the fellow of her dreams, and is transformed. It was here that Gheorghiu let the shallowness of her character fall away and emotionally engaged us with one of Puccini’s most melancholic passages, “Vedi, ho paura!” (You see, I am afraid!).

While her voice seemed not an especially large nor distinctive one, the soprano did physically make her character tender and vulnerable in Act 3, when Magda, in another turn of conscience, refused her lover’s offer of marriage. And she made her subsequent leave-taking in “Io riprendo il mio volo e la mia pena” (I resume my flight and my suffering) not only logical but affecting by dramatically holding the spotlight as the stage went dark. It was not exactly on Puccini’s ravishing high note, but it was theatrical, nevertheless. 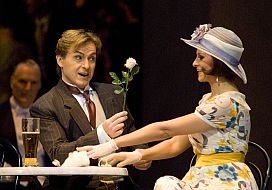 Gheorghiu was emotionally if not vocally matched by tenor Misha Didyk as Ruggero, her young lover. Didyk’s shy, self-effacing manner played well against Gheorghiu’s more aggressive character, but his open-throated vocalizing too often resulted in a flutter that weighted the ardor of Puccini’s soaring lines. However, he sang forcefully and well in the opera’s closing scenes.

San Francisco Opera veteran Philip Skinner gave another of his suave, polished performances as Rambaldo, the aged gentleman who holds the gold, if not the keys to Magda’s heart.
La Rondine's Journey
La Rondine was initially designed as an operetta for Vienna, until World War I interfered and Puccini was forced to re-form his work as an Italian opera. Operetta plots often contrast two couples, one of the higher class, the other of the lower; the first wise, the second foolish. That is the function of the foppish poet Prunier, sung with comic condescension by tenor Gerard Powers, and his secret love, soprano Anna Christy as Lisette, Magda’s maid. Their duet “Tu sapessi a quale prezzo ti disprezzo!” (If you only knew at what price I scorn you!) was one of the highlights of the evening.

Magda’s female companions were drolly sung by Melody Moore as Bianca, Rhoslyn Jones as Yvette, and Katherine Tier as Suzy. Adler Fellow Ji Young Yang beautifully sang the offstage greeting to dawn (“Nella trepida luce d’un mattin”). Puccini frequently composed at night, then met the dawn with exultation, a moment he includes in each of his operas. This one is particularly poignant.

The composer also admired Franz Lehár, the two becoming close friends, and that esteem is heard in this score’s many Lehár-esque waltzes. Maestro Ion Marin seemed to revel in such moments, leading the members of the San Francisco Opera Orchestra for the requisite lilt and lift as well as the grand hesitations and sonorous climaxes. Likewise the members of the San Francisco Opera Chorus, under the direction of Ian Robertson, gave much spirit and good cheer to their roles as Parisian students and lovers. And the tricky-rhythm quartet for the principals, with its wayward dissonant chorus in the ballroom scene in “É il mio sogno che s’avvera!” (It is my dream coming true!), earned well-deserved applause.
Hello, Gorgeous!
This is a sumptuous show, as well-staged as it is well-performed. Nicolas Joël's stylish production is from the Théâtre du Capitole de Toulouse and the Royal Opera, Covent Garden. The period settings by Ezio Frigerio feature an art-deco salon emblazoned with golden, Klimt-like murals for Act 1, and an eye-catching glass atrium overgrown with Tiffany-inspired vines of azure, emerald, and sapphire for Act 3. The Puccini-era costumes are by Franca Squarciapino, and the bobbed hairstyles by Gerd Mairandres. Director Stephen Barlow added many comic touches, and solved Puccini’s problematic ending, with Rambaldo making a final, silent appearance, presumably to take Magda back to Paris.

A suggestion: Take in, if you can, the fervent preperformance talk by Stanford University Professor Giancarlo Aquilanti, who encourages his listeners to enjoy not only this score's many felicities, but to appreciate it as a work far more advanced than Puccini is given credit for.