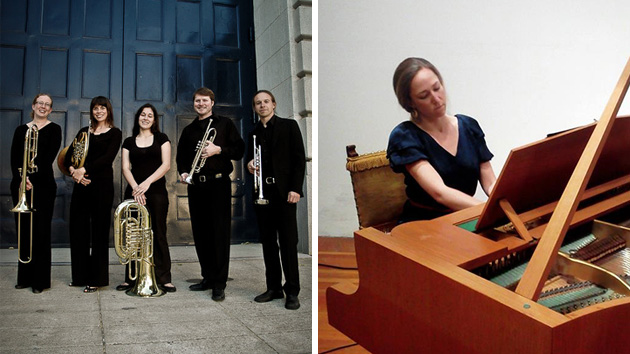 Switchboard is nowadays a San Francisco fixture, with their distinctive marathon-length annual “new music” festival – this year marking its eighth iteration April 4. Spearheaded by Ryan Brown, Jeff Anderle, and Annie Phillips, the organization also puts on monthly presentations at the Tenderloin’s Center for New Music, highlighting festival artists from years past, as well as other acts sharing their genre-blurring mission.

The latest “Switchboard Presents” program, the evening of March 13, was a bill split between electroacoustic music: piano curated by composer/director George Hurd and performed by Elyse Weakley, and two ensembles of the copper-zinc alloy persuasion: the Tamalpais Brass and Sisu BrassLand – both featuring chiefly new music, with several world premieres adding luster to an already enticing offering.

For the first half of the show, Weakley and Hurd’s set explored a few different ways to integrate acoustic and electronic media, as demonstrated by a selection of recent compositions from composers more-or-less in their mid-30s.

The set opened in a most convincing way with London-born, Grammy-nominated composer Anna Clyne’s On Track. Fixed media featuring sources as disparate as a speech from Queen Elizabeth II and electronically manipulated harp melodies shadowed Weakley’s live piano playing relentlessly, yielding a kind of mercurial heterophony between the two elements. Eventually the pianist abandoned the keyboard to access the more blurred sonorities of clusters and strings stroked directly by hand before returning to the opening moto perpetuo and bringing the piece to a rounded close.

Next, a strictly acoustic composition by Richard David James–-better known for his electronic music under the name Aphex Twin—provided a kind of meta-dimension to the program. His cryptically titled petiatil cx htdui unfolded as a graceful miniature, somewhat reminiscent of Arvo Pärt’s small-scale works for piano, and ended at the exact moment I had begun to wonder whether it could sustain my attention for much longer.

The world premiere of Hurd’s own composition, Vivarium, adopted a more complex scale, and delved deeper into the possibilities afforded by the interplay of acoustic and electronic sound.

Inspired by the composer’s musings on the effect of social media and the progressive, voluntary erosion of privacy in which we participate, Vivarium started and ended with brooding, ominous chords in the instrument’s lowest register. From there arose music that was rhythmically decisive, as the piano seemed to alternatively arise from and succumb to waves of mostly concrete sounds, often edited beyond the point of immediate recognition. As with Clyne’s piece earlier, a return to the opening material framed Vivarium with a clear, formal structure, highlighting the music’s own emotional arc.

The first half concluded with a spirited interpretation of Mason Bates’ White Lies for Lomax, a piece that celebrates the legacy of the pioneering U.S. ethnomusicologist by quoting and evoking a wide range of bluesy idioms. There are no actual tunes to be found in White Lies (therefore justifying the title, I presume), but instead, mainly gestures, allusions, and hints.

By contrast, the second half of the evening was strictly analog. Two brass groups took the stage in succession, each demonstrating colorful blending, unwavering intonation, and brilliant ensemble balance.

The final act of the night, eight-piece brass band Sisu BrassLand, took most of their cues from bandleader and composer Aaron Priskorn. Drawing from his own heritage, he christened the group with a Suomi (Finnish) word that loosely translates to tenacity, equanimity, and hardiness. There is, however, a distinct element of fun common to Priskorn’s music and to Sisu’s delivery.

Their set of eight Priskorn compositions ranged in affect from New Orleans funeral (I blame the walking tuba in Difference) and Latin tinges (Swag) to toe-tapping harmonized trumpet lines (5th Edition Revised) and the somber-yet-sonorous descending tetrachords of Aluminous.

Unsatisfied, the near-capacity and remarkably inter-generational audience clamored for more. Stoic, perseverant, and true to their name, Sisu was happy to oblige, cutting it loose for a final, freer, jazzier encore.