Pianist Jon Nakamatsu and clarinetist Jon Manasse joined Symphony Silicon Valley, under the baton of Leslie B. Dunner, to premiere Paquito d’Rivera’s Cape Cod Concerto this weekend at the California Theatre in San José. The new work is special in many ways, displaying layers of complexity, emotional depth, and outright fun. 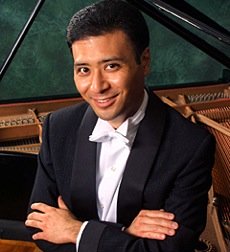 D’Rivera (b. 1948) is a renowned Cuban jazz saxophonist and composer who has received high musical honors: the National Medal of the Arts, the National Endowment for the Arts Jazz masters award, and a slew of Grammys. It was clear from the new concerto that he is well-deserving of the praise. Musically multilingual but always rooted in Afro-Cuban flavors, his movements vary in style in a way that four movements of a classical symphony vary — contrasting in character but unified by a consistent idiom. For example, a busy “New Yorkish” scene in the first movement was reminiscent of Gershwin’s Rhapsody in Blue; a hazy milonga (a relative of the tango) set a completely different tone, with much less activity but intensity going in another direction; the improvisatory third movement was sometimes completely out of metered time and at other times was highly rhythmic; the fourth movement deftly swung back and forth from Latin jazz dance club tunes to technical development of musical ideas worthy of the most academic composers.

The piece was special in many ways, appealing to a variety of artistic urges: from the ardent to the lighthearted; from scary to peaceful; from complexity to simplicity. A highlight of the third movement featured a member of the percussion section joining the soloists at the front of the stage with a pair of claves for a moment of free-spirited performer-to-performer interaction that’s rarely seen at classical orchestra concerts. Conductor Dunner, a champion of what’s called “Music of the African Diaspora,” was an ideal match for this piece, and he delivered a stimulating performance.

Nakamatsu and Manasse have a chemistry that only comes with dedication to each other. The Jon/Jon piano/clarinet duo recently recorded a pair of CDs: The Brahms Clarinet Sonatas plus a collection of jazzy pieces, including a duo version of the Cape Cod Concerto titled Cape Cod Files. Also on the CD is James Cohn’s virtuosic setting of Gershwin’s I Got Rhythm. Manasse introduced the piece by pointing to Nakamatsu at the keyboard and saying only, ”He’s got rhythm!” before playing the work as a preintermission encore.

The d’Rivera premiere was preceded by a work from another composer who established a unique language of his own by melding various styles: Igor Stravinsky. In his Pulcinella Suite, Stravinsky is liable at the end of any phrase to switch from Baroque concertato sections to neoclassical progressions (complete with trills) to ultraromantic melodies to 1920s jazz-inspired rhythms and harmonies to his own brash Petrushka-style orchestrations. At first, it seems bizarre, then funny, then it becomes a distinct natural language, and then quite abruptly, after countless short movements, the piece is over — leaving the audience unsure whether to chuckle, applaud, or wait for more. Dunner led the orchestra through the many musical epochs with a clear understanding of the gestures and shapes required in each style. The ensemble, for the most part, responded with enthusiasm. A highlight of the Stravinsky was the bizarrely orchestrated but somehow evocative duet for bass and trombone, which made for an ear-opening combination.

After intermission, Nakamatsu performed Tchaikovsky’s First Piano Concerto, which he recently played in Santa Rosa to high acclaim. A San José native, Nakamatsu is a frequent guest with Symphony Silicon Valley and other local groups since winning the Van Cliburn Competition. He is the antidote to Lang Lang–style showbiz pianists, for he plays with unpretentious honesty, backed by strong fingers and a modest amount of freedom. After his second rousing concerto of the night, Nakamatsu treated the audience to yet another encore: Mendelssohn’s Rondo Capriccioso.

Before the program began, Symphony Silicon Valley President Andrew Bales asked for Facebook votes in the Chase Community Giving program. The orchestra won $25,000 for reaching the finals and is now vying for the $2.5 million prize. The second round of voting begins May 19.