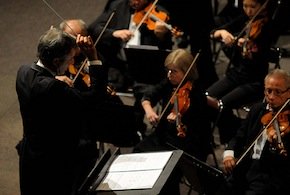 Symphony Silicon Valley, opening its 10th season on Saturday at the California Theatre in San José, wants to be thought of as “the (not so) little orchestra that could.” Although it has no music director (its president, Andrew Bales, chairs the administrative and coordinating parts of that function), it attracts conductors of regional orchestra music director stature. This week, that was Paul Polivnick, one of its most frequent podium guests. It has the financial and administrative resources to procure the extra players required to put on a big orchestral showpiece like Holst’s Planets, plus the talent and skill to play it well. And it has almost a composer in residence, in the form of 80-year-old classical–jazz fusion master David Amram, whose works have now been performed by the orchestra four times in its short life. As Amram noted with gratitude, that’s more exposure than most of the dead composers get.

Saturday’s concert was, I think, the first of these times that Amram performed on the stage, as well as composing. He played solo parts on the piano and what looked and sounded like a tin whistle in his Triple Concerto and both of these, plus percussion, in his En memoria de Chano Pozo. Pozo, a Cuban drummer who died young in 1948, is credited with introducing Afro-Cuban styles to American jazz. Amram’s piece is a scored realization of a semi-improvised work he performed on a goodwill trip to Cuba in 1977. As its Latin jazz origins would suggest, it’s a lively, energetic piece, which involved the audience more than casually, as Amram led us in a section of four-part, cross-rhythmic clapping.

Besides the composer, there was a small crowd of jazz performers, especially percussionists — most of them actual SSV musicians — in front. The orchestra chimed in with a beefy, big-band style accompaniment, led by the trumpets and more reminiscent of the clarionlike work of Harry James than the muted style of other big bands.

SSV played The Planets with cheerful extroversion and lots of fine solos.

The Triple Concerto, in three movements with three solo quintets, is a far bigger and more serious work, with Coplandesque Americana, post-tonal modernism, and Middle Eastern folk music among the classical side of its influences. The principal soloists were the jazz quintet. Besides Amram, this included three SSV members and a jazz professor from San José State: Bill Everett on double bass and electric bass guitar, Michael Corner playing an urgent and intense alto sax and Aaron Lington (the jazz prof) a suave baritone sax, and percussionist Kent Reed at a drum set. The wind and brass quintets, also seated at front and also consisting mostly of regular SSV musicians, had fewer solos and mostly played chorales together. In the last movement, when the music was slowing down to prepare for Amram’s tin whistle cadenza, the wind and brass players all blew air through their instruments, like a train blowing off steam to slow to a halt.

The only problem with this arrangement of players is that it left the main body of the orchestra with little more than the strings. While they had some good exposed moments, as accompanists to the jazz musicians they seemed overpillowy and superfluous. Nevertheless, they, like everyone else, played with enthusiasm and without too much chaos, making the concerto a better piece than I expected — and better than I remembered it from when SSV previously performed it, also under Polivnick’s direction, in 2005.

Fine Trip Among the Planets

After a first half like that, a really colorful second half is needed to avoid seeming dull and stultifying by contrast. SSV played The Planets with cheerful extroversion and lots of fine solos, particularly in the “Venus” movement, suggesting that Rimsky-Korsakov’s Scheherazade would have been an equally successful work in this slot. The orchestral sound was brash and projected with assurance. Even the bass oboe was loud enough to make the hearers sit up and take notice. The huge crashing chords in “Mars” and “Saturn” were executed with gratifying crispness. The sound in the big hymn tune in “Jupiter” was so full and rich that Polivnick could afford to pull way back on the intensity in the middle to build it up again later — a trick he also enacted, more gently, on the elegantly played encore, “Nimrod” from Elgar’s Enigma Variations. Polivnick also got the offstage chorus (the Cantabile Vocalise Singers and the women of the SSV Chorale) to fade away, softly and decisively, at the end of “Neptune.” And the theater’s mighty Wurlitzer organ packed the punch I always want to hear, but rarely do, at the climax moments of “Mars” and “Uranus.”

If there was a deficiency in this performance, it came in some of the trickier, fast, complex rhythmic sections, where ensemble was not all it could be. Nevertheless, the orchestra managed to avoid making the “Mercury” movement, the longest and most challenging of these sections, sound heavy or sluggish. Together with Amram’s works, it was a concert well worth the hearing. Symphony Silicon Valley’s season is off to a good start.