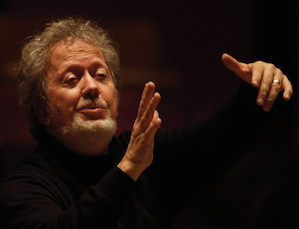 Usually when Symphony Silicon Valley performs a program of core Germanic masterpieces, such as Saturday’s California Theatre program featuring Beethoven and Brahms, George Cleve is brought in to conduct. Not this time. The man at the podium was a new name here in San José: John Nelson, former music director of the Indianapolis Symphony and the Caramoor Festival, who has his own distinctive way with this music.

And at the keyboard for Beethoven’s Piano Concerto No. 4 in G was Jeffrey Kahane, fully capable of conducting by himself. In a Mozart concerto he might have taken both parts, though Beethoven is considered a bit too complex for such double-duty. Kahane and Nelson are well acquainted, which made them — and the orchestra, which shone like a beacon — the ideal partners for this performance.

The Fourth is a fairly subdued, pastoral concerto. This performance brought out the edges in the music, and was altogether one of the most wonderful things I’ve heard from SSV. The slow movement in particular was the embodiment of the cooperative war between piano and orchestra that a concerto is ideally supposed to be. The secret was a surprisingly emphatic maximizing of the contrasts between the roles. Nelson conducted the orchestra in a heavy tutti, brusque and hasty. Then Kahane, leaning back at the bench as if relaxing in a hot tub (with all his concert wear on), played his misty-toned response in a slow, languid fashion. Another hasty tutti. Another languid response. Back and forth they went, like a pair of philosophers holding a dialectic argument.

It was not only fascinating, it was hilariously funny in a thoughtfully artistic way, and it was also beautiful. So much so that this rougher movement had the same delightful impact on the finale, which breaks out of it at the end, as the rapturous slow movement of Beethoven’s “Emperor” Concerto has on its finale: the presentation of the freshness and joy of a new day after a peaceful slumber. In this finale, the dialogue between piano and the ever-vigilant wind instruments had all the bite of a chamber work for that combination, like Beethoven’s own Op. 16 Quintet or Janáček’s Capriccio. Here and in the first movement, Kahane put strong attacks on his notes, playing crunchy trills and runs like the pouring of lyrical crystals over the stage. 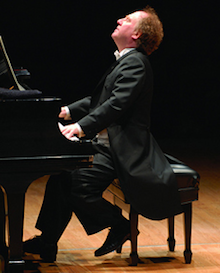 The other big work on the program was Brahms’ Symphony No. 1 in C Minor, one of the most solid and uncrunchable blocks of granite in the repertoire. Nelson handled this epic poem by emphasizing stresses and swells in the music, with whip-sharp conclusions to phrases. Where most performances spread out the tension in the first movement at the openings of the development and coda, Nelson plunged straight through. He cultivated a sandy tone in the strings and a punchiness in the winds, bringing out inner parts, most startlingly a counter-melody near the start of the Allegretto third movement for Michael Corner’s clarinet. Audible spotlights also appeared in the Andante sostenuto second movement on plaintive solos for Pamela Hakl’s oboe and Robin Mayforth’s violin.

The second movement was the one part that could have used more rehearsal. A number of uncoordinated entrances were enabled by Nelson’s emotionally expressive, rather than tightly beating, conducting. Elsewhere, he had given the musicians everything they needed for a precise, driven, and nearly impeccable performance. The music was thoughtful and heartfelt without turning ruminative.

Nowhere was this clearer than in the opening piece, Carl Maria von Weber’s Oberon Overture, the work that is said to have inspired Tennyson’s “horns of Elfland faintly blowing.” The chief of those horns was wielded by Meredith Brown, who has to begin the work cold with soft dolce calls. It takes the world’s greatest orchestras to not seriously risk bobbling something in here, and, by that criterion, SSV was a great orchestra on Ssaturday. The tone was warm and as Tennysonian as could be.

Nelson conducted this cornerstone of the Romantic repertoire with strong tempo shifts to shape the sections and the same sandy string tone of the Brahms. The piece conveyed a strong vision and a tangible atmosphere. Good job all around.