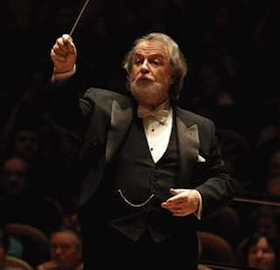 George Cleve was guest conductor for Symphony Silicon Valley in a meat-and-potatoes concert, with a tasty side dish, on Saturday at San Jose’s California Theatre. The works were all German/Austrian high classics, dating from a 20-year period around the turn of the 19th century, the kind of repertoire Cleve embraces with ease.

The meat in the meal metaphor has to be Beethoven’s Symphony No. 3 in E-flat, the “Eroica.” There isn’t a meatier symphony in the high-classical repertoire. While other Beethoven symphonies expand or contract in perceived size, depending on the conductor’s approach, the “Eroica” remains the same, solid-granite block no matter what the conductor does. The tighter the conductor tries to make it, the heavier and more vehement it becomes.

Cleve took the opposite approach. His lead was broad and expansive. Subjectively, this inflated the already-large symphony to world-spanning size, as it went blissfully onward — to the “heavenly length” that Robert Schumann ascribed to Schubert’s Great C Major, one of the first symphonies written on the model that the “Eroica” pioneered.

Instead of concentrating the energy, this spread it out in a quiet, exploratory way. The calm, regal approach gave an air to the performance more like what would be expected from the Schubert, or from Beethoven’s “Pastorale” Symphony. Of course, even the “Pastorale” isn’t entirely peaceful, and the moods of the “Eroica” range from the stormy intensity of the finale’s fugal episodes to the extended tragedy of the Funeral March. While the variety was there in this performance, only the scherzo showed more compacted intensity and liveliness than the rest.

That may make it sound boring. It was not, any more than a relaxed performance of the “Pastorale” need be. It was contemplative and thoughtful, a considerate walk through Beethoven’s wonders, guided by a conductor who knows it all, in the company of musicians who put on their most careful performing manners for a conducting style that wouldn’t allow skating over imperfections.

Cleve chose an antiphonal seating pattern for this concert, with the second violinists across the stage from the firsts. This allowed those inner voices to be heard clearly. Throughout the strings, clarity of line was exquisite. Even the double basses, tucked far behind the first violins and cellos, almost invisible from a seat in the front orchestra section, sent out a bold sound where needed to emphasize a line, as in the first-movement development.

It was contemplative and thoughtful, a considerate walk through Beethoven’s wonders, guided by a conductor who knows it all, in the company of musicians who put on their most careful performing manners.

The winds piped clearly, excellently balanced in strength with the strings in the chord-exchanging passages in the scherzo and finale, and the brass never blared. The only problem was with some of the wind solo passages over the rest of the orchestra. These were of unpredictably varying intensity: some startlingly loud, some almost inaudible where they should not have been.

If Haydn’s Symphony No. 100 in G, “Military,” was the potatoes of the concert, they were some spicy potatoes. This is the most colorful symphony of the dozen that Haydn wrote for his London concerts, and its nickname reveals the kind of spice it contains. Three percussionists (on triangle, cymbals, and bass drum) stood up solemnly in the back, along with the timpanist next to them, to provide clashing, marching-band punctuation to the second halves of the slow movement and finale.

There’s also an unexpected trumpet call to arms, which in this performance sounded broad and sleek, in keeping with Cleve’s conducting style. Transferred to Haydn, the same approach used for Beethoven revealed the courtly, genial old “Papa” Haydn characteristic of performances of 60 or 80 years ago. It combined calm slowness with a perkiness born of gentle humor.

As in the Beethoven, the winds were pungent. Haydn provides the winds with a large number of stand-out parts, starting with the opening theme of the first movement allegro for flute and oboes. The difficulty here came with the tempos. Conductor and musicians did not seem to be working together as smoothly as in the Beethoven, and there were some awkward and abrupt minor tempo changes.

Kramer’s reedy and buzzy sound mostly ran decorative rings around the melody in the orchestra.

The side dish on the menu was something extra-special and unusual: a bassoon concerto. Deborah Kramer, SSV’s principal, a tall, thin woman wielding a tall, thin instrument, worked her magic in Weber’s Andante and Hungarian Rondo, Op. 35. It’s a rather Italianate and operatic work, compared with the Haydn and Beethoven, though the orchestration is similar to theirs.

In the andante, Kramer’s reedy and buzzy sound mostly ran decorative rings around the melody in the orchestra. In the rondo, the bassoon had more chances to take the principal theme. Although it’s difficult to keep a bassoon under control in such virtuoso fine work, the brief concerto was fun and successful — a delightful and melodic piece well worth reviving. Members of the orchestra’s wind section tossed single roses over the heads of their colleagues at Kramer as she took her bows.